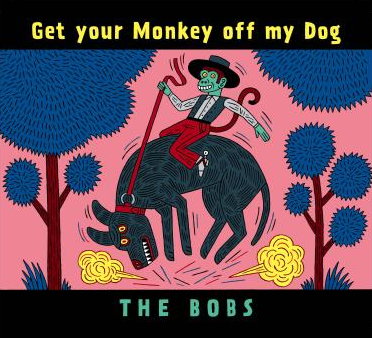 New original material from the Bobs! Praise the Lord and pass the biscuits. When a group has been around for this long, you don't get your hopes up waiting for the next creative leap forward. But oh when it comes, what a party!

The new album is terrific, too. The current Bobs line-up is one of the best ever, in purely vocal terms, and the new songs are varied and funny. Most of the time they find the sweet spot between silly and sophisticated, helped enormously by the good tunes. Okay, so they don't sound exactly like the old Bobs. But new Bobs Dan Schumacher and Amy Englehardt have so much talent. Their voices and songwriting round out the more familiar stylings of Matthew Stull and Richard Greene. As a whole, the album rocks.

What to praise first, and how? Come Here Often?, I think. It's a silly song about pickup lines with a killer rock-and-roll solo and a fantastic beat. The music is so good it could carry the phone book. Jokes in the lyrics are just icing. Elsewhere on the disc, Funk Shui Massacre is indeed funky, plus it features a satisfyingly over-the-top guest solo by ex-Bob Gunnar Madsen. The two Silver Lining shorts would be right at home on a They Might Be Giants album, and putting Disappointment Pants after Silver Lining II was a lovely touch.

There are some glorious details, too. Tight Pants Tango features Matthew Bob at his best since Slow Down Krishna. Plus the lyrics rhyme the "Argentines" with "Gregory Hines", "Balanchines" and "Ben Vereen". Genius. Some of the other songs are more obvious. Howard Peterson is an ode to all those former tenants who never paid their bills, whose creditors call you instead. And Never Date a Musician is an obvious laugh, particularly as narrated by another ex-Bob, Lori Rivera. But other songs are more subtle. Imaginary Tuba and Buddha Bakes are classic Richard Greene numbers — less immediately catchy, full of long notes, but with an avant garde slyness that gets better and better with every listen. And I confess, I'm rather fond of the Lynda Barry-esque Tom Spath.

This is a great album. Rather than take it for granted, we should all celebrate now that it's here.

The beloved Bobs are back to their old mischief with their latest album, Get Your Monkey Off My Dog. Rabid fans should rest assured that the quartet has lost none of their exuberant irreverence, with the liner notes listing an Iowa Best Western as a recording space and giving vocal credit for "dog breath", "hoo hah", and "additional yelling".

There's a bit of something for everyone here, on a collection of nineteen short tracks that span a range of genres and sounds. The bass lead and gothic trappings of Imaginary Tuba and Disappointment Pants wouldn't be out of place in a Tim Burton animated film. For those who seek comedy, Howard Peterson, a journey through an increasingly outlandish set of answering machine messages, had me in stitches even on the fourth listen. Listeners who crave musical complexity along with the witty lyrics will enjoy the funky, infectious groove pulsing through Come Here Often?, or the ringing dissonances that mark the album closer Hope. And just about everyone will love the rocking solo by alumna Lori Rivera on Never Date a Musician.

All this being said, Get Your Monkey Off My Dog isn't a flawless piece of work. I found a lot of the solo work to be shameless mugging rather than stunning delivery. The long playlist suffers a bit from inconsistency, with a few too many throwaway tracks such as Silver Lining and Tom Spath. And the distortion-heavy guitar solos on multiple songs were unnecessary anachronisms that dated an otherwise refreshing Bobs sound.

But none of these quibbles ultimately detract enough to sink an album that brings an exceptional amount of humor and originality to the table. The Bobs never take themselves too seriously, but that shouldn't prevent the rest of us from appreciating just how seriously good they are.

The Bobs are sort of the a cappella equivalent of Garrison Keillor. Wry, literate comedy, infused with a tablespoon of latent sexuality, executed precisely, if predictably. All the members of the group have taken the "Bob" moniker as their middle name, which is something you find amusing or merely tolerate. Get Your Monkey Off My Dog wholly embraces this paradigm.

I'll begin by saying the Bobs are outstanding musicians. Crisp vocals and clever arrangements abound on the album, and the musical style is never at odds with the irreverent material. The Tight Pants Tango contains as many musical peculiarities as lyrical, including a clever homage to Herbie Hancock's Rockit.

The whole package is bolstered by tasteful (or intentionally distasteful, as the need arises) production by group member Richard "Bob" Greene. Cow Tipping, Part II represents a good case study for how to showcase vital vocal lines that sit at middle frequencies. The album also makes sparing use of instrumentals, which is fine by me, but expect to hear them from time to time.

The soloists are marvelous, tackling a breadth of styles with a sort of mania that lets us in on the joke. With the exception of the histrionic Funk Shui Massacre (see below), they do so without feeling compelled to show us every single thing they can do with their wonderful vocal gifts. Collegiate groups, take note.

In short, the album is a technical triumph. But the musicianship is not intended to stand on its own merit, and it does not. I'm left, then, to assess whether or not the album is amusing. On this count, GYMOMD is a mixed bag.

The typical Bobs product induces more knowing smiles and nods than hearty laughs. Fair enough. The group would become unbearable were it to rely on one-off zingers. Too many of the songs on this album make the mistake of resting on the laurels of a solid comedic idea. The aforementioned tango could lead in any number of amusing directions, but instead focuses on the inability of one to reach his or her cell phone while wearing tight pants. The contortions involved are noted for their dissimilarity to ballet and the work of Gregory Hines. That's it?

The titular track expounds on a comedic concept that was thoroughly (and succinctly) explored in "Being John Malkovich". Monkey plus dog equals funny, not two times funny. I am aware that "feng" rhymes with "funk", but I am not sure this fact merits four minutes of real estate on a professional album. As for the ponderous David Mamet song, which utilizes the last name of celebrities as verbs in the past tense, is there a last name that sounds like "I don't get what they are trying to accomplish"?

I can think of a million reasons not to date a musician that do not require a "drummers are dumb" joke.

This is not to say that GYMOMD is a joyless experience. The Bobs are not afraid of abject ribaldry. The Sandwich Man, which contemplates the existence of a human sandwich board, delights with a rapid series of entendres from Amy "Bob" Engelhardt, who would very much like to consume him, metaphorically and otherwise. Imaginary Tuba gives us an adolescent playing with his imaginary horn in the basement. He "oompahs" very well, we are informed.

The Bobs have been funnier before (and they are occasionally funny here), but they have never sounded better than they do on Get Your Monkey Off My Dog. The Bobs are certainly to be credited for cultivating their own style. On that evidence alone, I can recommend this album. But if you are new to the group, or if their style isn't your kind of sandwich, there are more quintessential works to be found.

To order this album, visit CD Baby, Primarily A Cappella, or iTunes.