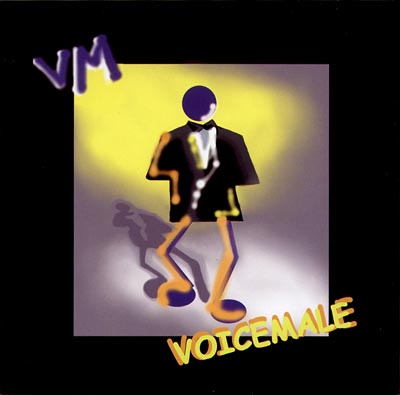 VoiceMale, Brandeis University's all-male a cappella group, wins the crowd on two strengths: energy and arranging. Even the average soloists put so much into their deliveries that you can't help but find yourself rooting for these underdogs. The repertoire is no-surprises pop, but the arrangements are truly dynamic. Rarely do I bother to check a collegiate group's arranger; rarely do the arrangements merit the effort. Here, my attention was repeatedly drawn to a compositional voice distinct from the songwriters', a voice that both enhanced and complemented the original. Imagine my smile when I saw 5 of 13 credits belong to the award-winning Samrat Chakrabarti. It seems VM's distinguished alumnus and founder still helps shape the sound of his ensemble. Even arrangements without his name show tell-tale signs of his signature attention to dynamics and syllabic sensitivities. Kudos to VM for honoring the past and taking it forward with transformative, out-of-the-box arrangements like Herrings' Hard to Say I'm Sorry.

The CD's production starts out on the quick and dirty side (particularly on hidden track Take It Back, where the engineering seriously detracts from the song). Tracks like Absolutely and September have some awkward miking. Tracks like Thank You have awkward EQ-ing. Naturalism dominates the production style. This suits the leads and backups just fine, but the VP and bass are left with slight anemia. However, this is inconsistent. On Hard to Say I'm Sorry, the bass is given noticeably enhanced with effects processing and a prominent place in the mix. Contrast that with September, where the bass has all the aggressive power of a 1940s AM radio broadcast. In the midst of this, tracks like Don't Cry have tasteful effects, EQ, and mixing. Either more time or more attention to detail would have helped bring all the tracks up to this level.

While occasional pitch and breath support issues rear their ugly heads in nearly every song, energetic, soulful and honest solo deliveries keep the listener's focus. Get swept up in the energy, and VoiceMale's technical imperfections will fall to the wayside.

VoiceMale, in terms of the arrangements (including distribution of voices and vowels/syllables accorded each part), the blend of backing voices, the intonation of both those voices and the solos, the overall sound of a rhythm section built upon bass and vp — with respect to all of these things, VoiceMale is the single most annoying collegiate a cappella album to have come my way.

Let me start again, and clarify: VoiceMale, the eponymous release from the Brandeis University all-male group of the same name, is not without redeeming features. Arrangements are complex, which can be both a good thing (Black Balloon) and a detriment (September). Some arrangements are just poorly executed (Lean on Me). Blend is better when the going gets slow (the intro to Don't Cry), but sometimes falters even then (Hard to Say I'm Sorry) and falls to the ground in a pant when the going gets quick (Absolutely). So, as with most groups, my reaction is a mix of "job well done" and "overly ambitious, I'm afraid" plus "trying too hard".

So where do I come up with "most annoying"? Two musical choices, intonation and rhythm, not so much aided as abetted by spotty studio work. Intonation is odd across the board, and painfully nasal at times — it sounds like (a) classical singers trying to sound "poppy" and (b) untrained singers with talent but, naturally, no training. Cases in point include soloists Ferguson, fine on 8 but ruined for the listener already by 1 and 5, and Benson, who sings through his nose the whole time (but whose take on Kravitz in Fly Away is nicely daring). Rhythm is frequently poor, and nowhere more so than where it is needed the most: bass and percussion. The bass, often a single voice, is behind much of the time, and percussion weaves in and out.

All of this is made more noticeable by a shoddy recording. According to the notes, the tracks were recorded at two separate places and mixed at a third. As a result, the first six tracks (except track five) are too loud in every part, resulting in cacophony. Levels are better from then on, but it still sounds as if the recorder and/or the mixer didn't know what to do with a cappella outside of homophony, much less with a separate bass and dedicated percussion (some tracks are marred by continuous lip-smacking or other distractions). Again, the result is a mess of sounds with no distinguishing qualities — undifferentiated a cappellic schizophrenia.

"Most annoying", then, in that, despite the noble efforts put in by the singers, despite the occasional real success, simply because of the overall sound, I will never listen to this disc again.

As a general rule, I try not to do too much research into a group whose album I am charged with reviewing. On the one hand, a little knowledge about the group's background can go a long way; on the other hand, I would hate for ancillary information to color my review too much. With that in mind, here's what happened when I sat down to review the third, self-titled, album from Brandeis University's VoiceMale (not to be confused with groups of the same name in Belgium or Utah).

The best arrangements on the album belong to an alum by the name of Samrat Chakrabarti. It was late in the evening (read: early in the morning) and for the life of me, I couldn't remember why I knew that name. After a little poking around in my CD collection, of course I discovered that this was indeed the same Samrat Chakrabarti who went on to work with Five O'Clock Shadow. OK, so no surprise his arrangements cook — he was already a talent in college. I then did an internet search for Samrat — my results are unimportant for the purposes of this review, but among the search hits was the RARB review for VoiceMale's last album Malestrom. This is where I get concerned that too much information may be a bad thing.

You see, I perused the comments of those who reviewed Malestrom, and I'm disappointed to report that with this third album VoiceMale definitely has progressed, but perhaps not to the point to which everyone hoped. Not having heard Malestrom, it's tough to assess, but for the most part, the guys seem to have honed their timing and blend significantly since their last effort. Even so, I would be lying if I said the album was not without occasional rushed or uneven entrances, and the occasional out-of-tune background chord (especially on the frequent slides). The guys have kept their eclectic mix of repertoire and should further be commended for an album order which really keeps the listener's interest. Although Chakrabarti's five arrangements are hands down the best the album has to offer, both in artistry and performance, former musical director Mike Schwartz also contributes several nice arrangements. At the same time, I worry for the future of the group somewhat as most of the contributions from current members are either partial transcriptions (of m-pact, Boys II Men and a disastrous Az Yet) or slightly over-ambitious (as in the case of Earth, Wind, and Fire's September).

What's more, a complaint from the Malestrom reviews regarding over-reaching T1's still remains valid — particularly in I Believe — and another prior comment regarding the vocal percussion not being quite as "rockin'" as one might hope for still applies as well. Re: the VP, whoever handles most of it (and I suspect it's the same person on most tracks, given the similarity of fills from song to song) is quite talented, but seems to be lacking one essential tool — the powerful, gut-thumpin' kick drum. Without it, the most sophisticated VP in the world still won't create a solid backbeat, and there are several tracks where this backbeat is precisely what's missing.

A few final comments: Why do a cappella covers? You'd be hard-pressed to do m-pact better than m-pact, so why try? (I thought I would feel the same about the Boys II Men track, but the arrangement and energy won me over.) Imitation is the sincerest form of flattery, but reproducing a tune simply because you can isn't terribly interesting. Also, a Malestrom reviewer noted that the group was overusing studio techniques. It's possible the group may have taken this note a bit too much to heart for this third album. With few exceptions, the album mix is exceedingly dry and any number of tracks might have been helped by a somewhat "wetter" sound (not to mention some minor tuning issues that would have been better masked). On the flip side, I am so pleased to see an a cappella group of 8-10 guys producing a sound equal to that of their larger contemporaries. Moreover, I applaud their decision to minimize overdubs so that the group on the album is the group you'll hear in performance.

Now, do you want to hear VoiceMale in performance? Or their album for that matter? I think you should. They're still missing that extra special something that will take them from good to great, but quibbles notwithstanding, it's still a fun listen.