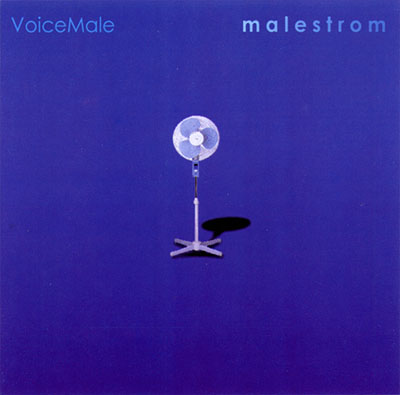 Like their last outing, VoiceMale's latest album, Malestrom, is an unevenly executed collection of songs. There's a lot of potential here, but it's not often realized. The biggest problem is that the CD is chock full of interesting, thoughtful arrangements, but rarely does the group follow through with them — there are problems with tuning, blend, and intonation, and it's hard to get past this on most of the tracks and fully enjoy the songs. There are some things to admire on this CD; unfortunately, there's not enough else going on that's worthwhile enough to recommend this album.

The vast majority of the arrangements are written (or co-written) by musical director Mike Schwartz, and for the most part he knows how to put a song together solidly. The CD's one original track is also from Schwartz, and while it lost me sonically at some points, it has a sufficiently funky chorus (think a heavy Brick House influence) to be engaging and accessible. Two arrangements are legacies from VM alum Samrat Chakrabarti, and the only other arrangement by a group member on his own is by Seth Panzer, who takes Hooch (the most inane song in the world, in my opinion) and actually jazzes it up a bit. I'm afraid the song loses something in practice, however — I really wanted to enjoy the scat solos in the middle, but there were too many pitches off to forgive.

VoiceMale makes substantial use of studio effects, usually appropriately for the songs, but sometimes to the point of being a distraction. It's kind of like what my mom always told me about wearing makeup — if it's obvious you're doing it, you've used too much. Some of the songs allow room for some over the top effects — Moe's quirky Spine of a Dog and Heaven on Their Minds from Jesus Christ Superstar — but others need a little more subtlety.

Another thing that disappointed me about this album was that not a single soloist inspired any interest from me at all. The best I can say is that many of them are fine, but most of them I couldn't remember once the CD stopped playing. (That's better than remembering the ones that got a little out of control, tuning-wise, I guess.) The show tune-y style that works ok on Heaven on Their Minds is out of place when the same soloist takes on Moxy Fruvous' Fell in Love, which needs a lighter touch. On some of the songs that are supposed to be funky, I got the feeling that I was getting the soloist's best George Michael impression. I'm sure the guys in this group have the funk in them, but I wasn't hearing much of it on this album.

All in all, this album is a lot more successful in concept than in execution. I'd like to chalk up my disappointment with the sound to a bad recording, but there are just too many tuning and blend problems, coupled with the group's growing adeptness with studio effects, to write it off like that. I listened for things to like about Malestrom, and I did find some, but in the end I didn't have very much fun listening to the CD.

One thing I give VoiceMale credit for is their song selection. Fairly diverse, and even the chosen a cappella covers are off the beaten path. And I also get the sense that they can probably get a crowd going in their live work.

Unfortunately, there was more about the album that I disliked than I liked. The first three arrangements were very blocky in execution, with lots of obviously repetitive stuff based around block chords. More could have been done with the arrangements, I felt...especially considering work by the same arranger later in the album shows marked improvement...making me wonder if the album is chronologically based. The two most impressive arrangements on the album were done by former member Samrat Chakrabarti, who went on to work with professional group Five O'Clock Shadow.

The other issue I have is with the overall...whininess, for lack of a better term. All the high tenor work comes across as screechy, and not all of it even tunes well (Brick House is a prime example of what I felt were singers singing beyond their range). I have to wonder why the arrangers would arrange that high when they don't have the T1's to do it justice. They tried to bury some of it, it seems, in studio effects, but the final result seems even more screechy than normal, and the effects take away from the song diversity, making the songs sound similar to one another.

I also have to wonder why they went with the number of a cappella covers that they did. No fewer than two songs were direct cover versions of existing a cappella songs by professional groups. I've said this before though..in my opinion, when doing a recording, why draw comparisons of yourself to the professionals that have already done the song? Sure, you enjoy the music..that's enough reason to do it live. But personally, I don't buy college albums to hear the group do HREF="http://www.rockapella.com/">Rockapella covers... if I want to hear Rockapella, I'll buy Rockapella. I want to hear college groups bringing something original to the table when they record...even if it's their interpretation of a pop song.

I can't recommend this album...it isn't bad, but there's better out there. That having been said, I can't wait to hear their next one, as they have shown some good growth since Flipside.

Baby steps. That is what Brandeis' VoiceMale has done with their latest CD. Their first album, Flipside was a CD released by the new group that should have been delayed a few years. Malestrom is taking over, giving the group a promising future to look toward. However, the group is still struggling with basic elements of becoming a strong collegiate a cappella group: Tuning, soloists, and tempo. (Their arrangements are definitely on the up-and-up!)

There is a lot of sloppy singing on the album, and the best way to describe it is that the sound is not clean. Notes and parts stand out where they shouldn't, entrances are late/early at times, and soloists are VERY out of tune at times. Often a syllable or phrase gets repeated throughout sections of a song, and it should sound relatively unified each time. (I'm not talking about dynamics, but a repeated part that adds layers to an arrangement.) The music never settles in some songs, even if the arrangement is solid. (See Soul to Squeeze.)

I'd like to ask why Heaven on Their Minds is on the CD. While doing a Broadway showtune is not entirely unheard of for a cappella, this song simply should not (and could not) be pulled off. I tried answering the question myself, and all I came up with was that the soloist sounded like he had a musical theater background and couldn't sing any other way. (This is just what is probably a far-fetched theory!)

After hearing both Flipside and Malestrom, I think the group should stick to the arranging skills they have now, but better soloists, a metronome, and maybe a MIDI track during recording would clean up the music. Wait again for another album by the group, but I have confidence they'll take another step in the right direction.

VoiceMale does some exciting stuff: their song choices are non-standard, they have strong energy almost across the board, and they dash things up with big chords, tasty syllables and tasteful percussion. Just about everything a guy group should do. That said, their are some minute tuning problems here and there, as well as some strange rhythmic starts and stops which suck the cool out of some tracks.

Impressive again (as on their previous album) is the complexity of their arrangements: no simple syllables, with the arrangers opting instead for often very lushly textured sounds and much syncopation. Although not made up of a great many voices, the group thus achieves a rich depth to their sound sometimes lacking in more choral collegiate a cappella. However, while they avoid sounding scattered despite such complexity, they do sometimes falter in their "togetherness" . . . as mentioned above, rhythm is sketchy on some tracks (Rockapella's I'll Walk with You the prime example; on VM's last album, too, a Rockapella cover game them trouble).

Percussion is tasteful although not always as rockin' as I could have liked. Soloists are quite credible, but never really outstanding; the tenor voices in particular can sound just a hair out of range on the highest notes.

Thankfully, not all is kvetch-worthy. Despite the troubles just gone over, most of the tracks on this album are enjoyable, and deserve a second listen. Sample some of these songs onto a tape and you're in business.

VoiceMale, a 9-man outfit from Brandeis University in Waltham, MA, serves up this 14-track set as their sophomore effort. As much as I'd like to talk about the hope and promise they show, and their ability to sound strong even compared to much larger groups, I am thoroughly disappointed by the inability to catch the tuning and set it in place.

And as much as I'd prefer to pinpoint one area, I cannot, as it seems to affect all portions of the group at differing times. The track scores you see listed from which I have offered seem to be in direct correlation to the level of tuning and blend in that track. Tracks such as Imagine, and Fell in Love, which could have been absolutely remarkable, especially the latter, fall victim to this as well. When the homework isn't done in the rehearsals, it shows through on the CD. No amount of post production electronic tweaking is going to cover up a track that is ill-tuned to begin with; distortion of that only results in a greater disparity in tuning.

A few times, Soul to Squeeze in particular, it seemed that all the mechanics were there for a really good track, but VoiceMale just took it slower than they may have liked, because the spontaneity was weighed down by the need for a beat. Were this an audio review of the recording, it would be easier to demonstrate, but when the beat takes over the spontaneity, it's like a giant metronome, that is larger or smaller depending on how portioned each beat is.

Sorry, guys, but when your last track is your best track, and there are some weak ones prior to it, it's not enough to base a recording on. Good luck on the next recording, and please do the homework.