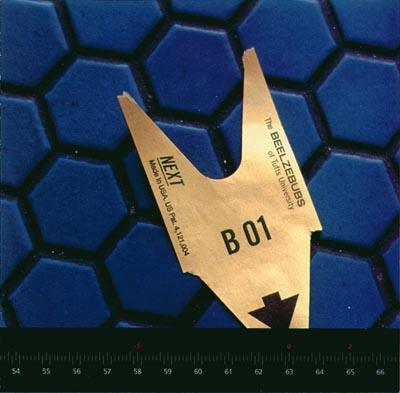 Nice new album from The Tufts Beelzebubs. Like Laila Ali and Jacqui Frazier, they are not the same as that which went before, but they still warrant attention for their way of keeping tradition alive.

Next opens with a Mighty Mighty Bosstones cover, a good choice that assures listeners that a solid bunch of busy, trendy-soloed modern rock covers will follow. Farther down the set list, they return to the envelope-pushing territory that made Beelzebubs such a household word in a cappella-land.

See, The Beelzebubs practically founded contemporary collegiate a cappella, back in 1990 or so. They were the first ones to look at pop radio as more than a source of novelty material, and they had the vision and the talent to open a whole new realm of possibility for what you could do with 15 voices. But down the road, the group lost its hold on the front lines. The Bubs' tuning and polish didn't improve at the same rate as that of their counterparts at Penn and Stanford and, lately, Indiana. They faded back toward the middle of the heap, with the added burden of each new Pink Floyd cover sounding like a rehash of what came before.

The spirit of Bubs past permeates this disc, most strongly in their reprise of the group's classic Major Tom/Space Oddity arrangement. It's still a great listen, and today sounds cool and retro with its doo-ey background and madrigal-esque bridge. Marty Fernandi ('85), Danny Lichenfeld ('93) and Todd Herzog ('94) all continue to shine on The Bubs' behalf. Meanwhile, the singular Deke Sharon ('91) produced the whole album and contributed two arrangements, a pretty Ghost Story and this year's Pink Floyd number, a version of The Trial that is more performance art than song.

Current Bubs don't allow themselves to be buried by all that alumni talent, however. Greg Binstock is this year's golden-voiced soloist, delivering a dynamite Either Way and leading the satisfying hip-hop of Bills, Bills, Bills. In The Bubs' hands, the Destiny's Child radio hit takes on Shai-like stylings and showcases their range. So does the Beastie Boys' So What'cha Want, albeit in more predictable and more grating fashion. And the group does a nice job with Hangin' Around despite only average musicality, giving the song more fun and more life than the self-conscious pop of the Counting Crows original.

All in all, it's a respectable effort and a solid addition to The Beelzebubs' discography. The current group isn't likely to make jaws drop or heads turn, but neither will they disappoint fans who expect good things from one of a cappella's strongest institutions.

I don't know if they meant to or not, but the Tufts Beelzebubs have recorded a concept album (and not just because it ends with a song from the ultimate concept album of all time, Pink Floyd's The Wall). In the Next liner notes, the 2001 Bubs speak of being part of "the continuum" of the group. And that's the concept: the relationship of the current incarnation of the group to the versions that came before it. Seven of the fourteen tracks are arranged by alumni: Jason Lifton '96, Danny Lichtenfeld '93, Todd Herzog '94, two by Marty Fernandi '85, and two by Deke Sharon '91. Speaking of Deke (of The House Jacks and CASA fame, in case you didn't know), he also produced the album. Jesse Silver '98 was the engineer and assistant producer. Paul Wang '95 designed the album (which, I must say, is the best design I've seen on any of the discs I've reviewed for RARB). Not enough alumni for you? Okay, try this on for size: one of the songs The Bubs cover is by Guster, a group that features Adam Gardner '95. If any group understands where they come from, it's The Bubs.

One of the alumni arrangements, the double cover of Major Tom and Space Oddity, had already appeared on an older Bubs album. I have to confess that I've been waiting for the Bubs to revisit this song with a new studio recording (the last time out it was a live track). Although this new version shows that the Bubs have learned a few new tricks since they first recorded it (like the nice mission control effects on the beginning of Space Oddity), on the whole The Bubs did a better job with this the first time out. On the Next recording, Space Oddity feels rather leaden, and the harmonies on Major Tom don't send chills down my spine the way they did on the live version.

Although the vintage Bubs pioneered many of the arrangement techniques that make modern a cappella work, they also knew how to keep it simple when the song called for it. That's still somewhat true on Next, but the current lineup seems to forget the part about keeping it clean on their cover of Hangin' Around. They focus so much on capturing the distorted guitar sounds that they lose the just-a-bunch-of-guys-hanging-around feel of the song. (In case you didn't know, in the original version a lot of the backing vocals were song by the Counting Crows and a bunch of their friends when they were all drunk off their asses.) The Bubs should have gone with a simple but energetic arrangement that sounded like a bunch of guys singing instead of like a bunch of guys trying to sound like a bunch of guitars. When the arrangement breaks down into simpler vocal lines at the end, you can get a glimpse of what the song could have sounded like. Although the arrangement of Love In an Elevator is enjoyably straightforward, the great lead vocals need to be mixed a little more prominently (or have an extra voice covering them), since they don't stand out from the background enough. As I said before, The Bubs can still keep it simple. Their version of James Taylor's You Can Close Your Eyes would have fit perfectly on any of the old Bubs' albums. Ditto for Stevie Wonder's Overjoyed.

But enough about the old school stuff. The Bubs have long been dabbling in R&B material, everything from U Can't Touch This to No Diggity. Their version of Bills, Bills, Bills is not only the best cut on the album, but also the the most successful cover of this sort that they've done. It's an alluring arrangement, complex and full of smooth harmonies, but it's also got lots of breathing room — the staccato rhythms aren't drowned in a flood of sound. The other real winners are Guster's Either Way (which builds to a powerful crescendo and was great song choice to begin with) and The Gipsy Kings' Bamboleo, which takes off with a great arrangement by Ed Boyer and a soaring lead vocal by Isaac Brody. Speaking of Ed Boyer, he also arranged Bills, Bills, Bills. And Disco Inferno. All told, he arranged SIX songs on this album. Six! That's every song on the album not arranged by an alumnus except for one (Hangin' Around). This would be the point where you should wonder about the future of the group ("what happens when he graduates?"), but don't start worrying. Unless my calculations are wrong, Boyer is a freshman! A freshman? Holy crap, where did they get this kid from?

On an unrelated note, I predict that the next Guster album will be huge. I base this not only on the fact that they seemed to have figured out how to really capture their sound in the studio on Lost and Gone Forever, but also on what I like to call "The A Cappella Indicator". I think that when radio stations aren't playing your songs, but college a cappella groups are singing them like crazy, that's a good indication that you've got a rapidly expanding collegiate following. I saw it happen with Sarah McLachlan, and I think it's happening now with Guster.

The Bubs have reached to the edge of the typical and acceptable range of male collegiate a cappella. Who would have thought a bunch of white guys (with a couple exceptions) could do a song by Destiny's Child and actually be good?

Their percussion is flawless, as is their use of studio effects. The Bubs have great energy on their upbeat songs, and their arrangements are mostly percussive and complex. The Bubs' style is best displayed in the fun Disco Inferno and Hangin' Around, while Love In an Elevator is a bit brash and The Trial somewhat unintelligible.

With the exception of Overjoyed, which is carried by the soloist's lush and beautiful voice, The Bubs' ballads lack energy. Here too, pitch and blend issues are more easily heard. I would have liked to see some of the complexity of their fast arrangements in the slower arrangements.

The best song on the album is the cover of So What'cha Want by the Beastie Boys. Rap is almost never done in a cappella. There isn't a lot of background music to work with while arranging, and most groups can't pull it off. Not so for The Bubs. Ed Boyer created a full and interesting arrangement, they used studio effects well, and the song is performed with serious flair.

Next is a good album and worthy of being in your a cappella collection. Now excuse me while I listen to So What'cha Want again.