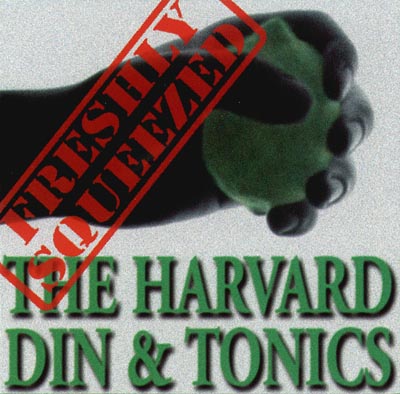 The Harvard Din and Tonics are an old-school collegiate a cappella group not afraid to keep the classics alive and kicking. On this album, you'll hear traditional favorites like Shenandoah, various Gershwin tracks, jazz standards like Route 66, and a couple of Barry Manilow songs for flavor. These guys do it all; they just don't do it all well.

Some soloists on this project were outstanding. Jesse Billett on Round Midnight, Eric Hughes on Night and Day, and Jay Wiley on With You were my three favorite leads. Some soloists were trying to sing out of their range in parts of their songs (Stompin' at the Savoy), and others just didn't bring passion and excitement into the song (Shenandoah).

Tuning was great on some extremely tough chords, but then would fall apart on basic major/minor chords. Dynamics didn't exist over most of the project, and arranging tended toward the weaker side. Most of the up-tempo charts were square (Sh'Boom) and very un-energetic.

The bass voices in the Din and Tonics didn't seem to have a true bass range. Maybe they were just mixed too far in the back, but I never heard a nice warm, resonating bass note on this project. Most of the basses tended to be punchy and shaky on pitches that should be comfortable for most basses.

The best track on the album is the final track, My Lord, What A Morning. The chords in this track seamlessly lock, ringing columns of perfection through Harvard's concert hall.

These guys sing songs that most collegiate groups won't even go near. They deserve a lot of credit for this project even though it doesn't match up well against a lot of other collegiate a cappella out there. My advice to the a cappella consumer would be that if you like the tracks on this album, buy it. You won't find many other collegiate groups singing these charts, making this album a nice addition to any collection. If you don't like these tracks, then just smile and walk on by.

I probably shouldn't pick any fights with the Ivy League, having graduated from an Ancient Eight school myself (okay, Penn, but it is in the Ivies), but there's something about the Harvard Din & Tonics and their ninth album, Freshly Squeezed, that is just so typically, well, Harvard.

At 22 tracks, it's a marathon of mostly snappy classics from the '30s, '40s and '50s rendered in a style which might best be defined as "glee-cappella" — a synthesis of the more choral, rounded sounds of classic glee club singing with the a cappella sensibility of, say, a barbershop quartet (in this case quindectet and tetradectet) or vocal jazz ensemble.

The men of the Din & Tonics fancy themselves young Sinatras, Bennetts and Crosbys (Bing, not David), and they revel in the schmaltz-laden, loungy style which defined popular music in the mid-20th century. You can practically hear the wink in their eye, the dimple in their cheek as they deliver their easy-listening lineup. Frankly, their sound does nothing to dispel the stereotype of "Hah-vahd" lockjaw. It's music to grab a martini, wear an ascot, and sit in an oak-paneled room by.

Now, don't get me wrong. Gershwin, Porter, Kern, and Berlin are among my faves. In fact, being a lover of big band jazz and having spent 4 years in a collegiate glee club, I was excited just by perusing the track list on the back cover. It was therefore all the more disappointing to find the album, though technically accomplished, really rather "blah".

No question, these guys can sing. Indeed, for such a small ensemble, they create an impressively large, choral sound with lush, shimmering chords and (almost) spot-on tuning (OK, recording in an echoey venue doesn't hurt either). But unfortunately, the interesting stuff ends there. Their arrangements are painfully generic, using the same techniques, syllables, and moving seventh harmonies in song after song. Were the album half its length, the redundancy would likely not be as apparent, but at least 7 or 8 of the more uptempo arrangements seem virtually interchangeable. While the intonation is first rate, there are other technical elements which turn sloppy at times. Fortissimos often sound oversung (the "Din" in "Din & Tonics" is sometimes literal), rushed tempos pop up now and again, and the "d" in "dum" or "doom" has an unfortunate tendency to become "tzoom", which saps the crispness of sound needed for this type of singing.

But more than any other single, occasional complaint, what this album desperately needs can be summed up in one word: feel. Maybe it's the arrangements (many have been sung by the group for years, likely the same way), maybe it's the musical direction, but songs like Georgia on My Mind and The Way You Look Tonight aren't torn from the same cloth; songs like Sam, You Made the Pants Too Long and It's De-lovely should not run together in my head. There's a sameness to their style which simply didn't sustain my interest. Somehow, as interpreted by the Din & Tonics, many of my favorite tunes go down like toast without butter.

What's more, a few tracks are simply disastrous choices for this group — my quibbles aside, this group is best at singing what they know. Attempts at Barry Manilow or En Vogue (yes, you heard me) are ill-advised and, at times, borderline embarrassing. Their showtune covers — With You and Almost Like Being In Love — are unremarkable, nothing more or less (n.b.: m-pact has of late been performing a fresh, smooth-as-silk version of the latter). If the fellows want to experiment and branch out, better they should stick with tracks like Shenandoah — a re-harmonized treatment of a classic (I still prefer the Marshall Bartholomew version, but he was a Yalie after all) — or Thelonious Monk's 'Round Midnight, one of the first a cappella versions I've liked.

The Din & Tonics have been around for more than 22 years, and no doubt their legions of alumni will wax nostalgic when sampling Freshly Squeezed. For the rest of us, the pulp probably won't taste quite as good.

When I read the liner notes of the Harvard Din & Tonics' latest album, my heart skipped a beat. Before I listened to the album, the group blurb informed me that the Dins had "abandoned the safety net of a professional recording studio in favor of the live acoustic of Harvard's best performance halls.". Imagining a brave step into the purest form of a cappella, I was dreading the results. Studios can put each person on a separate track. It is a simple job then to cut, paste, shift, and adjust volume levels using ProTools. Flat notes can be fixed with Autotune, and a proficient engineer knows just how many cool effects to include. While I was pleasantly surprised at the quality of Freshly Squeezed, it only made me yearn for the sound that could have been. The Din & Tonics' music is often from the Gershwin era, and thus needs little studio magic. However, the levels between solo and background are often uneven, especially in Almost Like Bein' In Love and Fascinatin' Rhythm, where the soloist overpowers the background vocals. There are a few pitch issues, most notably at the end of The Girl From Ipanema, and while most of the tempos are just fine, a studio's ability to provide a simple click track would have helped.

These men have nearly flawless harmonies and combine them with a pure sound and sweet blend. Jason Belk provides a sultry solo for Georgia on My Mind, and Steve Toub's tenor completely captures the feel and sound of the 1950s. My favorite track was Puttin' on the Ritz, which began and ended with beautiful harmony, and featured a fun scatting interlude. The one track that seemed out of place was En Vogue's Never Gonna Get It. I'm sure that when performed live, this song is hilarious and wonderful with fun and sexy choreography. When recorded, the thin arrangement and the pitchy and uncontrolled runs are not enough to carry a purely audio version. My main suggestion to the group is to think more about song choice and get back into a studio. All in all, this is a good album with some fine songs. If you like a more produced sound, pass this one by. If you enjoy pure old-fashioned a cappella, this is the way to go. Just skip track 21!

Freshly Squeezed is available for purchase at Collegiate Acappella.com and Mainely A Cappella, or by sending your request to cds@dins.org.