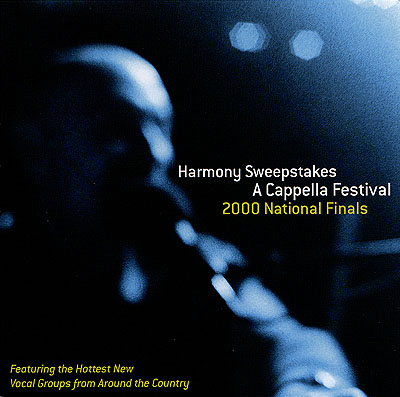 Harmony Sweepstakes albums serve only a few useful purposes. They are a sampler of the current state of the art form and a chance to get a taste of new groups from around the U.S. And they are a compendium of live recordings for concert album aficionados and superfans.

Version 2000 serves up a talented bunch of groups, with a very high overall quality of sound. But it comes up short in delivering to its core audience. The album has no flow and very little connection between songs, and the information in the liner notes is shockingly wanting. So of the basic constituents, only the superfans will come away happy. They get a reasonably high quality live recording to add to their collection of whichever groups they follow. They don't need to be told who the soloists are or where the band came from or whether their favorite won the event. They already know.

The rest of us are out in the cold. Most of these groups were new to me, and I quite enjoyed the sampler aspect. They all sound pretty good, some of them sound great, and I thought the disc was a nice introduction. Or it would have been, had the insert contained any information at all about where the groups were from, who sang their solos, who inspired their (mostly cover) arrangements, and which ones chose to perform original numbers.

This disc is a contest album that doesn't bother to name the winner. Talk about shallow.

At least you can't fault the groups. Toxic Audio turns in a lovely, scat-filled jazz number to open the recording, breathing new life into the cliche "breathing new life into an old standard". Some woman in the All-Star Vocal Band delivers a power-house solo on Don't Stop Believing, truly a standout performance, and Perfect Gentlemen sounds like one of the least square barbershop groups you'll hear, without giving up that trademark champion-quartet polish.

There's a refreshing amount of variety and a refreshing lack of House Jacks wannabes. The only thing missing is a little context.

Quite frankly, this disc doesn't have much to recommend it. It contains a selection of songs from groups who did well during the Harmony Sweeps last year. It thus represents a range of musical styles and group compositions, from jazz to semi-classical and from one gender to the next. As such it offers a fairly good cross-section of (at least award winning) contemporary a cappella.

So why doesn't it work?

The recordings themselves are of relatively poor quality. Because of this problem, the disc would best serve as a memento for people present at the performance, but loses a lot of repeat listenability. Beyond the sound quality, group tuning is good overall but blend tends to falter. Perhaps this is also only a function of the recording process, but it makes a difference for the worse, as the point of a disc, after all, is to present a listenable recording. This one, unfortunately, does not.

The songs as songs aren't much better. Let me qualify that a bit; I've seen some of the included groups in performance, and they sound much better and seem like more fun. By the same token, I've listened to studio recordings of some of these groups, and, again, the sound is much better. So I think that the groups could have done quite well. But the songs on this disc just don't do it for me. They aren't bad, but they aren't great.

As usual, I'm left with a mild confusion as to why this sort of disc comes my (or any reviewer's) way. All of the groups and songs it brings together have already been reviewed as part of the Sweeps process. No matter. This disc just isn't that great.

Every year for the past sixteen years, the Harmony Sweepstakes, a national competition of a cappella, has been held. Regional competitions around the country ultimately result in a finals concert/competition in San Rafael, CA. This is the live recording of that final concert in the spring of 2000. Each competing group is represented by two tracks on this compilation.

Overall, the groups are very good. But there was very little on here that truly blew me away. The champion group of the 2000 Harmony Sweepstakes was Florida-based Toxic Audio. These guys are just great. I've seen them perform a couple of times and they are better, by far, than any of the other groups who competed in the Sweeps in 2000. Their tracks on this recording sound very good and are a very accurate representation of what this group sounds like live. What it doesn't show is how they look and move on stage. Toxic Audio is a group of very polished performers and it definitely shows.

Naturally Seven appears on this recording as the hosts of the competition, having won the year before. I took some notes to myself while listening to this album and I accidentally wrote their name as "Take Seven". It was totally subconscious (made me chuckle when I noticed it), but pretty accurate. These guys have that smooth Take 6 sound. They're not quite as polished and kick-ass as Take 6, but still very good.

Another favorite of mine is The Exboyfriends. I have seen them perform as well, and let me tell you, these guys really rock. They're not into much movement on stage, but I think this is a good thing. It lets them focus more energy on the singing. They don't do any vocal percussion, but one of the members slaps his stomach as percussion (very interesting). It looks painful, but I'm told it is not. I just love their version of Ramble On on this album.

The other groups are good. Not amazing, but very good. I did notice the diversity of styles in these groups. There were jazz, barbershop, R&B, and rock groups. I was sad to hear very little vocal percussion and even sadder to hear a lack of good vocal percussion (although Rene's percussion on Route 66 was good).

The recording quality is quite good for a live album. I would recommend purchasing this CD if you really wanted to attend the competition but couldn't.