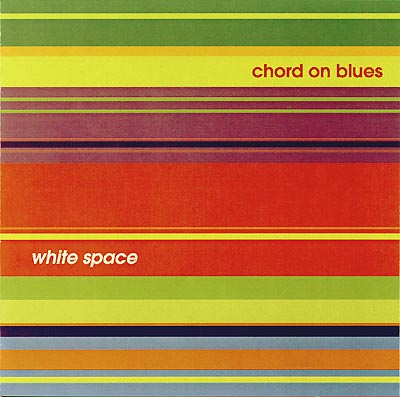 Chord On Blues comes across on this album as if they just aren't any good. A number of things combine to create this impression: slippery tuning made worse by relatively complex arrangements, intonation inappropriate for given songs and internally inconsistent, and soloists who strive for effect and often end up only overemoting. The result is a disc which is a chore to listen to.

There are some good spots. The singers are fairly high-energy, a fact aided by the arrangements themselves, which in the hands (throats?) of another group could be interesting to hear. But in the Chord On Blues' throats (hands?), the effect is sloppy, overdone and out of control.

Finally, the overall effect is affected by the studio work. The intrusive acoustics of the recording space are very audible on the tracks, adding extra echo that is in no way needed or desired. This is a common problem for which the singers are of course not to blame. Studios sometimes just don't know what to do with a cappella. It's a shame.

Chord On Blues has potential. Their future albums could really shine. In the meantime, though, there are too many factors working against them for White Space to be worth it. Take a pass, and wait and see.

White Space, from the University of Pennsylvania Chord On Blues, definitively puts to rest the theory that there's something in the West Philly water that turns ordinary Ivy Leaguers into a cappella superheroes. It's official: the Penn kids are mortal like the rest of us.

A word of advice to groups: don't claim in your press kit that you are the "premiere all male a cappella group" at a powerhouse university, as Chord On Blues did, unless your CD is going to deliver the goods. Chord On Blues did not do themselves a favor by inviting comparison with the recorded work of Pennsylvania Six-5000 or Penn Masala. Speaking of groups at Penn, did you ever wonder where Off the Beat and The Counterparts get those terrific soloists? Apparently from the same audition pool as Chord On Blues. It shows.

Certainly, White Space has its strengths. I applaud the natural, live-sounding style of Chord On Blues. I enjoyed Ross Josephson's solo on Crazy. The group has great energy, although we're not talking about the explosive, mop-the-testosterone-off-the-stage energy often associated with male college groups. The setlist balances commonly-covered songs with more creative repertoire choices.

But White Space sounds like the debut album from a young group, not a group that's been around for 15 or 20 years. Since sour tuning is my pet peeve, that jumped out at me first; I didn't hear one perfect chord in the 47 minutes of White Space. Most listeners will take greater issue with the soloists, nearly all of whom are struggling with their sustain, range, and confidence. The production makes the block sound distant and muddy throughout. To top things off, the CD features amateurish vocal percussion, imprecise rhythm, and mostly unexciting arrangements.

I'm sure that Chord On Blues worked their butts off to put this CD together, but there just isn't a single song I want to listen to again. The flaws are so basic, and so pervasive, and Chord On Blues have had so long to work on them, that it's hard to be optimistic about the next album.

I found Chord On Blues' White Space to be a bit disappointing, with four reasonably good tracks, three average numbers, and five where my fingers itched for the "next" button. Not a good ratio, really.

Sadly, this album is littered with tracks suffering from major timing problems, over-singing, and boredom.

Died in Your Arms Tonight made me jump when I first played it. The soloist, Tommy Lee, is shouting more than singing. King of Wishful Thinking is like a car with a clutch problem. The speed varies, and it's obvious from the way the lead is singing ahead of the rest of the group that he would like the rest of them to speed up. The whole track just sounds laboured.

Then when I got to the middle of the album, it took a sudden change for the better. Summer Romance, Wicked Game, and I Adore Mi Amor are so much better than the rest of the album, although still missing that special ping that would receive a 5 from me. These tracks were smoother, better sung, and had nicer arrangements and a fuller sound.

The last track on the album, Crazy, is just a mess. The chords are all over the place, and the arrangement just doesn't work. I couldn't even identify the song until I looked at the insert, and I have Seal's album!

White Space is basically an average album in the world of college a cappella. Unless you're a friend, or related to them, I wouldn't bother to rush out and buy your own copy.

CDs are $12 + shipping. To order, send email to tommylee@sas.upenn.edu.