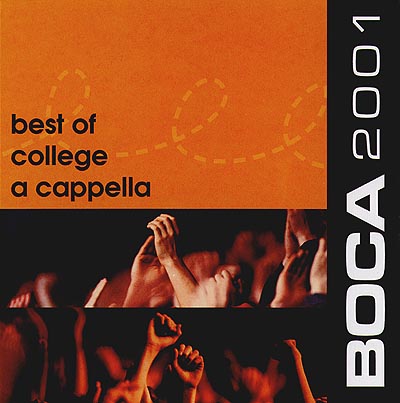 This latest in the "Best of ... " series is a good album. I know that "album" is normally supposed to mean a musical opus a bit more coherent than this compilation. Usually it means the results of a single group's efforts, often based upon a single theme. Despite the number of groups represented here, covering the full range of diverse repertoire that collegiate a cappella is known for, the disc presents a fairly unified feel from start to finish. So, a good album.

Why not great? The tracks have a similar sound, showing obvious technical proficiency both behind the microphone and in the engineer's chair, but at times the groups seem to sing more for the notes than for the overall feel. Undergraduate a cappella has been known to go too far in the other direction, but the result on this disc, despite its polish, is often boring and occasionally heartless.

There are some standouts. Good Enough is lush and heartfelt. Someday is well-sung, and strays far enough from taking itself seriously to remain charming. Inside Out has that funk that only an all-male group can generate (musically and somatically). And I should stress that the rest isn't bad, is often quite good, indeed — just not ear-blowing.

BOCA 2001 deserves praise for being part of a series presenting such consistently listenable discs, er, albums. A good album in a good series.

BOCA 2001 is the newest installment in the Best of Collegiate A Cappella series put out by Varsity Vocals and CASA. Every year, a small group of lucky people get to listen to dozens and dozens of CDs sent by college groups around the country with the hope that they might be on the next album. These people pick the 15-20 best songs in the land, and put them on one disc for all to hear. That being said, if this album weren't excellent, then there would be something wrong with either the college groups or the people choosing the selections. Fortunately, this one meets the standards, so we don't have to ask those questions.

I have had the privilege of reviewing BOCA albums before, and seriously considered copying past reviews and sending them in for this one. There really isn't too much to say. Each song is full of energy, with lots of detail placed on tuning and blend. The soloists all sound great as well. All of the groups should be proud to be on this CD.

I will warn, however, that most of the selections are "plugged in", meaning that lots of effects were used in the studio to create the sound. This is especially evident in tracks like Inside Out by The Xtension Chords. They use effects that are not available for most college groups to use live, creating an extremely distorted background. If you listen closely, you'll hear that it is done to hide a weak arrangement. This type of track always make me wonder what the group does with the song live. I would much rather hear tracks like Happy Together that present a more honest collegiate sound.

I'd also like to discuss Rainbow Connection. The track on this disc has a beautiful arrangement performed to perfection. I do have a problem with it, though. This song, like any song sung by a Muppet, presents a Catch-22. If you don't sing it like Kermit, the song isn't as recognizable; if you do sing it like Kermit, it sounds like you're mocking the song and the beautiful message that it is trying to convey. This one goes back and forth between the two. I would prefer to hear someone who is not trying to sing like Kermit. First, the voice is to too difficult to reproduce perfectly. And second, it's way too distracting to listen to. Unfortunately, because of the solo, this wasn't one of my favorite tracks on this CD.

For anyone new to a cappella, this CD is a must-have (along with all the other BOCAs). It is a great way to get to know groups from around the country that you might not always hear about. Anyone not new to a cappella probably owns this one already and is eagerly awaiting BOCA 2002.

Many times over many years I have wondered where a cappella music would go next. Have we heard the best that barbershop, sacred, modern, and college groups have to offer? Is the five-seven chord I heard in 1980 the best I'm ever gonna hear? I'm sure we all realize that there is only so much that the human voice can do, even when modestly embellished by electronics. What can the new millennium offer us that the previous one has not already presented?

BOCA 2001 replies, "You have only heard the warm-up acts! A cappella has a long journey ahead of it!".

This is one of the best CDs I have ever heard. Granted, it is the best cuts available from college groups from the last year. Yet it is a substantial step ahead of last year's BOCA 2K. None of the groups or fans of last year's CD should feel badly about what is only a year old. It was very good. This latest best-of demonstrates that each year the college scene is moving forward. The collegians are expecting more out of themselves, their groups, and the tracks that they press onto aluminum. And the winners are the fans of a cappella.

BOCA 2001 has song styles that are at the extremes. Listen to tracks 8 and 9. Both are for dancing. You could play Ray of Light by the USC Sirens at any high-energy dance club. And yet when the DJ allows the music to slow for that kinder, gentler style of dance, you could hear the U of Rochester Yellowjackets' Now and Forever.

BOCA 2001 demonstrates a breadth of skills. Stanford U's Mixed Company is so legato and lush on Good Enough. Yet, Iowa State's Shaggy Boys bang the percussion vocals anything but smoothly on Owner of a Lonely Heart.

This CD has lots of variety. Contrast BC's Bostonians' version of Uninvited with That One of Utah State singing Kermit's favorite, Rainbow Connection.

This disc tells me that the current crop of collegiate vocalists understands that what they and their peers did last year is not good enough for next year. It tells me that each year, the new talent is better skilled at taking raw spots off sheet music and turning them into aural pleasures. It tells me that we, the fans of a cappella, have a long, long ride before we actually reach the end of the human vocal apparatus' ability.

BOCA 2001 starts the journey for the next thousand years. Long live a cappella.