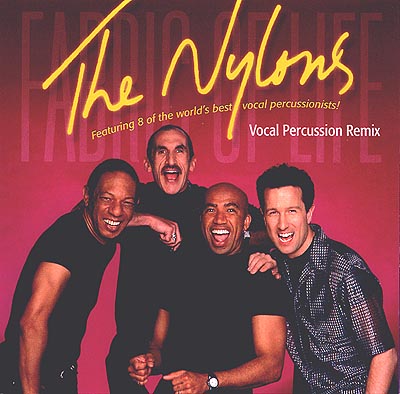 The "Vocal Percussion Remix" of The Nylons' Fabric of Life is everything I was hoping for from The Nylons and more. Not only have they finally gotten rid of the drum machine and replaced it with some vocal percussion on most of the tracks, but they've added a twist. They picked eight different vocal percussionists, one for each of the tracks featuring vocal percussion. The cover boasts that they are "8 of the world's best" and with a list that includes names like Jeff Thacher (of Rockapella), Andrew Chaikin (The House Jacks), Wes Carroll (also from The House Jacks), and Gabe Rutman (spiralmouth), you'd be hard pressed to disagree. And yet, in spite of all of this, the album left me cold.

I've always been critical of The Nylons' use of drum machines, not only because I thought the tinny sound was at odds with the a cappella sound, but also because I thought their arrangements used the drum machine as a crutch. Replacing the machine with people is a huge help, but the arrangements still feel empty. Maybe I'm spoiled by listening to so many college groups with 14 voices, but I know that 4 voices are capable of more complex arrangements than this. It's very telling that The Nylons often sound best on the tracks that feature instrumental accompaniment, like the keyboard line of I Can't Go For That. It makes you think that as long as they were inviting the VPs from other groups to help flesh out the percussion tracks, they should have just gone the distance and invited whole groups to help flesh out the backing vocals, too.

There are two types of people who should get this album. The first is Nylons fans. Sure, the album has a few rough spots, particularly the puzzling musical fragments Comfort and Joy parts I and II, both of which mysteriously fade out. (Part I heads for the doors after 20 seconds, and Part II only last 30 seconds before it starts fading out.) But overall, the VP improves The Nylons' sound considerably. If you liked them before, you're going to love them now.

The other group of people who are bound to enjoy this album are people who are studying vocal percussion. While the album doesn't work as a showcase for the VPs, anybody who's actively studying will appreciate the chance to hear some real pros do their thing. It's pretty easy to focus on what's going on in the percussion lines because they are very clean and unprocessed. Also, The Nylons' simple arrangements and breathy performances may hurt the album, but it makes it easy to concentrate on the percussion parts.

You there, lover of a cappella, here's a tip: buy The Nylons' Fabric of Life Vocal Percussion Remix. In addition to the sweet harmonies of the Canadian kings of pop a cappella, this version of Fabric of Life showcases the dextrous and spit-laden mouthings of such vocal percussion luminaries as Jeff Thacher of Rockapella, Wes Carroll of The House Jacks, and David "Stack" Stackhouse of Five O'Clock Shadow. If that weren't enough, we are treated to the semi-retired VP talents of groundbreakers Andrew Chaikin (formerly of The House Jacks) and Matthew Selby (formerly of m-pact). Top that off with funnyman Joe Bob Finetti of The Bobs, Owen Knudsen of The Knudsen Brothers, and studio magician and spiralmouth-er Gabe Rutman and you've got more than your money's worth. Wanna-VPs, listen and learn. Everybody else, time to get yo groove on.

While I'm happy to critique Fabric for you, I think that this is one CD that you'll prefer to critique for yourself. Do you prefer Selby's naturalistic sounds or Carroll's high realism? Or perhaps Thacher's mix of realism and human gasps? How does Stack do when he's the VP instead of the entire rhythm section? Who's the Jackiest Jack? Carroll or Chaikin? What does Jackiest even mean? Who knows? Who cares? This CD isn't just good listening, it's a conversation piece.

Oh yeah, I almost forgot. The Nylons! How about the stars? Slick production. '80s pop sensibility. Good-time fun. Artistically ground-breaking? Hmmm, not so much. But it's pop, and it's fun! I said slickly produced, right? So what else do you want?

In all seriousness, The Nylons' coolest moments are the groovy, funky Monkey and the perfectly '80s I Can't Go for That. The former features Gavin Hope in a gritty, soul-influenced rendition of the George Michael classic, while the latter features Daryl Hall sound-a-like Garth Mosbaugh and kickin' fiddler Ashley MacIsaac. The addition of the Riverdance-style fiddle solo works surprisingly well. Arrangers would do well to see how an '80s classic can be updated while remaining true to the original. And as an afterthought, I should warn you purists that several tracks do have backing drums and instruments.

Wrap-up: I think this one is a must-own for VPs and fun disc for the rest of us. Definitely one of the best releases of the year.

I have had the pleasure of hearing four of these great percussionists live (Gabe Rutman, Andrew Chaikin, Jeff Thacher, Wes Carroll), and they do not disappoint on this vocal percussion remix.

The album is upbeat, snappy, and the songs alternate between vocal percussion and real percussion instruments. The last track even throws in a saxophone solo. Since using drum tracks is one of the breakthroughs the Nylons made, I won't quibble over the definition of a cappella.

My favorite song by far is Ai No Corrida. As a Beach Boys fan, I always love hearing high, tight male harmony, and the Nylons do it so well.

I felt a bit sorry for Mark Cassius, the Nylons' newest member and replacement of Gavin Hope. He is not musically on this album one bit, but he is in all the pictures. Mark points out, though, that he now performs these songs live with the group.

This is a great album, and worthy of a place in your collection, unless of course you already own all of these songs on the previous release of Fabric of Life. I doubt the vocal percussionists make enough of a difference to justify buying this disc too!

Available from Mainely A Cappella