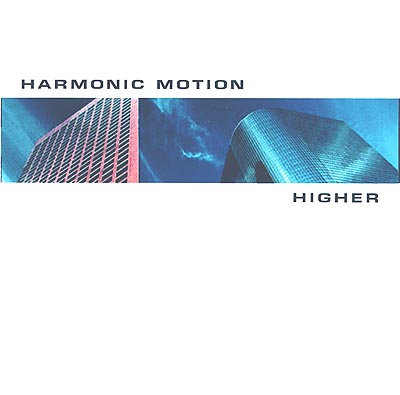 The first album by Harmonic Motion, From the Ground Up, seemed too good to possibly be a debut recording. But it must have indeed been the group's freshman effort, because the follow-up album, Higher, shows all the signs of a sophomore slump.

Harmonic Motion has clearly been maturing as a group between recordings. Higher is more polished and more consistent than its predecessor was. From the Ground Up boasted an impressive first act, but it all fell apart after intermission. Higher, on the other hand, is even-keeled throughout. The problem is that Higher doesn't give you much to be excited about.

Some of the problem comes from the soloists. Too many of the solos are merely competent. But I think the background vocals are the main culprit. On From the Ground Up, the straightforward arrangements had a charming appeal. Harmonic Motion has wisely held on to what made them special. They're still trying to produce a clean and simple sound like they did on their debut. In a way, they've gotten better at it. Higher is a tighter, more polished album. But they don't attack the material the same way they used too. I liked the way From the Ground Up was so laid back. But Higher is too laid-back. The energy levels are too low. Some of the songs end up being dull. Their performance sucks the life out of Guster's Two Points For Honesty. The Barenaked Ladies' Call and Answer fares better — the lone woman echoing the lead vocals at the beginning reminds me of what charmed me about their debut recording — but ultimately it lacks the energy it needs to really work. The solo is okay, but hardly grabbing or impassioned the way Steven Page was. The arrangement sort of builds to a big finish, but it doesn't really crescendo. Considering that the original song gets its juice out of big harmonies, it's rather disappointing to hear an a cappella version drop the ball the way this one does.

But I'm still holding out hope for Harmonic Motion's next disc. A lot of the problems could have been fixed by a producer in the studio. It wouldn't have taken any fancy work on the mixing board (because that is not the sort of thing that gives the group its potential). They just needed somebody to yell at the soloist to really bust a gut, to sing it like they really mean it. They needed somebody to tell the group as a whole to attack the backing vocals a little harder. On From the Ground Up, the simple arrangements were appealing because the performances were so blunt — if you're going to be singing a lot of "bums", then you might as well run with it — but on Higher, all the "bums" just sit in the corner of the arrangements like wallflowers. I think that a little bit more energy will go a long way.

There are some songs here that are okay. But that's all they are. Where as half of From the Ground Up was good, Higher is only halfway good.

Specific criticisms:
Mellow energy makes occasionally droopy intonation a bit more painful than it might ordinarily be. Dynamics are too often an afterthought. Soloists are, with few exceptions, lackluster. There are no noticeable bombs, but neither was I drawn into any of the performances.

Specific compliments:
Vocal percussion is extremely solid throughout. St. Teresa is helped by a strong performance by soloist Lauren Hynek, while Nightswimming's unique dramatic demands are nicely matched to Gabe Shapiro's solo. Production is both tasteful and consistent throughout the CD.

Pet peeve of the day:
Crediting only first names. If you have a band of four, then I guess it's ok to say, "Paul on lead, Ringo on drums". We know who you mean. But with 25 members, it's a little annoying to have to cross-reference the master list. It also makes the CD appear a little more geared to insiders who already know all the members. Admittedly, that may be the CD's intended audience. There's nothing wrong with a Yearbook CD (term coined by Freddie Feldman to denote a recording whose primary purpose is capturing a group before the members graduate and go their separate ways). But it has a bit more relevance to friends and family than to the general listening public.

As always, criticisms are based on a comparison with the wide world of a cappella recordings, and there are some extraordinary recordings floating around out there. While this CD may rank as average, it's still a pretty impressive release for a group that did not even exist in 1995! Congrats on the good work.

Higher is better than most collegiate releases, including the group's own previous album. Harmonic Motion has put together an excellent selection of songs, on the shorter side and thus on the side of quality, as well.

The songs themselves are for the most part complex, and interestingly so. At times execution can unfortunately suffer from an approach still in some senses amateurish, or at least just young. This problem is most evident in some solos, which are nasal and undeveloped, but present as well in the backing vowels. The overall effect, combining complexity with simple mistakes, is indeed "higher", but not superlative.

Amidst the consistently good, there are standouts. Tonight and the Rest of My Life offers lush backing beneath a compelling female lead not oversung; St. Teresa is unyieldingly articulated across interlocking and interesting parts; the percussion is fairly tight throughout. By the same token, there are moments when less than "higher" standards prevail: the strangely prim and sexless pronunciation, in both lead and backing, on Eagle Eye Cherry's Save Tonight; sopranos unable to match tone or quality with the rest of the group; and another Barenaked Ladies cover which only goes to prove the eternal rule — you can't cover BNL a cappella with any success.

Despite all this, Harmonic Motion has done a great job and seem aware of their limitations. Perhaps the next album will be called "Highest".