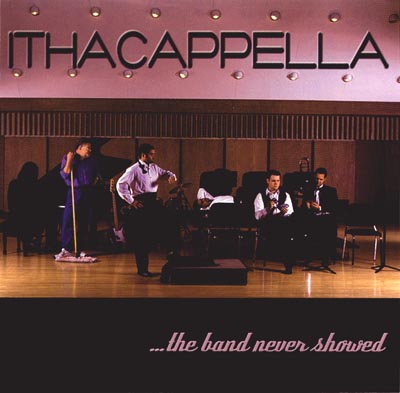 The Ithaca College Men's Chorus (sometimes known, apparently, as Ithacappella) has put together an album that contains an unseemly mixture of glee-club-style arrangements and stiff, awkwardly performed pop cover tunes. While I don't doubt that these guys put all their hearts and time into what they do, I still think they have a lot of work to do before putting out another recording.

The album starts out with a couple of men's-choir-y arrangements that don't sound so bad. Their intonation and rhythm are okay. There's even a moment in Song for the Asking where they sing this very quick line and they're all very much together rhythmically (sounds like they practiced this one a lot). After the first few songs, all accuracy and intonation seem to go out the window.

The soloists tend to have an awkward crack or several flat notes in each song, and the flawed takes still ended up on the album. I know sometimes you're under a time or budget constraint and some corners have to be cut. Please don't cut them with your solos. Most of the time, it's the only thing the listener is actually listening to. The soloist on Seven Days was pretty good; his style fit the song.

When it comes to choosing a key for a song, you don't HAVE to choose the highest possible note a soloist can sing just because he can HIT the highest note. St. Elmo's Fire was way too high for anyone to sing. While it is amazing that Mr. Morris hits a high E-flat at one point, all of those notes above high-C were painful to listen to. I can only imagine, and cringe at, what his face looked like while he sang this song. Drop it down a few keys. It will still sound cool and won't hurt the listeners.

One last thing: please leave off the hidden tracks. The first unlisted track is a live recording of Runaround Sue. Why was this track not listed on the album? It doesn't sound any better or worse than the other tracks. Let it fulfill its musical destiny and list it on the album. The second unlisted track was a montage of random studio tomfoolery. I found none of it to be humorous in any way, but it was nicely produced. They crossfaded and overlaid different takes, and it had a very Revolution #9 feel to it.

Overall, not the strongest album. Ithacappella's first recording was definitely a yearbook album if I've ever heard one.

The key word for this, their first album since the group's founding in 1996, is variety. Indeed, their web site talks about "contrasts of style" as one of the group's trademarks, and so alongside "traditional choral literature" we find a smattering of barbershop, some pop songs, and a TV theme.

And somehow Ithacappella makes it work, due in no small part to the group's ability to shift singing styles, moving from the traditional, rich collegiate blend of their own Ithaca Forever to the lofty chords of Ave Maria, to the straight, unadorned back-up tones demanded by such pop requisites as Crash Into Me and River of Dreams. And who's that fantastic falsetto on Touch of Your Hand? Sometimes they're slightly off (I would have preferred less vibrato on Danny Boy), but for the most part their uncredited musical director leads them well.

But while the singing shines, the songs themselves can sometimes suffer from over-exposure. Ithacappella dares to take on Behold Man and makes it work, but did they have to do Greatest American Hero, a song matched only by Schoolhouse Rock for sheer over-exposure in the pop-culture cliché department? The oddly inspired choice of Sting's Seven Days doesn't make up for subjecting us to Brown Eyed Girl again, not to mention the Boy Band Medley, which may have been good for a laugh at a show, but only serves here to show how difficult those boy band harmonies really are. Ultimately, Ithacappella has managed the peculiar feat of producing an album with a lot of variety and no originality.

Ithacappella has the singing part down pat. Get some fantastic numbers in there and the next album will be really worth buying.

...The Band Never Showed is the debut album of the 18-member Ithaca College Men's Chorus, also known as Ithacappella. It is a fairly standard mix of traditional choir pieces and contemporary songs.

This is an average album all-around. The soloists are decent, for the most part. A few guys lost control of their voices on higher notes or crazy runs and were not successful. The vocal percussion is rudimentary at best, and the album, to its detriment, feels free of recording studio magic.

The arrangements worked best with traditional songs like Ave Maria, and failed on the more contemporary ones like Crash Into Me. Their best arrangement and song was a cover of The Nylons' Touch of Your Hand.

Though collegiate a cappella is trending towards heavy production, there is nothing wrong with a group sticking to the traditional sounds of "pure" a cappella. In either case, a skilled recording engineer can do a lot to reduce group flaws.

With all things taken into consideration, it is an accomplishment for any college group to put out an album. So congratulations to Ithacappella on their first recording — it is always the hardest one.

Ithacappella
JJ Whalen Center of Music
Ithaca College
Ithaca, NY 14850
The group may be contacted by email at ICMC@ic3.ithaca.edu.
×