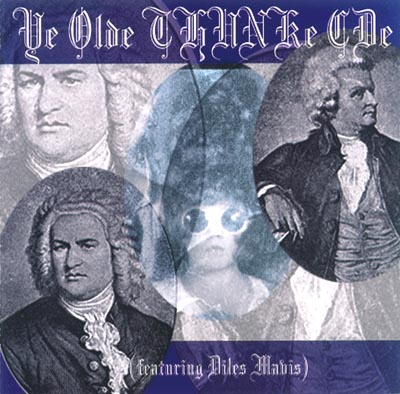 Admittedly, the Thunkers would have made a pretty decent mixed a cappella group about ten years ago, before more sophisticated arrangements, realistic VP, and better engineers/producers became the norm in collegiate a cappella. Actually, the last of these three deserves the most criticism. There are eight men in the group, but aside from their occasional solos, you'd be hard-pressed to hear them. So treble-heavy is the bulk of the mix that the guys should feel cheated by their engineer/producer. Similarly, soloists, particularly in the louder passages, are blended so far back into the mix that they become indistinguishable from the background vocals.

As for the VP, it's just not up to par. I understand that many groups feel the need to include VP as a means to create additional excitement, but for my money, bad VP just draws attention to itself. To be fair, the VP on this CD has to work pretty hard to draw attention, as it too (like the men) is almost always mixed into oblivion. But frankly, in this case, I was not terribly disappointed. The rhythms are frequently ahead of or behind the beat, and the drum sound replication — specifically the noticeable absence of a good kick drum — is severely lacking.

Which leaves the arrangements. They're not bad, by any means, but some self-restraint would serve the arrangers in good stead. There is a disturbing tendency toward extreme highs in the sopranos which most often translates into shrillness (and a headache). Further, a predilection for either far too sparse backgrounds or overly complex syllable combinations/voice layerings makes for an alternatingly empty or mushy sound. Granted, it's a fine line between "textured" and "busy" but it needs to be walked a bit better than it is here.

Lest you think that I hated this album, I didn't. But I also didn't make it past two minutes into any given song without wondering when it would be over and what song was next. Simply put, Melodious Thunk is a group of quite good singers who need polish — in arrangements, in performance, and especially in the studio. So for now, avoid Thunk and stick with Monk.

Take seventeen college students. Endow each one with spirit, energy, and oodles of vocal talent. Put them together in a studio, and what do you get?

In the case of Ye Olde THUNKe CDe, not nearly as much as you'd expect. When the members of Northwestern's Melodious Thunk grab the solo mike, they show off power, range, clarity, creativity, finesse ... everything you could ask of a collegiate soloist. Individually, they're great. But this group is less than the sum of its parts.

Nearly every song is a variation on the same formula: a solid (Policy of Truth) or spectacular (Say My Name) solo failing to hide the clumsy fundamentals underneath. Kathryn Skemp, Sabrina Scherff, and the luscious Willis White, in particular, deserve better support than this. There's no excuse for the disunity among the women on This Woman's Work, the shoddy tuning on Waiting in Vain, or the flaccid VP throughout.

The arrangements have room for improvement, too. Distracting syllable choices (Save Tonight) and ill-conceived experiments (Time After Time) compound the tuning and rhythm problems. The producers' inadequate efforts do little to help the situation. A bass has to breathe, but if he's alone on a held note, as in the Streets of Philadelphia intro, I don't want to hear him do it. A live-sounding mix is no reason to neglect the basics.

Maybe the problem lies with the priorities of the director. Maybe it's the ears of the personnel. All I can say for sure is that the vocalists in this group ought to be able to come together better than this. Melodious Thunk is like a basketball squad packed with slam-dunk specialists who can't make free throws. My advice to the group is to drill those fundamentals in practice. Hold chords for two minutes at a time and tweak them till they're perfect. Isolate challenging intervals and work them over and over. Practice with a metronome.

Most college groups would give up a year's road trips to find just one freshman with the vocal talent Melodious Thunk takes for granted. If they can find a way to transform themselves from an assemblage into an ensemble, there's no limit to how far they could go.

Listening to Ye Olde THUNKe CDe is like watching a baseball game. There are a few interesting moments, but there's a whole lot of stuff that leaves me twiddling my thumbs, or searching for someone with beer and peanuts. The CD begins promisingly, with good energy in the verses of Sgt. Pepper's, and then the chorus hits. It's polite, very "doombada", and I'm wondering where the peanut guy is. They transition nicely into With a Little Help From My Friends, but it stays rather simple and uninteresting.

Now, don't get me wrong... simple can work VERY well. But for me to get into simple, I want the chords tight, tuned, and round. I want the sound to be so good that I don't itch for something else to grab my attention. And in this case, Melodius Thunk's sound just isn't THAT good. The tuning's sometimes on, sometimes off. The rhythms, attacks, and vowels aren't as tight and together as I'd like to hear them. The overall sound of their recording is just as troublesome. The thin sound makes it seem like they're on one side of a large room and their microphones are on the other.

Like a baseball game, there are highlights and errors. OK, I realize that those are not unique to baseball games, but I'm just trying to extend the analogy here. Let's start with the errors, and let's start with the liner notes. The liner doesn't credit any of the original artists of the songs, and that's a big pet peeve of mine. The percussionists aren't credited either, and everything's just hard to read. Philadelphia and Time After Time also fall in the "errors" category. Both mar the CD with poor tuning and odd mixing. I think Time After Time may be sung by just the women of the group, but at one point it sounds like there's another part that might be tenors under there somewhere. Whatever it is, it's mixed so low I can barely hear it.

But let's not linger on the errors when we can move onto the highlights. And let's start with Willis White. Some of the best arrangements on the CD were penned by him (Young and Proud, Say My Name, My Love is Your Love), and his solo on My Love is Your Love is the one male solo on the disc that sounds really solid. It's a thoughtful, soulful, independent take on the song, and it sounds great. Thunk's web page shows that he directed the group the year after they finished recording this disc, and I'm hoping their next recording reflects a positive influence from him. Most of the women solo really well. Kathryn Skemp sounds wonderful on Witness, and when the women join her in harmony, it's magic. The segue from Die Without You to Stay is clever, original, and smoothly performed. Major snaps for that.

Living in Boston during Red Sox season might get me clubbed for saying this, but baseball just isn't really a sport I enjoy all that much. I want more activity, more to grab onto and dig into. Unfortunately, I don't find it here. Thunk shows a lot of promise, but I'd pass on this one, and check out their next release.