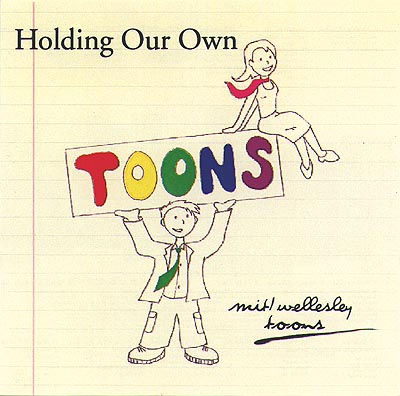 The track that shines above the rest is Jackson Cannery. This is, dare I say it, a BOCA-worthy track. Don't be surprised if this one sneaks onto BOCA 2002 on the basis of its strong lead, columns of energy, and just overwhelming fun. Other outstanding tracks worthy of mention include You're a God, Strangers Like Me, and Angels Would Fall.

Let's talk a little about soloists. I'm going to let the men slide this time and focus on the women in the group. The women soloists in The Toons are an extremely talented group of young women. I don't know if I've heard many other mixed collegiate groups that can boast this many strong female voices. Unfortunately, though, none of them have developed a mature woman's voice on lead in any of their songs.

Because of the lack of maturity in their voices, songs that were originally sung by American pop divas come across weak and unexciting on this project. Cecilia Lam on Mariah Carey's '90s love song, I'll Be There For You ... nice try, but no. Sawaka Kawashima on Vanessa Williams' Colors of the Wind ... thank you, drive through. And finally, Brooke Bryant's lead on Angels Will Fall, a Melissa Ethridge cover ... great sound and control, but the constant pronunciation of /An_julls/ instead of /An_gels/, though a matter of personal preference, drove me up a wall.

Mechanically, this album is pretty solid with good production holding up the backbone of the project. In a few instances, the bass voice could've been boosted to give more of a bottom, but for the most part I had no level issues or spectrum issues with the project. Tuning, though spotty in Lullabye (Goodnight My Angel), was solid throughout the rest of the album.

The vocal percussion was solid, though not very advanced or impressive. I once thought that dynamics were extinct in college a cappella, but they're used effectively over the entire album. Kudos!!

The future looks good for The Toons. They just need to let loose a little and shake all of their anxiety and stress out of their music. The weaker tracks will become stronger, and the whole of the album will equal the sum of its parts.

I am mad at the MIT/Wellesley Toons. (Not really guys, promise!) In their opening number, crazy vibrato and horrid blend make me dread listening to the album. Then the beginning of Circle of Life blows me away. It is beautiful and practically gives me chills. The high tenor's "mazembwenya" and the smooth blend of the background are gorgeous. But The Toons do it to me again when the rest of the group joins in. Pitch issues and blend bring the song down from the heavens.

The rest of the album stays on this plateau of average until track #14, Video Killed the Radio Star. Out of nowhere come energy, excitement, a fantastic arrangement, a gorgeous soprano part, a dead-on solo and great production. Then track #16, How Deep is Your Love, also pops out of the average and into the beautiful. The soloist is great. Why wasn't he used more often?

The Toons' strengths are surprisingly their sopranos and basses — the singers most difficult to come by. It is in their middle range that the background gets muddled, and this is partly due to the arrangements. The Toons should try to make sure the middle parts don't conflict too much in words or vowel sounds.

I would also suggest that they be more picky and exacting in recording and spend more time in production. The tracks I have mentioned were the only ones where I heard signs of producing. I suggest focusing on quality over quantity, to use a cliché.

This is an average album from a group that could easily be great, if tracks #14 and #16 and the beginning of #2 are any indication.

The MIT and Wellesley Toons have produced a very listenable album, Holding Our Own. The song selection spans at least three decades and gives this group of singers a chance to play with a lot of song styles.

I have enjoyed playing the CD when I wasn't really concentrating on the technical aspects of their musical effort — at times when I needed something pleasant to fill my space.

However, if you are like me, you cannot allow music just to sit in the background. I need to analyze it. What I found is that this CD has one major flaw: almost every song has a portion where the lead or background singers are flat. Enough said.

Two songs that stand out above the rest are Mexico and How Deep is Your Love. In both songs, The Toons used all the musical devices that they needed to create music that's fun to listen to. Mexico opens with a very interesting syncopated rhythm. The song uses good vocal percussion to add both a good drive and a rhythm that are appropriate to the song. The soloist adds musical energy and the results are wonderful.

On The Bee Gees' classic How Deep Is Your Love, The Toons followed the form and arrangement of the originators. The background singers and vocal percussion gave the lead a solid, swinging foundation. The lead, who has very colorful voice, uses this background to create several minutes of listening enjoyment.

Cut 13, Billy Joel's very pretty Lullabye (Goodnight, My Angel), is representative of this group's problems. The lead does not support his tone. A lady in the background continually sings flat. The vowel sounds don't match across the group. This is a gorgeous song, but the value of the music that they produce does not overcome the problems.

Back to the positive: there is a high soprano in this group who is extraordinary. She sings at the top of the vocal range with ease. The people running the production and mixing equipment were able to capture her voice and place it in the songs in such a way that it was not overwhelming. Listen to cuts 11 and 14. She's there in the background. Gorgeous.

Despite its problems, Holding Our Own is OK as background music. I enjoyed it, as long as I wasn't really listening.