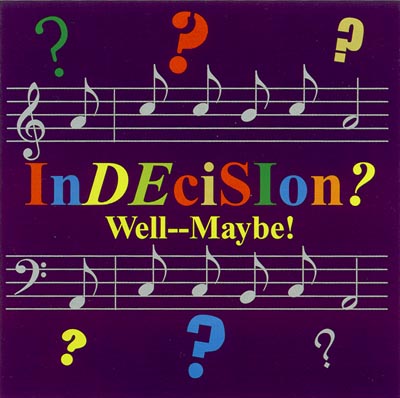 This is one of the few albums that I've reviewed for RARB over the past two years that does absolutely nothing for me. Not one "warm and fuzzy" moment on the album, not one quick-reach-for-the-stereo to hear that track again...not one redeeming quality, just a handful of shoulda-woulda-couldas.

As far as quartets go, these guys are middle of the road at best. They have no dynamic contrast in their songs, little creativity in their arrangements, and absolutely no power or energy behind their music. Their liner notes say that they placed first at the 2001 South East Regional Harmony Sweepstakes competition, and 1st runner-up at the Mid-Atlantic Regional. Taking that into consideration, I'll attribute this poor effort to the fact that this is their first recording.

Maybe they captivate the audience at shows. Maybe they take over the stage and make it their own. I'm sure they have many qualities that make them a solid group, but these qualities don't show up anywhere on this project. Four guys standing around a microphone singing isn't a recording...it's drunken karaoke.

I'm probably being way to harsh on these guys. They look like nice guys, they sing good music, and actually, their bass Bill Hickman is pretty solid. I like his sound in tracks like Java Jive and The Band Played On. They sing together well in a "friendship" sense, and you can tell they enjoy their music.

Tightening the blend, tuning better, producing vocal energy, and writing creative arrangements would make a world of difference for InDEciSIon if they decide to record another album someday. Basically, put your whole heart into the next one, not just a small piece of it.

Given that InDEciSIon took Audience Favorite at the 2001 South East Regional Harmony Sweepstakes, I'm betting that this group's charisma makes their live shows a hoot. If so, this disc doesn't do them justice.

InDEciSIon has chosen to spin their CD as a little tour of SPEBSQSA eras and styles, complete with Mr.-Rogers-esque expositions preceding each number. This theme does a little bit to justify inclusion of some of the most overdone a cappella songs of all time (Java Jive; In the Still of the Night; Let's Get Away From It All). A little bit. But if InDEciSIon wants to cover such familiar material, they should find some way to make it their own. Here, they fail to either do anything creative with the arrangements or distinguish themselves through technical perfection.

Some tracks are charming, especially the lead-off tune. However, recorded barbershop is kind of pointless if your chords don't ring, and numerous tuning flaws pop up throughout the disc. The bare, live-sounding production doesn't help the situation much. The high range sounds distant and thin on Moonglow, and I'm going to take the charitable view that In the Still of the Night was just a bad take that should have been left in the studio.

As recorded here, InDEciSIon sounds like a decent amateur quartet, but the disc doesn't stand out from the crowd.

InDEciSIon is a barbershop quartet from the Atlanta, Georgia area (Marietta, to be a little more exact). They are all members of the Dixie District's current leading chorus, The Big Chicken Chorus.

Well — Maybe! is a collection of standards that anyone over 40 should recognize. They are arranged by some of the best arrangers that the barbershop world has to offer. The tunes come from many genres.

The collection has some nice singing. I particularly like their results on tunes that stay close to a form similar to barbershop. In the Still of the Night, The Band Played On, and Bluegrass Gospel Medley are probably the best cuts on the CD.

Where InDEciSIon did not fare so well were tunes that required a chord tuning that barbershop quartet training does not teach. Close harmonies out of the circle of fifths and chromatic melodic phrases were two of the most obvious places where they were likely to stumble. Usually the later caused some degree of tuning inaccuracies that left the listener wondering what was wrong.

One other interesting aspect of the CD was that many of the songs have a spoken introduction. Although the speaker has a very nice, resonant voice, it distracted me from listening to the tunes. I like to listen to my music focusing on the music. After each piece finished, suddenly the voice appeared in my listening space telling me about the next tune. After listening to Well — Maybe! many times, I never became comfortable having a recorded emcee talking to me. You may be different, but it affected my repeat-listenability score.

As I said, at times this foursome demonstrated that they can sing. I'm definitely going to try to hear them in person, where an emcee counts. Would I buy their CD? Well...maybe.

Available from InDEciSIon and Mainely A Cappella.