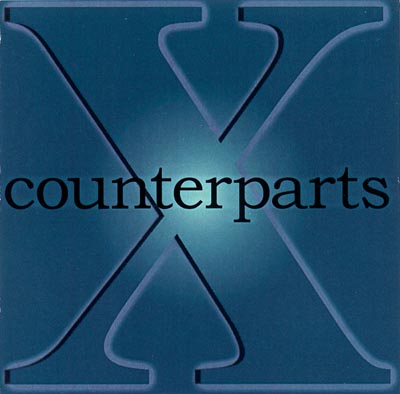 The Counterparts' tenth album should have been a benchmark for the group. They even named it Ten. But instead of being a high point for the group, it's a letdown. The Counterparts were on to something with their album Afterglow. Where did they go wrong this time?

Their biggest problem is the soloists. The soloists are strong across the board. Many of them show impressive range: basses sing songs that would normally go to tenors, and some sopranos could easily pass as tenors. I particularly like David Caldwell, who on Sex Bomb shows that he has enough swagger to pull off a song with that title. Unfortunately, some of the soloists are getting lost in the mix. It's not the performances, it's the engineering. For example, on Beautiful Day, Matthew O'Dowd's solo sounds secondary to the backing vocals.

Speaking of Beautiful Day, the other problem with Ten is the track sequence. The album opens with Beautiful Day, which is hardly one of the better cuts. They should have opened with Cold Beer and Remote Control or Ain't No Sunshine, both of which have well-constructed arrangements. The album ends on a cover of Enya's Orinoco Flow. The Counterparts' version isn't lush enough or richly produced enough to work. And it certainly isn't exciting enough to close the album. That prize spot should have gone to Waiting in Vain, which builds to a nice finish.

Some of the songs on the disc aren't mixed to show off The Counterparts' best qualities. The track sequencing keeps the album from being a dramatic and cohesive experience. When you add those two problems together, the result is a disc that fails to engage or excite, despite its strengths.

I've listened to the Counterparts a lot over the past few years. They've tended toward well-blended a cappella, influenced by jazz. While that tendency seems still in evidence, their latest offering, Ten, also includes more in the way of experimentation in other genres. And with few exceptions, the outlook is generally good.

Nowhere is this more evident than in the opening track, a high-energy take on U2's Beautiful Day. The 'Parts mix a solid lead, smooth backing and crisp percussion to exciting effect.

Elsewhere, the group is less effective. Some arrangements, while admirably complex, leave voice parts stranded, singing (as it were) against the grain. An example is the female lead-in to Throwing It All Away, which only conflicts with the soloist when he begins. The same is true of Cold Beer and Remote Control — the backing vocals employ syllables which can mask or obscure the lead.

A more serious problem is the bass line, thin, mostly naked and sometimes disturbingly so (Ain't No Sunshine). The bass hasn't got much bottom, and as a consequence its wanderings seem aimless for lack of oomph. Less walking and more continuous lines would help here (as would less attempts at having the bass line fill in for both bass and kick drum). All of this leads to less-than-perfect blend.

This is made worse by the complete lack of agreement between bass and percussion. While the two employ the same rhythm, they seem often to belong to different songs in terms of tone — dramatic percussion is paired with limp walking bass, and round, pervasive bass is paired with unexpressive percussion. These things have got to be ironed out; they bring down many a song.

Finally, these problems can be compounded by vocalists not matching vowels. Especially in the sopranos, on repeated lines vowels tend to slip away from each other. This problem and the others are best represented by the final track, a song so badly done as to be simply unbelievable. Percussion and bass are the straw that breaks Orinoco's back, but this poor anemic camel had nothing much to recommend him in the first place.

In all, though, the group can do well. So well, in fact, that I wish upon them, for the future, better studio work. The group itself is top-heavy, but the recording sounds tinny, especially on those tracks involving more homophony...thin, thin, thin, with nothing downstairs. A lot of good voices are represented here, but the combination isn't always as interesting as it could have been.

All in all, a decent album from a better-than-decent group.

I have enjoyed the University of Pennsylvania Counterparts for several years through their many BOCA appearances (I've Got a Right in 1994, One of Us in 1998, and I Can't Make You Love Me in 1999). Their creatively named (I'm smiling here) tenth album, Ten, fulfills, disappoints, exceeds and frustrates my expectations.

This is a good album that could have so easily been great. The arrangements are stellar, and I challenge you to find another album with such a high quality of arranging across the board. There is a wonderful jazz influence on the arrangements that imparts lush chords, syncopations and intricacy without falling into the pop a cappella trap of clashing vowel sounds and over-complexity that just sound busy.

Two of the soloists stand out to me as fantastic. I can't believe that Mr. Russ Dickhart is singing bass. He has beautiful falsetto on Throwing It All Away and especially Coldplay's Shiver. Crystal Chukwuma's sultry alto voice adds some nice soul to the group on Waiting in Vain. Overall, the solos were quite nice.

The tuning problems aren't as obvious as I sit listening to the album from my laptop's CD player. But on my stereo with speakers, pitch issues are painfully obvious in songs like Hotel California and Limp. There also issues through the other songs that detract from the listening experience. There was also a bit of harshness in some of the female soloists that could have been toned down with a bit of reverb. In the background as well, the sopranos should have been lowered in the mix.

Regardless of the problems, this is still an enjoyable album.