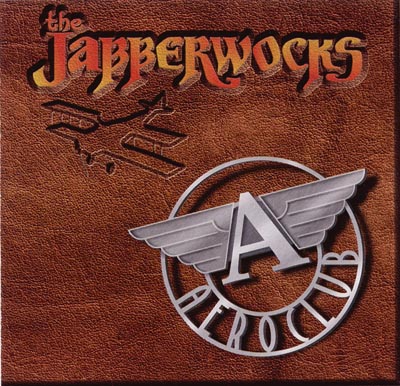 Generic new album from the Jabberwocks. No real standout soloists or ace tracks, but no reason to run screaming either. Nice men's group, that's all — me, I'd go to the live show and skip the CD unless I were friends with one of the soloists.

Janie's Got a Gun is technically the best track on the album, and it is artistically mystifying. I have a lot of respect for the many difficult tricks this cut pulls off — convincing glam rock solo, nicely focused power chords and some interesting contrasts in the arrangement. Non-English speakers would be impressed. As a concept piece, though, I don't get it. This song is all about story, and what the heck does Love in an Elevator have to do with the story? The first, music-only reference was cool, but as the song built and the references started to have words, it completely lost me. Yes, it's another Aerosmith hit from the same era, and yes, it's kind of neat where they overlap musically. Not neat enough to make up for the surreal clash of themes, however.

Also, "Janie got a gun"? Even Steven Tyler enunciates the possessive, and the Jabberwocks' steadfast refusal to sing "Janie's" really got on my nerves.

Some of my favorite cuts on this album won me over for their boyish charm and cheerful appeal. Nick Collins is a sweet-natured Kermit the Frog in Rainbow Connection, while Me and the Boys has the cleancut energy of a high school band of buddies. The two soloists of No Diggity have a boyish quaver that mostly stays on the appealing side of shy, instead of crossing over into the dangerous territory of warbling.

I also liked the sing-along section of Cheeseburger in Paradise. The song overall is kind of muddy, like they stopped in Margaritaville for a quick one on their way to the studio. But hey, Jimmy Buffet is supposed to be fun. Maybe after that live show, we can all go out for a reprise.

The first three songs on an album tend to shape your impression of the entire disc. On The Jabberwocks' new CD Aeroclub, track one is solid but sleepy. Track two doesn't rock enough (even through the soloist gives it his all), and it only makes you miss the original recording. Track three is brave, but awkward and forced. Unfortunately, that pretty much sums up most of the album: solid at best, unexciting at worst.

There are some exceptions. Cheeseburger in Paradise may have some tuning problems, but it has a winning energy. The Jabberwocks' approach to the song is reckless, and I wouldn't want it any other way. James Rich rips into the solo and doesn't let go. It's fun, which is just what a song with "cheeseburger" in the title should be. It reminds me of how much fun some of the tracks on their last album were.

Once again, the Jabberwocks sing The Nylons' song Me and the Boys. This recording of the song may be their best one yet. The performance is straightforward and all of the soloists command your attention. I wish I could say the same about Cupid. Not that Cupid is bad. Their performance is almost really damn great. It's got a nice breathy sound and it's grounded in a rock solid base. But when the backing vocalists sing the lyrics, they blend into the background too much. There are times when it would have been nice to hear the lyrics be more accentuated. Still, Cupid is one of the highlights of the album.

The album ends with an absolutely horrible track. It's 7 minutes and 28 seconds long. It starts off with a live version of their Farewell Song, and we all know how fun traditional college songs are. After that it jumps to a muffled live recording of It Ain't Over 'Til It's Over, a song that already appears on the album (in a properly recorded studio version). Then, for reasons I'll never comprehend, they end with a visual joke. There's a boom, and somebody screams like a wild man, and some people in the audience laugh. Why is the audience laughing? Hell if I know. Why are the Jabberwocks screaming into my ears? That's a mystery too. Thank goodness the live recording is so faint, or I'd be deaf.

I saw The Jabberwocks perform recently. During their rendition of No Diggity, a friend leaned over to me and said, "It takes a special kind of group to be happy with just one chord." No diggity.

Obviously this group doesn't sit on one chord for the entire disc. No Diggity even has another chord which pops up a few times. But intra-song sameness drags this disc down. Beyond the first track, many tunes (most notably One Week, Fee, and Cheeseburger in Paradise) are skippable once you get past the first verse and chorus. And I can't just blame the original authors of the songs — No Diggity actually stays more interesting than most of its repetitive pals by the strong performances of the soloists and small touches sprinkled throughout the track. The Jabberwocks' arrangement of Fee actually cuts out the piano interludes between choruses and verses, which provide the bulk of the variety in the original Phish song. Janie's Got a Gun, on the other hand, changes, grows, moves, and engages this listener far more as a result.

I'd like to see these guys work on developing interest and energy throughout songs that can otherwise stagnate, because their performances on this disc are fairly strong. Their tuning and tone are pretty good, their percussion rarely detracts and frequently adds, and their soloists turn out solid performances most of the time. Sean Kumar, specifically, nails the solos of No Diggity and the butter-smooth Cupid, and Graham Norwood performs some impressive acrobatics on Lenny Kravitz's It Ain't Over 'Til It's Over, although he will surely gain more control in tricky spots with time.

Lastly, I must harp on one more thing. Unfortunately, a Kermit-impersonating soloist mars Rainbow Connection. Not that his performance is bad, and the background is quite sweet. But Kermit's unpolished sincerity is what made the original such a gem. Mimicking his voice only serves to remove the song's most endearing message, replacing it with a novelty impersonation that grates after a few moments.

It's not going to blow anyone away, but Aeroclub is a solid effort, quite worthy of pride. Play on.