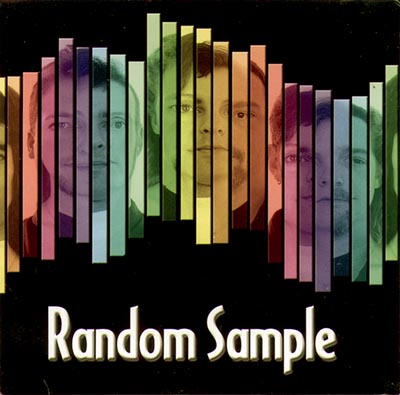 Random Sample is more or less just that: a sampling of songs from Random Association. It's an open question whether the group's name inspired the album title, or whether the selection really is random, representative of the group's work as a whole. In either case, there's not much to work with here; although better than their previous recording, Random Sample suffers from some of the same problems in tuning, blend, and tone.

Smooth is well-intentioned and executed with energy, but ultimately cringe-worthy. Despite his best efforts, the soloist comes across as too straight-laced for most of the lyrics. Backing vocals are interestingly arranged but, again, too classically-voweled to make this song really work.

Just Desserts is better, winning an extra kudos as an original. The group gets to show its flair for jazz, and overall seems most comfortable here.

You Win — in my book, an unfortunate choice for any group: the singers make a good show of it, but cannot save the song from its labored lyrics and melody.

Come Together is well-done, perhaps the best of the bunch, with the best use of engineering to allocate volume and reverb to different parts. The arrangement steers clear of especially low notes which might have given the chorus extra oomph, and inevitably invites comparison with The Real Group's rendition. Generally good.

All in all (and that's not a lot), Random Sample offers a scattershot image of a sincere, hard-working group, some of whose musical choices may simply not be suited to them.

RA's self-titled debut was the first disc I tackled as a RARB reviewer. When Random Sample, a four-song EP, arrived, I was eager to see how (or whether) our input would affect their output.

Unfortunately, the group has managed to fit as broad a mix of highlights and lowlights into an EP as it did into an 11-track album. Just Desserts is a fine, if wordy, original, and the group has improved its cover of Come Together since its last visit to the studio. But I can't imagine what possessed the group to open the disc with a painful version of Smooth, co-starring a sour block and a soloist who waded way too far into risky waters.

RA has replaced its entire lineup of female voices since recording its previous disc, and if the soloist on the beautiful and moving You Win is any indication, valuable additions they are. I wish the more stiff and tentative men of the group (heard on Come Together and the regrettable Smooth) would learn from their example.

Random Association is equal to most of the material on this CD. Solos were one highlight; there were some very good solo sections. I found Come Together, which featured multiple soloists, to be the best demonstration of the group's solo abilities.

At the same time, the production of the CD presented problems. For example, on the same cut there is one point where the solo was shared by two men. Their general volume levels should have been approximately equal. However, one soloist was obviously louder. On anther cut, there was an imbalance between the soloist and the background singers. This problem is easily fixable.

There were times when both the soloists and background singers went flat. It sounded to me like the singers were capable of singing on pitch, but for whatever reason, they weren't where they needed to be. Fixable.

The other area that could use some work is energy. Singers and groups often find this to be the hardest concept to implement. It is, in fact, what makes music music. From rock to opera to a cappella to rap to whatever your favorite might be, accomplished musicians take the notes and words on the page and do something with them. Random Association didn't have the energy I was listening for. Fixable? It's up to them.

I wish this group the best of luck. Work hard; you will be pleased with the results.

CDs may be ordered online for $6.50 from Random Association or through Mainely A Cappella.