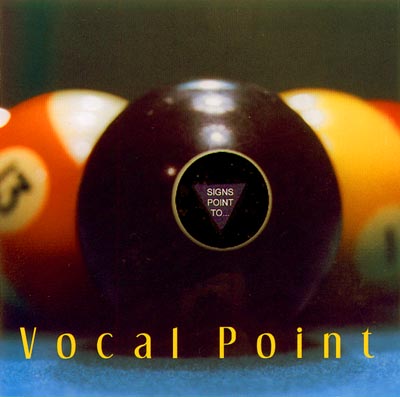 A lot of good things add up to a great album for Vocal Point. The new album is wide-ranging and well-handled, with a few fabulous moments scattered throughout. The group rarely seems in over its head, despite a repertoire that starts with Motown and ends up with No Doubt. The compulsory figures are acquitted respectably — Freedom; Linger; the Dixie Chicks song du jour — and the rest of the songs are familiar without feeling hackneyed.

I was floored by this group's arrangement of Straight Up, which to my mind stands up to any that were done last year. Guest arranger JJ Moscato adds some groove and some soul to Paula Abdul's original ditty, which to me was the musical equivalent of making a silk purse out of pig ears. Bathwater was another favorite; although it was not as seamlessly handled as some tunes on the disc, I liked the bite that it brought to an otherwise mellow album.

Kristen Jenkins is the other highlight of this disc, with no disrespect intended to any of the other soloists, including CARA-nominated Samantha Nelson (Ain't Too Proud to Beg), Carla Watson (Evaporated; Straight Up), and Julie Lloyd (At Last). Jenkins stood out as the best of the lot, with her husky, inviting tone and expressive lines. I enjoyed her turn on Drift Away more with each listen, and her lines on Bye Bye Bye were a welcome reprise. Her duet with Lloyd helped the group squeeze the most out of what is essentially a very silly song.

This group has really grown into itself. This album is a benchmark for future incarnations, and I look forward to hearing what they come up with next.

Vocal Point's Signs Point To ... is a shame. While the singers seem talented, their performance here is hindered by two problems, the first of their own creation and the second, more serious one, beyond their control. Taken together, the two problems make Vocal Point's music less than it could be.

First, the group is too ecumenical: too many people are given too many chances to do too many different things. The overall effect is that audible talent is considerably diluted. For example, out of thirteen group members, ten sing solos. Some (Julie Lloyd, Samantha Nelson, Carla Watson) are substantially better than others (Betsy Angell, Catey Juravich, Beth Manbeck). The same holds true for percussion: if two's company and three's a crowd, one percussionist (Carla Watson?) is cool, while eight is cacophony (the disc's best percussion is supplied by a guest vocal percussionist on Freedom). Finally, the group doesn't have the performing or arranging chops for many of its songs. In general, the more recent or upbeat the song, the worse it sounds, due to lackluster backing vocals (including tired syllables) and to well-meaning but inappropriate soloists: Straight Up, Say My Name, Cherish, Wide Open Spaces, and Bye Bye Bye are all underdone: the arrangements are muddled, the tempos are too slow, and the singers just can't pull them off.

All of this is made worse by the second problem: the recording. A very audible room does nothing to help Vocal Point's sound. Soloists sound even more confined by their tinny reverbs. The bass (often a single voice) is overmiked and somehow blunted or dulled. Percussion is hidden (why have it if not to hear it?). The poor recording makes the whole disc just that: a poor recording.

All in all, Signs Point To ... indicates that Vocal Point is talented, but perhaps too liberally democratic about arranging songs and assigning soloists. This waters down the talent and, combined with poor studio work, makes the disc only average.

Memo to Vocal Point: this was a better CD than Closet Divas. I think you paid attention to many more details in the creation of this product. I would like to think that you examined your results on Divas, learned from it, and moved forward in your musical journey.

On Signs Point to..., you brought in some really wonderful soloists. Just listen to track 5, At Last. Wow, what a lead. Even though there were some other aspects that weren't at their highest, the soloist on the first song, Ain't Too Proud to Beg, is very expressive. On Wide Open Spaces, the soloist has good control, sings with good energy, and attacks the notes with appropriate emphasis.

As an ensemble effort, At Last sparkles. Vocal Point matches the energy of the wonderful soloist and creates really nice music. Even the very high note on the last chord is perfectly in tune.

On Bye Bye Bye, you do it again: you make music. The soloist and the background singers plead with the listener. There is a very nice duet, and the vocal percussion is right where it needs to be. Good work!

Now, you need to think about what you will learn from this CD. Let me suggest that you learn to sing with energy. The most prevalent comment on my review sheet is that the energy is not high enough. Yes, you are singing very nicely, but there is an edge missing. Even on soft, slow passages and songs, energy is important. I can tell that you are not just going through the motions, but you failed to convince me that you as a group really believed what you were singing.

Keep up the good work. Keep letting your soloists do their very best. Keep your focus on singing in tune. But next time, add just a little more oomph.