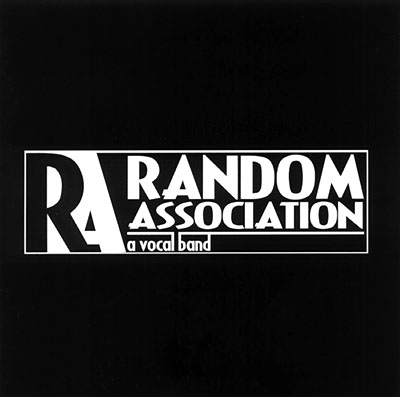 Random Association's debut recording is seriously flawed. And it's not just hurt by little nicks and scrapes here and there. The CD has a problem that cuts through many of the tracks like, well, like a big scratch across a record. That problem is that the soloists are consistently thin and breathy. They are often unable to go the extra mile and really sell a song. That said, it's still a pretty good album that bears up well to repeat listening.

The first thing that makes the album work despite its shortcomings is that they choose some material that lend itself to thin and breathy solos. For example, the opening cut, Sade's Sweetest Taboo works BECAUSE of the understated solo. It fits in well with the cooing tone of the song. Possession doesn't really come together in a satisfying way, but at least it takes advantage of the breathy voices. Where the album falls apart is when it takes a stab at classic rock. They try, but they lack the solid foundation and confident solos they need to make Fly Like an Eagle, Come Together, the funky Brick House, or the soulful Take Me To the River work.

The main thing that makes Random association special is their original songs. Sure, there's only two of them, but they stand out. I'm sick and tired of a cappella originals that sound like cookie cutter top 40. I keep asking myself why these groups can't write song like the songs they themselves like listening too. Then, just as I'm losing hope, along comes Random Association with For You, a song that seems inspired not by dreams of making Casey Casem's countdown, but rather by the proud tradition of singer songwriters. For You, which is written by Meg Chambers, sounds like a Joni Mitchell song, and a damn fine Joni Mitchell song at that. And the delicate solo (again by Chambers) actually works in much the same way her solo of Sweetest Taboo did. It could stand to have a bit more umph behind it, but still, it works.

For You is followed by Learning To Fly (not the Pink Floyd song, although it would probably suit the group). This original by Joe Antonioli is pure '80s fun. Perfect driving music, especially if you're on your way to Blockbuster to rent Better Off Dead. Unfortunately, the performance left me wishing that there was more energy, more drive, and more fun. A bouncy song like this deserves a completely solid and carefree performance.

Originals aside, two of the covers also deserve a shout out. Smells Like Teen Spirit lovingly borrows from the haunting Tori Amos arrangement, so prepare to be surprised. And the often sung (but rarely well-sung) Africa is actually pretty good. They don't have the lead drop out on the chorus and replace him with shrill sopranos (I hate that) and they don't get so wrapped up in silly percussion sounds and Jungle noises that they forget to lay down some nice harmonies (I hate that too). All in all, a very reliable cover of a song most groups ruin.

Random Association scores points for their selection of songs, ranging from '80s pop to soul and rock. What breaks the album for this reviewer are two things: a generally lackluster interpretation of each song, and the production.

Although a variety of song styles are represented, the group's style is fairly uniform throughout. Each type of song is approached in a fairly similar manner, the voices hovering around mezzo-forte with very little in dynamics. The arrangements contribute to this: each uses similar instrumentation (walking bass, mid-range lead and countermelodic/descant soprano work) for similar results. Some bust-out chorus work, strong changes in dynamics or interwoven syllables could spice up this side of things.

It may be that the songs only sound the same, and were actually approached with differences in mind: the recording and production seem to hamper the group's sound. Each track sounds muffled, with the bass in particular receiving too little attention and the higher voices not so much muddy as uninteresting. There is a sort of reverb on the tracks, which strangely takes away from the vitality of the voices and submerges the group in underwater acoustics.

I can't really recommend or condemn this album. Random Association seems like a fine group, trying things for which adults are not normally famous (grunge, rock, vp), but the album itself is flat and uninteresting.

They say you can't judge a book by its cover. So when I found myself chuckling a bit over Random Association's press kit, which states that their repertoire consists of "Jazz, blues, R&B, pop, and original tunes", I tried to suppress my skepticism. What amused me was the image of these seven Caucasian men and women from Vermont in an MTV video performing R&B in the way that we perceive R&B to be today: slick looks, fancy cars, and lots of hand-waving dramatics. It's a funny image, maybe even preposterously so. Oh yeah, sure, they sing R&B. However, once I set aside my prejudices, I found myself enjoying the album very much.

The album consists of crisp production, creative arrangements, and sultry vocals that are, for the most part, believable. The background parts are solid and the arrangements original and creative. The album also features great covers of The Sweetest Taboo and Smells Like Teen Spirit, which I highly recommend for two very different reasons. I liked The Sweetest Taboo because Meg Chambers's performance is so close to Sade's own unbelievably thick and luscious rendition. What a difference when compared to the many collegiate covers I've heard! I think Meg's maturity has helped her in this aspect, because her voice has a depth that 19-year-olds can rarely display. Smells Like Teen Spirit, however is just about as far from the Nirvana original as I can imagine it. Okay, I haven't yet tried imagining it redone as a yodel, but you know what I mean. The song, sung by soprano Jill O'Brien, is so gloomy and lugubrious that it's just makes you want to wallow in it. I love it!

On the other hand, I do have some problems with the album. Overall, the album tends towards the mellow side, where even upbeat songs like Fly Like an Eagle, Take Me To the River, Brick House, and Come Together ended up in the realm of mid-tempo-grooviness rather than in the land of driving rock and roll or funk. The male soloists lack the intensity and flavor that I feel their songs needed (especially in Brick House — where's the funk? Where's the sass? Gimme some more). Finally, while their two originals are standouts on the album, I feel that their album could live without the a cappella cliches: The Sweetest Taboo (incorrectly listed as My Sweetest Taboo), Possession, and Africa need to all be shelved in the dungeons of a cappella hell. Great songs, waaay overdone.

So how did Random Association do on the R&B tip? Well....let's just say I'm not laughing anymore, but their strength definitely lies elsewhere.

This album fell short in many aspects thus making it just another average a cappella project. The energy level of each track on the album was painfully low. Up-tempo songs that should have grooved (e.g. Brick House, Take Me To the River) sounded like they were strapped to a wheelchair and heading for the retirement home. Adding to the lack of energy on this album were the simplistic arrangements and poor solo work. Most of the soloists sang the pitches they were supposed to sing, without consideration of style, feel, or believability. The one exception to poor soloists on the album was Meg Chambers. I love this woman's voice! She has this almost air-like quality to her voice that made her perfect for lead on Possession, For You, and The Sweetest Taboo.

The track list on this album was also sub-par. Only two originals graced this album and all of the covers, with a few exceptions, are songs that have been done over and over again by college and professional a cappella groups (e.g. Africa, Possession). They have a great original song with For You, but fall a little short with their other original song, Learning To Fly. The soloist in Learning to Fly creates a nice laid back feel for the song, but intonation problems and something that I like to call "rhythmic clashes" doom this one to its fate.

The vocal percussion on the album wasn't anything spectacular but it did fit the groove in the songs where it was applied. The best moment for VP on the album is in Smells Like Teen Spirit where it enters and really darkens the intensity of the moment.

I give Random Association a lot of credit because I feel that if I would see them perform live, they would sound as they do on the album. There wasn't a lot of studio doubling and effects showing up in the tracks on this album, thus making it very believable.

I look for good things in the future for this group. Added energy into a better track list of more originals and better choices in cover songs will lead to a very positive final product for Random Association. I don't recommend spending your hard-earned cash on this one, but don't be surprised if this group releases a gem in the future.

There's a lot here for the group to be proud of. I'm a fan of RA's present, natural sound. Effects are used to enhance, not overshadow, the vocal lines. It's exciting to see original compositions on a semi-pro release.

RA also gets brownie points from me for daring to present an almost choral interpretation of Smells Like Teen Spirit, which I can only describe as an artistic risk. It isn't a roaring success as a dirge, but they certainly take the song in directions the original artist never dreamed of. Turns out Kurt Cobain was singing really good lyrics the whole time! Who knew?

The trouble is that while RA's laid-back, grown-up style works well on mellow songs like The Sweetest Taboo and Yours, it's a problem when they cover soul. Energy shines through here and there, especially in the bass and percussion lines, but too many of the songs need more spirit and drive. Take Me To the River soloist Sharon Dorsey, for example, has a clear, smooth tone, but I was begging her to unclench, let go, rock out. She doesn't. Partly for that reason, the arrangement, like several others on the disc, starts to feel repetitive a few measures into the four minute song.

The album's precise, careful mood makes it harder to forgive the occasional tuning error, such as a flat held note in Take Me to the River and one wince-inducing glitch in the Possession intro. I'm sure that this group is capable of fixing their other technical problems (like sopranos sticking out of the block, and some ponderously slow tempos).

This album is a promising debut, but the singers just don't seem at home in some of the music. Random Association is good at clean, conservative singing. I hope that in the future, they focus their repertoire on songs that show off that strength.