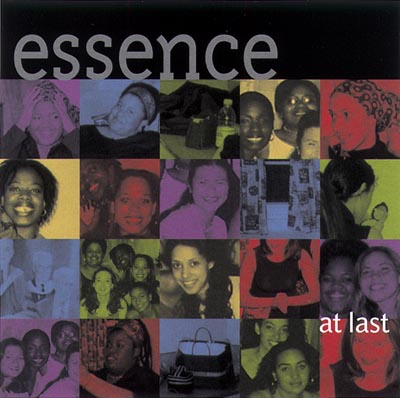 At Last is an excellent album from a very talented group. It does a great job of conveying the group's "love of Black music".

Running the gamut from jazz to pop to standards, the tracks on At Last are all smoothly sung and heartfelt. Soloists show remarkable maturity and musicality, touching more than the hem of such greats as Etta James and Boyz II Men. At no point did any soloist seem out of place.

Backing vocals work so well with the lead and with each other they should hardly be called "backing"; along with the transcendent leads, the shining harmony makes almost every song a winner. Some unconventional octavized altos help to fill out the sound (adding crucial undertones to the otherwise notoriously shallow all-female blend), and solid percussion adds a great deal (although it sounds sampled, and along with the octavizing casts doubt on the liner notes' claim that "All the sounds you hear are 100% pure Essence").

If anything goes awry, it is the singers' admirable attempts at innovative interpretation. The whole album, just like the first song, leaves little time for establishing a motif before racing away into vocal flights of fancy. On tracks like Hold On, the listener is treated to solo decoration immediately, so there is nary a chance to hear melody on its own, without elaboration. One might say that these songs are so well-known that the melody lurks beneath them without needing expression, but in burning so brightly so immediately, the singers leave little to the imagination or to the second half of most songs.

All in all, a great disc from a great-sounding group.

When I looked up synonyms for the word Essence, the first four matches jumped right out of the book at me: Heart, Spirit, Core, and Soul. The girls from Tufts University Essence have all four of these...it's not just a clever name.

The album opens with an energetic rendition of Hold On by En Vogue. They open their arrangement with a snippet from Who's Lovin' You Now that left me wanting more. During this opening, when they hit the word "bad", the wall of the chord should simply open up and fill the stereo. (See The Best of Harmony Sweepstakes, track six, sung by A Perfect Blend.) In Essence's version, I feel it was voiced wrong, as well as being poorly sung, which caused it to only peek through instead of blossom open. Don't worry, though; once the guts of the song kicked in, it was well worth the listen.

Thank You and Can't You Stand the Rain from Boyz II Men were two of my favorites on the album. I also thoroughly enjoyed their rendition of Carl Thomas' Summer Rain. Essence has the luxury of many very colorful soloists that allow them to tackle all the realms of Black music in all its wonderful forms.

Being from Philadelphia (at least currently), I enjoyed the inclusion of It's Love by Philly's own Jill Scott. I'm partial to other a cappella recordings of Ain't No Sunshine by Soul 4 Real, but Essence still did the song proud with their own flavor and sound.

Criticisms: background energy. There were many points (even in the better songs) where I wanted Essence to just let loose and give me what I could tell they had in them. I could probably point out the exact spots that gave them trouble in the recording process because they seem to be singing to the click-track and chords instead of the audience listening through the stereo.

Nobody was given credit for any of the vocal percussion on this album. This is truly a shame, because there was some great stuff happening back there.

Amazing Grace was a major letdown for me. This is one of the greatest inspirational songs of all time, and instead of filling up my speakers with wonderful soul, they seemed to be preoccupied with being Destiny's Child rather than being Essence.

As far as soloists go, my choice for best solo on the album would go to Leah King on Summer Rain. It wasn't the flashiest one on the album, but it was the one that really captured the song in an distinctly individual style. An enthusiastically sultry voice added to the arrangement's sense of style.

This is a superb effort from a very talented group of young women. All-female collegiate groups could learn a lot by purchasing this album, and consumers could add a very unique collegiate sound to their always expanding a cappella collections. Essence has made me a fan. One listen, and they'll hook you too.

The best word I can think of to describe Essence's album At Last is "joy".

Every note and chord resonates with energy and love of singing. So often women's a cappella music is thin and lacking in bass and resonance, regardless of how well it is executed. Not Essence. I really feel that there is nothing like the voices of African-American women; they have such natural depth and amazing dexterity, as is so clearly demonstrated on this album.

Essence's blend and balance are perfect, with every note beautifully tuned. What I really love about them is that they have achieved this high standard without sacrificing the soul of their music. They are clearly totally involved in the singing experience, which gives every song life and depth.

The arrangements are very well stacked. My hat's off to the main arranger, Dionna, who has worked in the quality of the different voices beautifully to create a wonderful layered effect.

The choice of music is varied, and looking for a favorite, I was torn between two: The Etta James classic At Last and Summer Rain, a cool ballad with a soulful solo.

Essence has a fabulous bass section, giving depth and richness to each song. They have used octavisation on one or two tracks to gain extra effect, most noticeably on Stevie Wonder's As. Here, the bass reaches the second D below middle C (an achievement most male basses would be proud of!). I don't mind hearing a bit of tweaking on a couple of songs, and was pleased to hear their natural talent on the other tracks.

This is definitely the finest example of all-female a cappella that I have been fortunate enough to review.