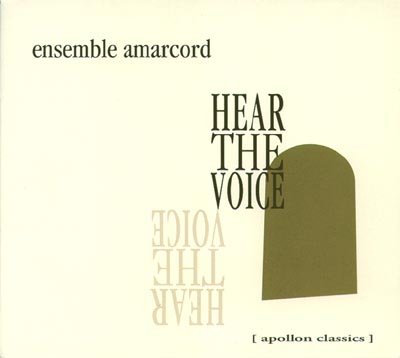 Hear the Voice is crisp, clean, and exact. Ensemble Amarcord and their fans should be very proud of this release.

This project is missing life in the music. I was constantly dozing off while listening to this album at home, work, and in my car. (Don't worry, no road kill was created due to the onset of drowsiness while driving.) In this album, the energy and passion behind the music has been pissed away in favor of precision vocals. Some people would argue that this is not necessarily a bad trade-off, but I feel that a more balanced approach would have made this project much more enjoyable for the listener.

As disappointed as I was with the lack of vivacity in this album, I can't let myself be completely negative about it. The singing is very good. The musician inside each member of the group shines through as they sing some very intimate musical passages.

The songs are there. Their obvious talent is there. They just need a few lessons in passion and enthusiasm to finish off an otherwise quality project.

The five members of Germany's Ensemble Amarcord sing like angels and look like the Backstreet Boys. Well, a little more clean cut. But they certainly bring to mind British string quartet Bond, four women with impeccable musical chops who happen to look (and sometimes dress) like Victoria's Secret models.

Speaking of musical chops, don't be fooled by Ensemble Amarcord's pretty faces. All of them trained in the prestigious St. Thomas Boys Choir, and their intonation and blend is near-perfect, although I felt their tone-quality was occasionally thicker than I would have liked.

Mrs. Haas, my mother's late piano teacher, had such perfect pitch that the rest of the music world had a little trouble keeping up with her. Back in the fifties, she would call up WFMT, the classical station in Chicago, to inform them that their turntable was running slow; she (unlike the DJs) could tell that the pitches were ever so slightly flat. They would check, and sure enough, the gears would be ever so slightly out of whack, every time.

Ensemble Amarcord would meet even Mrs. Haas' exacting standards. The five alumni of Leipzig's St. Thomas Boys Choir (as in, the one Bach used to direct) sing together about as well as anybody I've ever heard. On Hear the Voice, their third CD, they illuminate a brilliantly balanced program of sacred works from the last five centuries.

Hear the Voice made me question every tuning 5 I've given in my RARB career. I'm a giant choir dork, I know, but I had to hit repeat just to savor the final sibilants on track 15. I know they're speaking their own language, but German is just plain hard to sing, period. How do they get every "ch" exactly the same length?

There's not a track on this CD that isn't world-class. Several listens resulted in exactly two negative notes. I thought the first tenor sounded a hair loud and bright on the high held fortes of the Orff piece, overbalancing the basses. That's tenors for you. I also thought that the singers' German accents were just detectable on certain English words in the titular Tallis piece. Horrors. Further, while the liner notes are in both German and English, the texts themselves are translated only into German, so those of you who are lyrics buffs better get out your Latin dictionaries. (On the other hand, the notes also include a couple of charming anecdotes from the history of my college choir program, so I'm inclined to be forgiving.)

If you're looking for classical a cappella, it just doesn't get much better than this.