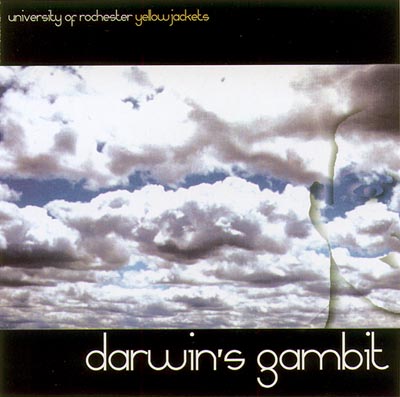 In chess, a gambit is the offered sacrifice of material, usually something small like a pawn, in the hope of gaining the initiative, quicker development, or some other imbalance over the opponent. If this is what the 'Jackets have in mind, Darwin's Gambit must refer to some trade-off in evolution: perhaps we humans long ago gave up something small in favor of racing ahead to what seemed like an advantageous evolutionary point.

What does this have to do with the disc, or the group? I don't know for sure. My suspicion is that the group's ancestors, or alumni, traded away some feature of their music in favor of some other. The 'Jackets have a long history of clean, well-harmonized sound, but they have also been criticized for lacking oomph. In these ways the current recording inherits its predecessors' legacy: Darwin's Gambit is (mostly) cleanly sung and (mostly) well-done, a solid album with much heart but without a lot of power.

Tuning is rarely an issue, but blend falters: the sound is top-heavy, and not all parts can match intonation. Soloists are credible, sometimes decently aping (Babylon), sometimes striking out on their own (the disc's two originals, the swiftly farcical Big Universe and the more accomplished if straightforward Ashland Place).

Why no power? Levels are fairly uniform throughout, over crescendo and decrescendo, and across different tracks. Percussion is slight and underemphasized, along with the bass. Clearly the 'Jackets can harmonize; in the future they might aim for more obvious energy, grounded in a more audible and forceful rhythm section.

All in all, Darwin's Gambit is an enjoyable album, sure to satisfy most listeners.

We at RARB don't typically make reference to our fellow reviewers within the context of our own reviews, but I for one can say that I'm very interested to hear what my colleagues Benjamin Stevens and Hanna Stotland will have to say about the University of Rochester Yellowjackets' Darwin's Gambit, the group's 11th release in as many years. Hanna reviewed their last two albums, Ben their last three. Wilson Boulevard and Common Time were very well received by RARB, their last album, Visions, less so.

Ya' see, I've known about the the 'Jackets for quite some time — even caught a couple of highlights on the BOCA CDs — but I'd never sat down and listened to one of their albums in its entirety. What I found with this CD was a group of very talented singers who fall just a hair short of excellence in most of the major categories.

Truth is, if we utilized half points in our reviewing, I'd have a great deal of use for them in reviewing this CD. There are a number of tracks that are certainly better than good ("4") but fall short of being truly excellent ("5"), such as Babylon and Wonderful, which are held back by mixing problems. Similarly, there are a couple of tracks that are certainly far better than what the average ("3") group could turn out but with as many issues as I had, could not fairly be rated as good ("4") — Only the Good Die Young and Crazy For This Girl to name two more which had issues with the arrangement as well as the mix.

That's the thing about the Yellowjackets. You want to like them because they're clean, they're musical, they sound pretty, they blend well, and overall, it's an enjoyable listening experience. At the same time, as a red-blooded a cappella fan, you want to slap them around because they're almost too clean, too smooth, too pretty. You want to grab them by their collars and slap some virtuosity and emotion into their solos.

Judging from RARB's reviews of the Yellowjackets' previous work, these problems have been around for a while. The old reviews are full of comments that apply just as well to this album.

"Nice to a fault, they never really rock." — Benjamin Stevens on Common Time.

You want to grab the arrangers and beg them to use the same creativity they utilized in establishing each song's groove to expand and develop the arrangement into something thrilling, rather than relying on same monotonous (albeit effective) rhythm, syllable and chord structure they started with. There certainly appears to be a conscious effort made on this album to broaden the scope of their repertoire to include a sampling of edgier material. But when reflected through the 'Jackets' arranging prism, even music which borders on the less typical (see Guster, Everclear, David Gray) seems to creep back toward the mainstream center with an almost generic sound.

"[The Yellowjackets] have a slightly mechanical quality, as though the block is making a training tape to teach the arrangement to others." — Hanna Stotland on Common Time.

And more than anything, you want to grab the producer and the engineer and explain to them what a solo track is. I played this CD on three different systems just to be absolutely sure I wasn't crazy, and sadly, I wasn't. The solo really is mixed that far back in most of the songs, and the levels on the background really are so disproportionate that they drown out the bass lines and other decorative lines more often than not. On the one hand, it's a tribute to how hard the group has clearly worked to arrive at a full, rich, robust sound. On the other hand, it's a travesty when you consider that several in the group are arranger/soloists whose work on the former ends up obliterating their performance on the latter.

"...the mix drowns out parts I really wanted to hear more of, like solo riffs, the bass line, and in some cases even the lead vocal. When I hear this kind of mixing, I immediately suspect that the group is trying to hide weaknesses, but for some reason the producer is hiding solid bass lines and terrific ornaments." — Hanna Stotland on Common Time

Exactly. Seems as though there's little I can say that hasn't been said before. So I'll leave it at this: the 'Jackets are stalwarts of collegiate a cappella and remain damn good. I just wish they'd get damn better.

The Yellowjackets I used to admire are back, and in some ways, they're better than ever. They still do a great job with strong, lush held chords. Their parents still aren't listening to the block syllables ("Someday...I'll get laid; Someday...I won't have to pay for it."). But this is the first album I've heard where the group manages to combine those lovely chords with block energy on more than a few tracks. On songs like Barrel of a Gun, I could hear the conviction in every voice.

Everything the Yellowjackets do best, they do on Dream Lover. The production on this track does a beautiful job of combining old-school a cappella sound and modern studio techniques. I wouldn't have thought that the doo-wop vibe of the chords could blend so well with the brilliantly imitated guitar-plucking effect, but blend they do. Rob Gellman has so much fun with the solo, I'm sorry every time the song ends. And while we're on the topic of fun, I hear a lot of college originals, most of which suggest that college songwriters listen to a lot of Radiohead. Will Jennings, composer of Big Universe, strikes me as more of a Weird Al fan.

The Yellowjackets still have plenty of room for improvement. Many of the tracks are too even dynamically. For example, I was listening for a real swell on the chorus of Babylon, but the tension in the verse is never resolved. Several soloists audibly stretch for notes that ought to be within easy reach. And some quotes work better than others; I loved the snippet of Simon & Garfunkel's Homeward Bound in I Don't Want to Live on the Moon, but I'm not sure why there's a chunk of Chopsticks in Only the Good Die Young. Still, The Yellowjackets are a distinctly above-average group, and I'm glad to see they've turned out another above-average album.