The Ambassadors of Harmony 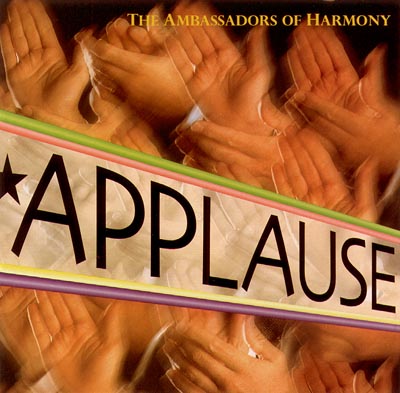 Warning to all short people: do NOT buy this album! The Ambassadors of Harmony tear into our vertically challenged friends and family with the quirky little song Short People.

Short people got no reason to live ... They got little noses and tiny little teeth. They wear platform shoes on their nasty little feet. Well I don't want no short people 'round here.

I loved the humor in this song. With that said, they're lucky I'm over six feet tall or this might be an entirely different review. (Insert evil laugh here.)

The Ambassadors of Harmony are a very accomplished male barbershop choir. The Ambassadors hit the nail right on the head with songs like My Honey's Lovin' Arms and Toy Song, but miss the barbershop boat completely with contemporary songs like The Music of the Night and Friends. I know people argue with me when I make this point, but in my opinion, I don't like hearing barbershop quartets or choirs singing contemporary music that was never intended for barbershop. On the same token, I wouldn't like to hear a contemporary choir or band cover a standard barbershop song. It's just personal preference, but I feel this would've been a much stronger album if you replaced the non-traditional barbershop tracks with music written and arranged for a barbershop choir.

This is a mammoth choir. This is also my first review of an album done by such a large barbershop ensemble. I liked parts of it, but I also disliked parts of it. At times I felt like I was listening to a college glee club, and at times I was amazed at the ability to get so many men to sing so well together in such tight barbershop harmonies. Tracks like Through the Years and My Honey's Lovin' Arms showed the emotional and dynamic extremes of the group, while tracks like Happy Together showed that they're still just a big male barbershop choir.

The Ambassadors of Harmony are a barbershop chorus made up of around 100 men (as credited in the liner notes). Applause is their third release. Within the inherent characteristics of the barbershop genre, these guys have put out a pleasant and enjoyable album.

For such a large group, they have amazing blend, great dynamics, clear diction, and crisp cutoffs. The Ambassadors hold out the traditional impossibly-long ending notes with precision and clarity.

Their arrangements are simple, but effective. Their song choices range from the cutesy Randy Newman tune Short People to Tonight, the lovely Sondheim piece from West Side Story.

With so many guys in the group (who have so many friends and family), it seems like they should have no problem selling out of albums every year. But if there are any left, and if you are a fan of barbershop, this is a worthy addition to your collection.

Anyone that cared to read my bio knows that I love barbershop chorus singing, especially when the chorus is good. It's even better when they produce an excellent CD to listen to over and over and over and....

The Ambassadors of Harmony Chorus from the St. Charles, Missouri chapter of SPEBSQSA have produced such a CD. The music covers the entire spectrum: some traditional barbershop, some ballads, some up-tempo tunes, and some pop. Not only do they sing them all, but overall they sing them very well.

They open with three songs that are really done well. The title track Applause is a show good opener with strong chords. It's fun to listen to, with great use of dynamics. On the second cut, the basses nail the intro. The entire chorus then demonstrates how to utilize good internal dynamics with properly balanced chords and matched pronunciations. On Years, they very nicely attack the beginning measures of the song and follow that with some gorgeous cascading chords. Then the leads step to the front with very nice singing, masterfully leading the other three parts. They could not have done anything more with this song.

At this point, I am really excited about this CD. On cut four, My Honey's Loving Arms, they stumble in a way that confuses me. It was nominated for a CARA in the Best Barbershop Song category. I can't hear why. It's not even the best song on this CD. Arms has lots of synchronization problems, and several times I detected sections losing the tonal center.

The next cut is a song I don't like and haven't liked from the very first time I heard it in 1967. It's the Turtles' hot hit Happy Together. I think it's the best track on the CD. It's a great arrangement by their very talented Associate Director, David Wright. It starts with a pulsing bass section. The rest of the sections join in and they have fun with it. This track communicates how well the Ambassadors of Harmony can sing. Quite frankly, this is the first time I really wanted to give a song a "6" — amazing for a song I could not stand before hearing this version.

Cuts six and seven are two songs from the group's 2001 competition set. I like the songs, but I could hear a missing element: the visual staging. There were places in the music that needed emphasis which was not there. I'm willing to bet that the emphasis was visual and could not be recorded. A chorus that has been ranked in the top five barbershop choruses for seven out of eight years doesn't miss obvious points of emphasis.

The rest of the CD is not sung as well as the first part of the recording. There were some technical faults and some musical failures, but I still liked what I heard

This CD is a very enjoyable to listen to and should be in every barbershop fan's collection. It's good enough that lots of non-fans should also consider it.

To order by mail: Send your check for the item price plus $2.50 US for shipping and handling. Make payable to: The Ambassadors of Harmony