The Persuasions Sing The Beatles (2002) 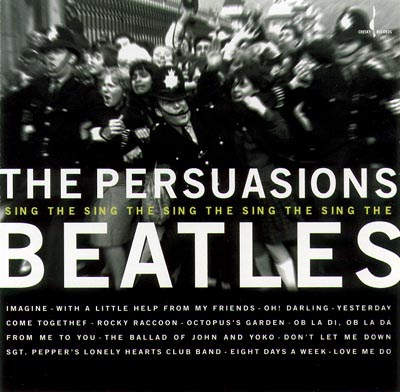 The Persuasions are perhaps the most prolific of a cappella's elite luminaries. Their latest release, The Persuasions Sing The Beatles, will likely appeal to longtime fans of these gritty, soulful, and streetwise singers. The Persuasions have a sound that can be applied to a wide variety of songs. And as a true compliment to the Persuasions, no matter what material they interpret, they never lose their own unique sense of style.

However, despite The Persuasions' signature stamp, Sing The Beatles is a seriously flawed CD. The liner notes claimed that 6 weeks of daily rehearsals went into preparing these 14 songs. While this was plenty of time for these veteran soulsters to prepare rough, heartfelt deliveries in their own trademark style, it was simply not enough time for arranger Jerry Lawson to master the harmonic complexities of the Fab Four.

Having now heard The Persuasions interpret standard doo-wop, The Grateful Dead, Frank Zappa, and the adorable songs comprising The Good Ship Lollipop, their release for young audiences, I arrive at the perplexing conclusion that though Sing The Beatles contains my most favorite songs, it also contains my least favorite interpretations.

The Beatles' original deliveries and arrangements brought never-before-heard textures to rock music. As a producer myself, I often advocate the credo that less is more; I applaud the idea of recording "in the raw" without studio trickery. But in the end, the listener has only the finished product, not the process. So principles aside, Sing The Beatles lacks reliable intonation, full, interesting arrangements, and dynamic and tempo variations. Whether this comes as a result of producers David Chesky and Jerry Lawson's no-mixing, no-over-dubbing, sing-around-one-mic approach, the sometimes troubled arrangements, or both, I do not know.

What I do know is that, despite these shortcomings, fans of the Persuasions can still sink their teeth into 14 well-known, sing-along hits. And for fans, that alone has to be a good thing.

The album was recorded in a way most professional and even collegiate groups have abandoned for a more sophisticated studio sound: four guys standing around a single mike in a church. The arrangements are as simple as their recording technique, and for the most part, they are effective. On more complex songs like Come Together, the sound isn't as full.

With this recording method there are of course issues with blending (competing vibrato most often), pitch, and crispness. Four guys standing around a mike get tired and can only record a song so many times. However, it is impressive to make an album of this caliber when each song is one full take and there is no mixing.

Impressive as that is, there is still the issue of subject matter. This is The Beatles. A phenomenon. "Bigger than Jesus" as Lennon once said. If you are an avid Beatles fan, I wouldn't recommend this album. You won't be able to stop yourself from comparing these versions to the originals, and they will inevitably fall short.

The Persuasions bring a unique style and raw sound to their recordings that bring to mind a different era of a cappella. If you love The Persuasions, you will love this recording too.

Rather than cover music that the general population agrees is quite good on its own, I think the Persuasions would be better served in taking what goes for popular music nowadays and making it better. What they should do next is take the inane bubblegum songs of Britney/'N Sync and give them some soul and personality. I eagerly await The Persuasions Sing Pop Stars of the '90s.

This is a fun job. Four guys and two of their friends show up in my headphones and sing some great music. It's not just about some group singing to me, I can keep right up with them. I know all the words, I know the chord progressions, and I even know a few dance steps that go along with the music. What an easy job this is!

What began as fun listening became admiration for The Persuasions Sing The Beatles. For those of you who don't know who they are (The Persuasions, not The Beatles), this group formed in the early 1960s and have sung through all the historical and musical events that you can remember. Their music reflects that history.

The Persuasions' original style was heavily shaped by black 1950s and 1960s gospel. They also mixed in the sounds of the black pop groups of Motown and the '60s black dance bands that sang on college campuses throughout the southern United States. They added a heavy dose of multicultural '50s doo-wop and New York corner singing. Finally, to this fascinating mixture, they have added the music of The Beatles (it always sounded better when Ed Sullivan said it).

The results are a wonderfully musical, historically blended set of songs that are just plain fun to listen to. If you were around for the second phenomenal event of the last century (Elvis was first), you know all the words and you can join right in. It's great.

"Just how good is the a cappella?" you ask. Wonderful. April 30th, 2001, these guys set up a single microphone in New York City's St. Peter's Church. Someone gave them a cue and off they went. What you hear is each member responding to 40 years of listening to the others. You also hear a room that provides the warmth which studio electronics will never achieve. At the end of Love Me Do they fade out not by turning a knob on a mixing board. They step away from the mics. This is music the old-fashioned a cappella way.

As always, some songs are better than others. But The Persuasions Sing the Beatles is wonderful music, and breaking the CD down song by song spoils it. Just enjoy and have fun.

Should-You-Buy Test: Do you like:
The Beatles?
Gospel?
Doo-wop?
Music history?
Pure a cappella (i.e. no electronics, no vocal percussion, nothing but voices singing)? or
Just good music?
If you answered "yes" to two or more questions, this is a must-buy. Heck, even liking just one category will qualify you as a fan of this CD.