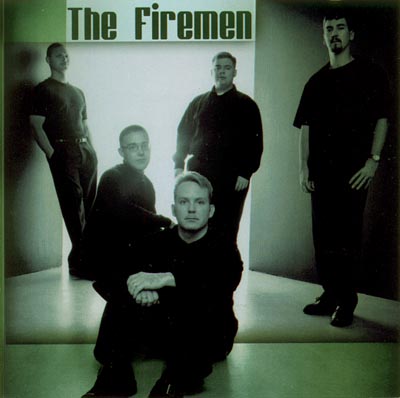 Contemporary Christian vocal music is bound to a strange set of conventions with a heavenly host of good intentions. The Firemen set out within that framework and put out a pretty good album, but let's take a minute to consider the ground rules.

For example: songs about God's wrath, good; songs about secular love, bad. For a genre that's supposed to be all about faith and good examples, it doesn't quite add up. So the Firemen can sing "Pharaoh, a wicked evil man" with the casual nonchalance of a kid singing Barney songs, but they can't sing a song about two people making their way through life unless they are turning to Jesus.

There's also a religious mooring for voices-only singing. According to some interpretations, a cappella singing is truest to the Christian tradition and instruments are a modern deviation. The basic premise is that instruments are mentioned in the Old Testament, but not in the New Testament. Jesus and his disciples sang together often, presumably without instruments, so modern-day followers should follow suit.

Given that reasoning, I've always wondered about modern Christian a cappella and its often heavy reliance on studio processing.

This is an a cappella forum, however, so let's give The Firemen the benefit of the doubt; they could be singing a cappella because they like it, not because they feel scripturally forced into it. They have a great energy about them, and they've kept a small-group sound that is missing from other Acappella Company bands. Most of the music sounds like they could perform it live, although they did indulge in a few guest singers and a supplementary vocal percussionist.

Four Firemen-penned originals are among the best tracks on the disc, suggesting that this group has a bright future if they stay on their current path. Only one cover could keep up, an energized Stephen Curtis Chapman number that closes out the album. Dive and its fellow bookend Can I Come (by Fireman Brian Fuller) are good enough to transcend their genre. Even if they still follow the rules.

While neither head-turning nor groundbreaking, the self-titled disc from The Firemen is still a well-sung collection of Christian a cappella. Good tuning and vocal preciseness are the hallmarks of the disc, with arranging skills and energy sometimes falling short of the mark. Half of the tracks are originals, and half are covers by artists like Michael W. Smith and Steven Curtis Chapman.

The five young Firemen create a nice, full sound. The strong and rhythmically effective bass supplies the solid foundation for the rest of the block, which tunes and blends well. The result is a warm and accessible tone. It's not too flashy or bright, but honest and tight.

The arrangements don't always utilize this full sound well, though. Can You See His Blood starts off with a rhythmic, homophonic block. When you expect the arrangement to open up, the block changes to words and joins the solo. The singing is tight (their moving notes match up beautifully to great effect), but the arrangement could have done much more to flesh out the feeling of the song. Similarly, The Little Girl has a beautiful intro with a little rhythmic interplay between tenor voices, and then stays in sustained block chords for most of the rest of the song, with virtually the only rhythmic movement provided by the vocal percussion. In the bridge and outro, there's nice interplay between tenor voices again, and the music becomes so much more interesting. These lines are subtle enough that similar incarnations would have done much if added under the verses.

The production is clean and enhances the warm sound, although I think interesting background parts are often mixed too low. The secondary lyrics in the chorus of Let Me Show You ("somebody gonna hold your head up..."), for example, are mixed so low that I missed them on my first listen. The background in the chorus of Dive (my favorite track on the disc) stays too low to be congruous with the addition of more rhythms in the block and increased intensity from the lead. In the final repeats of the chorus, there's a great descant that comes through, although I'd enjoy it more if it were added on top of a wailing block.

The soloists all have great voices, but the solos are lacking something. I can certainly understand the wholesome tone aimed for, but without a bit more soul and swing, the tone can come off as flat and rigid (Can I Come is one example). Similarly, on some tracks (Pharaoh and Little Girl), the lead loses vocal intensity in order to sing quietly, coming across as anemic instead of quietly intense or tender. But much of the time the intensity and soul are there. The highlights are Can You See His Blood and Higher Perspective, which have great, soulful leads, and I Know a Man, which sports a high-energy, rocking solo. The reggae dub bit in Let Me See is fun, too.

Now that I'm done harping on the negatives, I can reiterate that The Firemen's sound is quite good. Warm, if not a bit too bland. If you're in the market for some family-friendly Christian a cappella, you should be pleased with this.

The Christian a cappella group The Firemen have created a very good CD entitled The Firemen. The songs on this are ones that you will probably not find many other places. The collection is sung in a variety of styles, yet they blend together for an enjoyable album.

The basic sound that The Firemen produce is very broad. They are generally accurate in singing individual pitches. As a group they blend well. Finally, their diction is very good.

All this technical stuff is OK, but do they make music? Yes, and music I enjoyed. On a couple of songs they made me forget that I was working on a review. Instead, I was just enjoying the music. That's a pretty good recommendation of their work.