Madhatters & Tangled Up In Blue 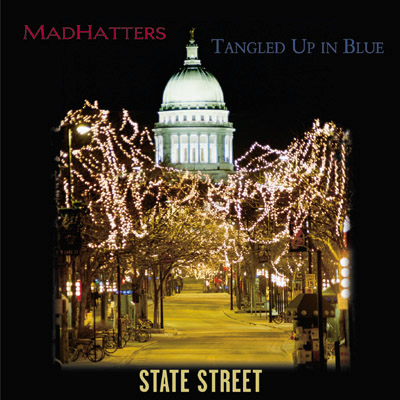 Just when I thought I knew all of the hotbeds of collegiate a cappella, along come The MadHatters and Tangled Up in Blue from the University of Wisconsin-Madison. I mean, really...Wisconsin??

Simply put, this disc is fantastic. Ten tracks (five from each group) is the winning combination for these Upper Midwesterners. The soloists in both groups are first class, with subtle inflections and smooth tones. All of the arrangements are well constructed, capturing the essence of every song and presenting it in a way that showcases the strengths of the respective groups.

The specifics for the men: Here's to the Night is the epitome of perfection for collegiate a cappella tracks. Bravo to Chris Yahng for the solo...so simple, and yet, so powerful.

I didn't care much for Desperado. Really nice solo, but there wasn't any energy or charisma in the backing vocals to get me excited about this track. Insomniac is the classic Virginia Gentlemen arrangement, which has been done by a host of other all-male groups. It's All Been Done was a bit "choir-ish" for me. The odd amounts of reverb on this track made it sound a bit looser than some of the other tracks on this disc. A more aggressive approach to the song would've helped to bring this track up a level. It needed more of a bass presence too, especially in the last chord of the song.

The specifics for the ladies (how YOU doin'?): Breathless is by far the highlight from this half of the disc. The Madonna medley had tons of great energy in the background voices that other groups who have attempted to perform these songs have failed to achieve.

I wasn't a big fan of I Will Remember You. This track is in the same boat as Desperado. A pretty solo, but not much more than that. As I Lay Me Down was surprisingly good, but wedged between I Love You Always Forever and I Will Remember You, it came across as the mellow part of the disc.

Here are my little pet peeves about this album. First, Delee Har is credited with all of the arrangements except for Insomniac (which was by The UVA Gentlemen). I don't see Delee listed as a member of either group, which bothered me a little. I don't mind when groups get outside writing assistance now and then, but do you really need EVERY song arranged by someone else?

Second, Chris Yahng did a lot of work on this album (soloist, director, executive producer, layout, cover photo, and production staff), but is it really necessary for him to have his own "special thanks" section under the group section? I could show you a plethora of groups that have one individual as that group's key member. In a lot of cases, that one person handles all the roles (and more) than Chris did, but never takes personal credit for it. Collegiate a cappella is supposed to be about the group, not the individual, and I was a little peeved that he (and the group) would allow this to happen.

Summing everything up, aside from my insignificant personal peeves, this album does stand out in a crowd. Ten quality tracks and countless hours of listening pleasure. Go and get yourself a copy...ya hear?

All the arrangements are done by album producer Delee Har, with the exception of Insomniac, which is a transcription of the famous Virginia Gentlemen version on BOCA. Har's arrangements are solid, focusing on beautiful harmonies and smooth, blendable background voicing.

The group may want to consider arranging some songs themselves, just in case Delee moves or doesn't have time. But one arranger producing uniformly good arrangements is better than multiple arrangers producing some stellar and some abysmal arrangements.

The album can be summed up in one word: pleasant. These ladies and gents are skilled singers. They have an excellent blend helped along by Har's arrangements. They have a sweet, smooth sound that I really enjoy. Their execution is impeccable and there isn't a sour note in the whole album.

The soloists have pleasing voices — nothing too nasal, nothing too harsh, but also nothing particularly distinctive. They could have swapped solos on any of the songs (guy to guy, girl to girl, of course) and the song would have been just as good.

The album has a very cohesive feel, also helped along by Har's arrangements. The groups don't try to throw in every genre. The groups aren't edgy; they don't rock out or wail like Off the Beat. But they do what they do very, very well. Overall, their music is effective. It is nice to hear contemporary a cappella that is so smooth and, well, so pleasant. A cappella easy listening.

Some of the song choices were not my favorite. While the Madhatters do Insomniac justice, the blue ribbon remains with The Gentlemen. I could see I Love You Always Forever and As I Lay Me Down to Sleep on a TV commercial for a cheesy girly compilation CD. But the ladies performed all the songs splendidly.

Recommendations: Gents — Don't borrow arrangements from other groups, because you don't need to. Ladies — put the bass line higher in the mix next time, have more basses than sopranos, and keep the bass part below an A below middle C as often as possible. Try to include a mix of songs that are popular and songs that are a little less known.

I'm just in awe of this album. Not because it's the most amazing college CD ever made — though it is darn good — but because of the time, effort, dedication, and money that clearly went into making it. Christopher Yahng founded both The MadHatters and Tangled Up in Blue. He also put up his own money to finance the album's first-class production. The mixing, done at world-famous Westlake Recording Studios, doesn't draw attention to itself with fancy effects. However, each part is perfectly in place, nothing too soft or too loud, and it's all topped off with a gorgeous wash of reverb that makes the project sparkle.

Not that State Street is merely a triumph of production. The Hatters are a highly competent men's group, and TUIB turns in some of the best women's a cappella I've ever heard, the great percussion and convincing bass lines putting to rest the notion that women can't compete in the same class as men's and coed groups.

About that Madonna medley...it absolutely rocks. It sports the disc's most energetic performance, and the infectious sense of fun, seamless transitions, and multiple soloists all serve to highlight that Madonna's music is just as great as her image. I doubt they could have come up with a better closer for the album.

The problems on State Street are few and minor. To begin with, the song choices are less adventurous than I would have liked. Most glaring is the Virginia Gentlemen arrangement of Insomniac — WHY??? Though perfectly competent, the Hatters' performance adds nothing new to this done-to-death standard. Here's to the Night isn't exactly the most interesting song ever written, and I Love You Always Forever, As I Lay Me Down to Sleep, and I Will Remember You are all good tunes but also all quite similar. The background vocals could have used a bit more energy in spots; a good rule of thumb is that if a note is held more than a beat and a half, it should either crescendo or decrescendo. I Will Remember You is just plain boring and could have benefited from some VP. Tony Ehrbar's attempt to reproduce Branford Marsalis's lighting-fast soprano sax solo is badly out of tune and mars an otherwise excellent rendition of Sting's rhythmically and harmonically tricky I Was Brought to My Senses. Although the arrangements are pretty much flawless, not one of them was written by a member of either group. Rather, they were all, apart from Insomniac, written by Delee Har, who went to high school with Chris Yahng and went on to found the JHU AllNighters. That doesn't affect the quality of the album, but it does lead one to wonder about the future of the groups now that Yahng has finally graduated.

And finally, I wanted to hear more. For groups of this high caliber, five tracks each simply aren't enough to satisfy this listener. Nonetheless, State Street is a wonderful debut album of which both groups should be extremely proud, and I can't wait to hear full-length albums from The MadHatters and, especially, Tangled Up in Blue.

Available from Mainely A Cappella or through the groups' joint web site.