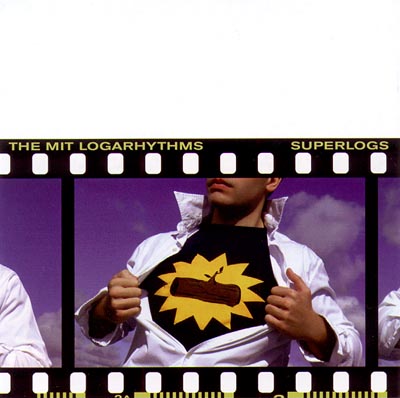 After listening to this album three times in a row, I felt like running out and joining a fraternity.

Never mind that I am too old, too asocial, and the wrong gender. The new MIT Logarhythms album seemed to sing the glories of being a 19-year-old smartass male with mild pack sensibilities, and I started to feel that writing only about their music would be missing the point. The music on this album is fine, the sort of thing that would have been great in the old days but is now average, as the a cappella standard has risen over the years.

The voices are good. Lots of fuzzy, boyish tenors who can sing the songs and cut up in front of their friends. The arrangements are on the spare side, so that everything sounds like it was made in the 1980s, whether it was cribbed from modern acts like Blink 182 and Usher or from artists like Wham!. A basic drumbeat. A few synthesizer chords, and maybe one or two lines of repetitive texture. Music to bounce to. If you're going to evoke a single era, this one's as good as any. It sure beats the heck out of 1970s pretentiousness or 1990s cynical angst.

The simple arrangements sometimes turn out quite well, especially when paired with some creative touches. Exhibit A is the Shai song, If I Ever Fall In Love, where they rearrange the basic hook and the background comes together beautifully. Unfortunately for that song, the soloists don't quite have the right touch and are further sabotaged by the production, which put the second soloist too far back in the mix and made the two leads jar against each other. But the background is lovely. Heavenly had the opposite problem. The solo was fine, but the background was muddy and out of tune, leaving the empty spaces that much more exposed.

Mysterious Ways, All the Small Things, and Hungry Like the Wolf (an actual Duran Duran song) all sound like Duran Duran. Trivia hounds will be pleased to note that the opening cut, Freedom, is the one from George Michael's days with Wham!, not the oft-covered number from his solo days. Music aficionados will be sad that the group chose to open with a song that isn't as well executed as some of its successors. The best song on the disc is Yellow, which has a great ensemble hook and is arranged with texture and creativity but not too much clutter.

The closing track cemented the fraternity atmosphere. It starts out with about 30 seconds of hidden track, of the laughter-in-the-studio variety, then goes into a version of R.E.M.'s Superman with rewritten lyrics that are at once self-promoting, risque and banal. For a nice group of cute young men packed into the MIT pressure-cooker, it must have been glorious to perform.

I admit it. When I think MIT, I don't think a cappella. I think NASA. Then Superlogs, the latest offering from The MIT Logarhythms, shows up on my doorstep. Now I feel even dumber. OK, so not only are they geniuses, but lord, they can sing too.

Simply put, Superlogs is a first-rate album with quality singing, solid solos, good (if somewhat artificial-sounding) blend, excellent v.p., and an overall high energy level that holds the listener's attention. Check out the track listing, and if you're a fan of all or most of the songs, pick up a copy.

Now for the inevitable quibbles and random notes. To the casual a cappella fan, some or all of this may seem nit-picky, but hey, we critics are nit-picky by nature.

I guess it shouldn't come as any surprise to me that a group hailing from MIT would have a handle on all of the various engineering and production tricks that studio recording affords today's a cappella groups. And to be fair, it's not an abuse of effects that's at issue here. But the group clearly made a conscious decision to heavily process the low-end vocals. The result is a kickin' bass which so many groups sorely lack, but it also begs the question of how that same low end sounds when heard live in performance.

On a similar topic, the group has fallen into a trap which, at least to me, has become increasingly prevalent in collegiate a cappella: that of mixing the solo into the block rather than in front of it. Especially in an otherwise top-notch arrangement of U2's Mysterious Ways, a solid take on The Goo Goo Dolls' Black Balloon, and a slightly disappointing version of Blink 182's All the Small Things, the solo has been mixed almost into oblivion, overwhelmed by the background vocals and almost inaudible.

The arrangements, for the most part, show a definite inclination toward what I call the "wall of sound" technique. The background vocals are often textured (I'd call them busy), then filtered through a vocal processor with chorus and reverb added, resulting in a wall of sound that bombards the listener. Now, in the faster songs this can work to great effect, as it tends to heighten the intensity and energy level of the song (and sometimes hide little flaws). But in the long run, over the course of an entire album, it can be a bit taxing on the ears. A little less quantity and volume, in favor of a bit more finesse and creativity, would have been welcome.

This will not influence your enjoyment of the album, but I worry a bit for The Logs' future. Superlogs is something of a showcase for the group's musical director Karl Erdmann (solo or shared arranging credit on 8 of the 12 tracks) and primary vocal percussionist David Kong (most of the v.p. on the album plus solo or shared arranging credit on 4 of the tracks). Erdmann graduated this year and Kong graduated last year, so The Logs have some big shoes to fill. Thankfully, in Chris Vu (class of '04) the group has found a terrific high tenor who deserves some consideration for a soloist CARA given his work on Usher's U Remind Me and Michael Jackson's Man in the Mirror. But someone still has to churn out the arrangements.

Frankly, though, most groups would be lucky to have these as their worst problems. Hmmm...maybe these guys can get CASA and NASA together. A cappella in space...someone better call Lance Bass.

Finally, something in RARB that is older than I am. The MIT Logarhythms were founded in 1949, and, just like me, they are still ticking and singing. Unlike me, these guys are making killer music.

Their latest effort, Superlogs, is a collection of twelve songs they performed from 1999 to 2002. There are almost no throwaway pieces, just very good college a cappella.

The quality of this CD is impressive. Although some songs are of higher quality than others, it's among the best college a cappella CDs that I have heard. They sing the tunes with incredible energy. Their vocal diction is very consistent. The production is nearly flawless.

From the opening seconds of Wham's Freedom, The Logarhythms grab your attention and do not let go for four cuts. Their rendition of Freedom matches or exceeds the steamroller power of the original mega-hit.

Cut two, Mysterious Ways, hits you between the eyes. The background singers are phenomenal, doing exactly what they should do — sing enthusiastically in the background while allowing the soloist to shine. Despite the complex arrangement, they never sing off pitch. They also do this on cut 3, Black Balloon, and cut 4, Everywhere I Go.

On cuts 5, 6, 7, and 8 there is finally a slight letdown. The Logs aren't quite as precise with note attacks. Their diction is not as unified. They just miss several key changes. On cut 6, they move the last chord from minor to major for no apparent musical reason.

You'll notice that I rated two songs (cuts 9 and 10) lower than the others. These two songs missed the mark on the fundamentals of music — synchronization, pitch, and solo execution. However, even these less-than-remarkable cuts have musical value.

Man in the Mirror goes back to the high-quality, high-energy production of the first four songs. What a way to finish a CD!

The twelfth cut is a signature song for The Logs. For Logs fans, it's mandatory. For the rest of us, it's interesting, but it doesn't compete with the other eleven.

The singers are excellent, but they don't deserve all the credit for this platter. Another remarkable characteristic of this effort is the superb quality of the production. This is a demonstration of how a studio can add to a group's musical effort. I could hear no flaws in the CD's production, engineering, or recording. The studio added just enough electronic goodies, but not so much that they intruded into the space that is reserved for musical creation.

As you can tell, I highly recommend this CD as an addition to the a cappella addict's collection. I, for one, am hoping that The Logs continue producing quality work well past their century year, 2049.

Superlogs can be purchased for $15 from any Log or can be ordered securely through the Logs web site.