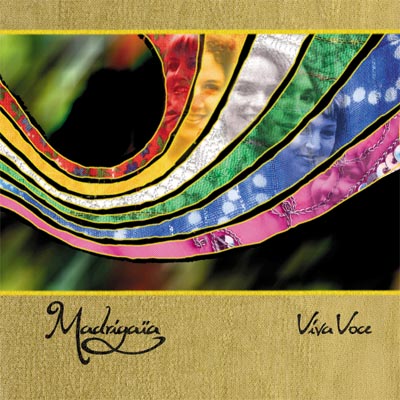 Madrigaïa, a six-woman group from Winnipeg, presents an eclectic set of world music on their debut album, Viva Voce. The repertoire was the highlight of the album for me. Many songs brought to mind the high-voice folk songs in obscure languages I used to sing with the Chicago Children's Choir. Niska Banja, in fact, was one of our standards, and is enlivened here with an acoustic band. (Several tracks also include tasteful percussion.)

This is a style of music well-suited to female voices, and Madrigaïa sounds great on most of it. The best songs on the album are spririted and lively, with a colorful tone and lovely tuning. Many of the arrangments (Grain de Mil) have a whimsical edge that children might especially enjoy. On the weaker songs (which are still very good), a young, breathy sound creeps in, and the uniqueness and snap of the showstoppers are missing. I might have mistaken Yedid Nefesh, for example, for the work of a solid treble choir.

Like many albums, Viva Voce drops hints that it could have been better than it is. Recording, rather than singing, is the problem area. While I agree with the producer's choice to preserve the group's natural sound, I didn't need to hear every gulp of air, some of which interfered with the mood on songs like Elibama. More importantly, sometimes the group could have used another take. The second voice to enter on Ritournelle seems to be digging for low notes which ought to be well in hand, and someone audibly runs out of breath on Tabortuznel. For whatever reason, the group didn't stay in the studio until they had a perfect run.

Also, I expect questionable hidden tracks from college groups, but what's Madrigaïa's excuse? The hidden track cobbles together a number of improvisational pieces, including both a rocking gospel riff and a grating spoken-word round that reminded me of Maria de Medeiros' annoying-voiced character in Pulp Fiction. An unvoiced, rhythmic improvisation of gasps and groans sounded more like a medley of porno vocalizations than a percussion piece. And why are they hiding such a power-lungs gospel soloist at the end of the album instead of offering her an African-American folk song as a showcase? Judging from this wisp of an improv, they'd kick ass if they tried.

Despite these problems, I enjoyed Madrigaia's culture-hopping zest. If you're looking for vocal folk music, Viva Voce is an excellent choice.

Madrigaïa's new CD Viva Voce seems to feature every language but English. They have many songs in French, some in Hungarian, Yiddish, and other languages. All in all, they sing well on the CD.

For this English-as-my-only-language reviewer, the album was a tone poem of many colors. Part of the fascination of listening to the "foreign" languages on the CD was trying to understand the emotion of the words through the musical emphasis used by the group: the phrasing, the accents, the volume embellishments, and all the rest.

Try listening to Yedid Nefesh (based on a Hebrew liturgical poem) without knowing the words. You will find that they emote very well and tell the story through the music. Tabortuznel (Hungarian) is similar. Madrigaia does a great job of selling a song to a language-impaired listener.

Be forewarned, the first sound you will hear on the CD comes from a violin. On four of the sixteen songs, Madrigaïa is accompanied by instrumentalists and/or percussionists. I never felt that the accompanying musicians overran the vocalists. Yet, the best singing on the CD comes when Madrigaïa performs alone. Their tuning is better; their energy is better; as a listener, I enjoyed the unaccompanied cuts better.

I enjoyed this album. Madrigaïa is a collective of six established French-Manitoban singer-songwriters who pool their distinctive voices to sing (mostly) a cappella folk music from around the world, with an original song or two thrown in for good measure. The result is raw, energetic, and a worthwhile listen.

They started with engaging repertoire choices. A dizzying array of cultures is represented here, everything from Hungarian to African, plus plenty of traditional music from Madrigaïa's native Canada. Much of the music is heartstoppingly gorgeous (Yedid Nefesh, Fendez le bois), and some is as catchy as anything on the radio (En filant ma quenouille, Grain de mil). Elibama is a fascinating fusion, layering a Yiddish niggun (wordless melody) over a song from Madagascar to create an effect oddly reminiscent of medieval organum. And Mon arbre, written by group member Dominique Reynolds and arranged, also within the group, by Marie-Claude McDonald, is a delicious original that defies genre boundaries, sounding something like a group of French soul divas covering Gabriel Faure. They are comfortable in every language they tackle; I was especially impressed with how natural they sound on the difficult Indian inflections of Ödi ödi.

My only complaint about the repertoire, aside from the boring Vuprem Oci, is that I would like to see Madrigaïa dig a little deeper to find it. Some of the arrangers' names, such as Stephen Hatfield, will be familiar to anyone who has trod the high-school choir circuit. Perhaps Madrigaïa could spend more time listening to field recordings and arranging the music themselves.

The aforementioned rawness is both Viva Voce's greatest strength and its greatest weakness. The spontaneous, unpolished sound perfectly suits the songs Madrigaïa sings, and it allows an infectious energy to shine through on every track. They're reveling in the simple joy of making music, and it shows. Unfortunately, close listening reveals lots of sloppy singing. Nothing sounds awful, but little tuning errors rear their heads all over the place, cutoffs don't occur together, and high notes are not supported enough and sound thin. A little more rehearsal, if Madrigaïa was careful not to let it detract from the spontaneity, would have catapulted Viva Voce from good to great. As is, it's a fine effort from a promising young group.

P.S. Do yourself a favor and turn off your CD player after track 14. Track 15 is an a cappella version of Niska Banja, which in accompanied form brilliantly opens the CD; it sounds fine but reveals nothing. And the unlisted track 16 is an unlistenable impromptu jam session that goes on for eight minutes (!!!). It's quite possibly the worst of the many hidden tracks I've heard as an a cappella listener. Why indeed...

To order, visit their web site or email them at info@madrigaia.com.