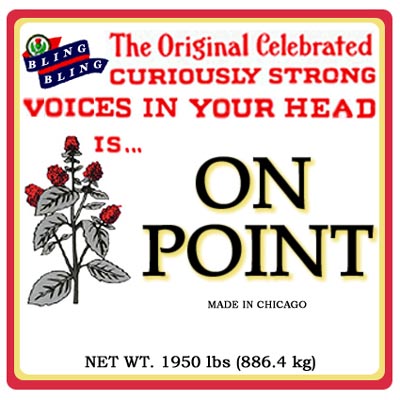 We all have those little voices in our heads. First, we have the one that tells us to do things that are perceived by society to be wrong, sinful, or immoral. We all secretly love this guy, even though we know we're supposed to ignore him. The second voice is the one that tells us what society's professed "right" thing to do is. Not the coolest cat on the block, but he keeps us in good health, out of jail (usually), and predominantly safe from harm. This group from the University of Chicago, Voices in Your Head, is a good combination of both characters. They're wholesome, yet edgy. They're reserved, and still very obnoxious. They're good, but also quite bad. (In a good way, get it?)

The majority of arrangements on this album were great. My personal favorite arrangement was Megamix, a conglomeration of three songs by Real Life, Madonna, and U2 respectively. Each song was given its own sound, but then all three sounds were fused together at the end. The only bad part of the arrangement was the very end where it sounded like the arranger, Amanda Grossman, just quit and let the song end without seeing her idea through all the way.

When it comes to specific tracks on this album, Green Man was simply fantastic. What a great and natural choice to lead off the album. The arrangement was fantastic and the harmonies very energizing. I don't know the original, but I'm glad I heard this version first.

I didn't care much for the last four tracks on the album. Jesse's Girl was square and boring. The Billie Jean/Smooth Criminal mix was good, well ... good until Smooth Criminal started. Adeoye Mabogunje was killer with his falsetto on Billie Jean, but Johnny Perez wasn't even on the same playing field with Smooth Criminal. Smooth Criminal is one of those songs that would be AMAZING if performed well by an a cappella group, but it's HORRID when it's not performed well. This interpretation was too white, too slow, and too ugh for this reviewer.

Soloists came and went across the project. Nobody really shined, but many were good. I enjoyed Samir Warty on Date Rape, Eryn Karpinski on This Woman's Work, and Hannah Berson on Tempted. I was disappointed to hear Jenny Carleton-Nathan try to emulate Britney Spears on Oops! Bad Touch instead of just singing like herself.

This is a solid album. A lot of good things happening, but still a lot of room for improvement. Don't be surprised if you hear good things out of this group in the future.

I will paraphrase an old review of mine and say that I don't dislike simple arrangements, but I do need the performance to be tight, strong, and round for me to really get into one. The University of Chicago's Voices In Your Head get much closer to the mark than the original target of that comment. With their second CD, On Point, VIYH sticks to standard and simple arrangements (with a few twists), but performs confidently on a great selection of covers ranging from XTC to Sublime.

The CD begins with XTC's Green Man, which is a simple and bold tune that adds harmony slowly throughout the song, moving from the backbone to an entrancing full chord as the track progresses. It works well as an opener for them. It caught my attention immediately, not because of anything flashy but because of the neat song choice and strong performance.

The simplicity has its pros and cons. For example, Megamix (which introduces and then layers Real Life's Send Me an Angel, Madonna's Like a Prayer, and U2's Beautiful Day) relies on a simple block, which allows it to subtly shift from tune to tune, and then becomes the perfect backdrop for the hypnotic layering of all three. The arrangement leaves room for stellar percussion and intertwining of solo lines. The Bloodhound Gang/Britney composite Oops! Bad Touch and the Michael Jackson tag-team try to capitalize on this, too, but the bodies of these tracks are less successful.

The simplicity hurts them when the song is asking, no, begging for more. Kryptonite might be the best-sounding track on the disc, with tight tuning and an awesome solo from Jacob Shreckengost (one of the standout soloists of the disc), but I can guarantee that this track would greatly benefit from an arrangement that consists of more than straight-up quarter notes for the entire chorus.

Beyond the atypical and edgy song choices, VIYH has a couple other special strengths. The sopranos frequently hang out in the stratosphere, but do so lightly and accurately, adding a nice ethereal lining to the group's sound. This Woman's Work is all set to capitalize fully on this forte, but the tuning is unfortunately a bit muddy. The percussion is also well performed and produced consistently on the disc; it grooves, drives, and supports appropriately. That skill is to the credit of Kwabena Holder (according to the group's website, though he is not credited in the liner notes), and the production to Freddie Feldman (VP guy and former RARBer), the disc's engineer.

I'd like to hear VIYH step up their general energy and groove (they often sound too straight and clean), and push their arrangements to a more engaging level. But in the meantime, they're making good music and having fun. Sounds good!

Every Thanksgiving my family and I would go around the corner to Great-uncle Morty's house for dinner and football. One year, Uncle Morty got a huge projection TV that my dad and his cousins were dying to watch the big game on. After dinner we gathered around the goliath set to start the big game, when all of a sudden Morty's grandson threw a ball in the house and smashed in the screen. The men were forced to watch on the minuscule 27" television in the guest room.

Listening to Voices in Your Head's first album, On Point is something like how my dad might have felt after watching football on the smaller set. The game itself is exactly the same, but after weeks of excitement, it was rather disappointing to have to see it in that way: pixellated, no surround sound, and with 10 men crowded in a room designed for 6. Likewise, the introductions to the songs on On Point set the listener up for a good track, but rarely fulfill their promise of a strong sound, expressive solos, and complex arrangements. You're listening to the same music, but it's nowhere near as energetic, complex, or perfect as you know it could be.

Although production quality is excellent, the album overall reneges on the promises made by the opening bars of most of the songs. Vocal percussion, performed (I assume) by Kwabena Holder (only the VIYH website attributes voice parts to group members), holds most of the songs together with an advanced beat more complex and sophisticated than the arrangements. Sexual Healing is an excellent example. Vocal parts are rather simple and do blend well. Although pretty, however, the arrangements are uncomplicated and force the singers into a somewhat choral sound that is appropriate to some of the songs, like This Woman's Work. Soloists are bland and often off-pitch. Leads should experiment with finding their own voice instead of emulating the original artists' recognizable style and intonation. Regardless, the album presents a fair compilation of pop and rock songs, even if they are standard collegiate a cappella fare.

There are features that deserve recognition. Hannah Berson and Eryn Karpinski present a clean lead in Rockapella's version of Squeeze's Tempted. Each deserves her own solo; most of the songs, if not all of them, break the main vocal line into two or more parts. Kryptonite's Jacob Shreckengost also does justice to the vocals of Three Doors Down's Brad Arnold, but its arrangement misses the mark by creating an almost folk sound with its choral harmonics in the background. Jacob also performs admirably in Bad Touch.

Two more points of interest: The three medleys/mixes on the album come out like those bad 1-800-Call-ATT commercials where Carrot Top interrupts what seems like a real TV show. Transitions are sloppy and noticeable, and while Billie Jean and Smooth Criminal are both Michael Jackson songs, they have no reason to be in the same piece. The insertion of Britney's Oops! (I Did It Again) into the Bloodhound Gang's Bad Touch disrupts the rhythm and doesn't quite match the energy of the latter. Oops! may be aptly named because of the timing and vocal issues presented in that portion. Similarly, the layering of the lead lines of Send Me an Angel, Like a Prayer, and Beautiful Day at the end of Vocal Point's Megamix was unnecessary and overly complex.

Finally, I think it's important to note the extremely poor selection of Sublime's Date Rape as a piece to perform for collegiate a cappella. Given the liberal and feminist-minded environment of many college campuses these days, I cannot imagine this song about a man picking up a woman at a bar, raping her, and getting avenged by being anally raped in jail received any kind of positive reception at the University of Chicago. I'm personally disappointed in VIYH's decision to arrange and record the song.

Not having heard any recorded collegiate a cappella before, my Uncle Morty might really enjoy this album. Like watching the 27" TV, it's great when you have nothing to compare it to. But when you know that there's a projection set that's unavailable, you're left wanting slightly more, even though the set you're watching now does just fine. VIYH's On Point is brimming with possibilities that are never quite reached.

For ordering information, see Voices In Your Head's web site.