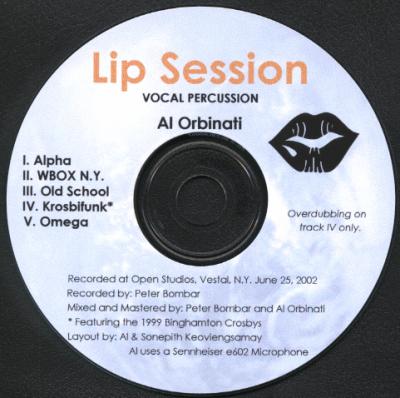 Vanity projects are much more fun to obsess over when you're involved in their making. Every second of material matters; every detail has the potential for a purpose. Every choice brings on contemplation, then decision, followed by satisfaction in this latest detail. Careful listeners, you are sure, will applaud your careful craftsmanship! Or alternatively, careful listeners will recognize that even if one or two details didn't turn out the way you wanted, there are other, more important details that show your true talents.

This recording shows that Al Orbinati is a reasonably talented guy, and that he doesn't have the faintest idea what a listener is going to want out of this album. As a personal achievement, this project is something to be proud of. As a publicly available CD, it's a disaster.

There are five full tracks on this CD, which guarantees its failure as a demo. Prospective employers — either bands or industrial music producers — are not going to sit through the four minutes and 58 seconds of track 1 to tease out DJ Nati's dozen tricks. Short, 10- to 30-second tracks would have been a much better idea and made it easier to browse. Track three at least has enough stability that it might work in ambient music as part of a minimalistic techno track. But it's still just one idea that goes on far too long. Closing the disc out is an innocuous track five, but it doesn't hold anything to justify sticking it out to the end.

The idea behind long tracks is to impress with endurance and stamina. But when DJ Nati goes on and on in the same vein, I don't get impressed, I get antsy. His percussion lines don't groove enough to use for aerobics class, and they don't have the pyrotechnics of a drum solo from Rush or even The House Jacks. When you put Orbinati in the background, he sounds proficient enough (see track four with the breath-of-fresh-air Binghamton Crosbys). But this guy is clearly an anchor, not a frontman.

In closing, I feel duty-bound to report on Track 2. A spoken word number, it represents 20% of the album and ought to be described, even if it cannot be appreciated. It is beyond dreadful. Al pretends to be a radio station host, interviewing "Al", which is Al on a cell phone. Spare us, please.

Al Orbinati's Lip Session showcases multiple tracks of what might appear to be a really cool party trick to the uninitiated, but will come across as some truly impressive vocal percussion to his a cappella brethren. A former member of the SUNY-Binghamton Crosbys, Orbinati has produced a short and sweet demo of his talent. More a sampler than a full CD, Lip Session gives you only three actual percussion tracks; WBOX N.Y. is a fake appearance on an a cappella radio show, and Krosbifunk is a so-so R&B medley from his former group. The latter is a rather mediocre track where lackluster singing distracts from what Al does best, so stick with the bookend tracks Alpha and Omega, where he truly shines.

This is not the CD for those who claim that dance music all sounds the same. But enjoying Orbinati's beats is also not only for percussion fanatics. I initially worried about how a percussion track could keep my attention for more than thirty seconds. And yet, I caught myself tapping my foot unconsciously, impressed by his varying tempos and sounds.

It is hard to recommend this disc with total enthusiasm, given its length and specialized nature; I can't see myself popping the album in my stereo again any time soon. That being said, I don't know how many more tracks Al could have included without losing the listener's attention. Next time around, I'd love to see this guy use his skills and really push forward creatively. For instance, it would be great to hear him play with vocals more and come up with some club remix-style tracks using his beats. But in the meantime, I second the remarks of the recording engineer near the end of Alpha: "You're f*#?$& great, man!".

In what is the first vocal percussion album to be reviewed by RARB, Al Orbinati (a.k.a. DJ Nati) is out to make a name for himself. The work he has done on Lip Session will do just that.

The album blurs the boundary between mouth drumming and beatboxing. DJ Nati has excellent beatbox skills — great patterns, good tempos, nice rhythms and good use of circular breathing. Maybe because he considers himself a beatboxer, DJ Nati's drumming skills aren't as well developed, always relying on the same snare and cymbal sounds to connect his beatbox grooves. It's okay for someone just starting out, but he's going to have to widen his drumming palette and diverge from the basic "bm-tsk-tsk" if he's really "raising the bar on vocal percussion" as he states during his fake interview on track 2, WBOX N.Y..

The four "songs" on Lip Session are a bit hit-or-miss. Alpha starts the disc off right. It hooks you in, is rhythmically challenging, and showcases his spitting technique. Man, he's got a fast tongue. Near the end, someone else in the studio (an engineer maybe?) tells DJ Nati that he's really good. I'd have to agree. The drastic pattern change after the break sounds like one long improv.

Track 3, Old School, is even better. It begins with a nice low buzz and incorporates some Fat Boys-inspired breathing and early scratching licks. There have been three groups that have made me literally get off my ass and dance: Stanford Everyday People, Toxic Audio, and Duwende. I now have to add Old School to the mix. The sample "song #2 rollin'" laid a nice top layer to this groove.

The same can't be said for tracks 4 and 5. Krosbifunk features the 1999 Binghamton Crosbys, much to the detriment of the track. They don't sound like the Crosbys from the 2001 ICCA finals, which proves how much a group can change from year to year. DJ Nati plays it safe on the vp, showing his aforementioned noviceness. He's solid, just uninspired. As the only overdubbed track, the uneven mix, bad song execution and mid-phrase tempo changes make it hard to determine who's at fault. The group leads his drumming instead of letting him drive the song. The mundane beatbox solo doesn't help the cause.

Omega is no way to end the CD. After the brilliance of Alpha and Old School, it seems like he's run out of ideas. Instead of literally ending with a bang, the CD peters out.

If you admire Justin Timberlake's beatbox, you'll definitely enjoy DJ Nati's style and percussive skills. He's better. If he develops his bass singing, he could become a threatening combo artist. Some R&B group should sign this guy quickly, and help him become great.

Ordering information can be found on DJ Nati's web site.