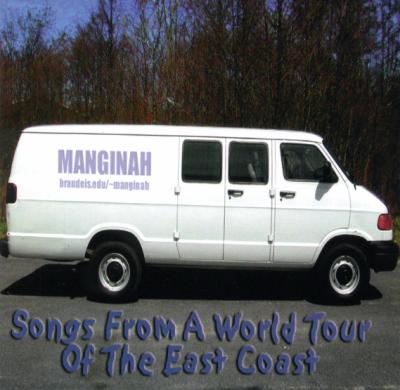 This is a cool album, at least as much for what it is as for how it sounds. There's something endearing about students from an American college singing Western pop music in Hebrew. Contemporary Jewish music actually works pretty well a cappella, despite my initial skepticism toward the wisdom of adding vocal percussion to this tradition.

As to how it sounds? It sounds fine. The details are a little sketchy in places, and this album won't win any tuning awards. But it's got a pleasant timbre, and that's far better than the alternatives of screaming, overweening pretension or just plain grating voices. Better production could have helped. The solos are too far back in the mix on almost every track, and the balance rarely gels.

On the upside, there are some nice fuzzy voices at work, along with good quality vocal percussion and well-considered arrangements. I can't comment on the strength of the Hebrew adaptations, because I understand only about three words of that language. But the English spoofs are pretty good. Lex Friedman's new words to Spam, a second-generation parody of REM's Stand, are at least as funny as Adam Sandler's well-known Chanukah song. Every Purim, based on Sugar Ray's Every Morning isn't too bad either, and it's a lot more successful than your average collegiate rewrite.

If you know the group, you'll enjoy listening to this album, especially because I bet they are good performers. This is also a good choice for Jewish educator types. It sounds plenty nice to play for middle school and high school kids looking for a way to connect with their heritage and have a good time doing it. It might even spur some imitations, and I'm in favor of anything that gets kids singing. It's not quite strong enough for a mass audience, but it does a good job covering some relatively untrodden ground. That's something Manginah can be proud of.

With the ever-increasing number of a cappella groups, we will begin to see more and more niche groups, like Brandeis University's Manginah. Manginah is a Jewish a cappella group, but even some of us peripheral people can enjoy.

According to group contact Adam Shain, this was the first time in a recording studio for many of the members. As we all know, that can create a lot of anxiety. Anxiety while performing music leads to many foibles. For Manginah it apparently led to two significant problems: synchronization between parts, and loss of tonal center (flat or sharp). On every cut, one or both of these characteristics showed up in ways that the musical effort by the group could not overcome.

Inexperience appears to have led to two other problems. Groups can overcome basic singing problems by pouring energy into a song. Dynamic contrast is one way of infusing a song with energy, but on a 0-100 scale, Manginah sang in a dynamic range of 40-60. They missed the opportunity to use all the gradients between loud louds and soft softs.

The best examples of where Manginah failed to make music are cuts 5 and 6. Manginah just sings the words and notes as they've always been sung. As a musician, your creativity demands that you take a note and do something with it. Make it louder or softer. Increase or decrease the tempo. Somehow change the intensity. Manginah has the talent to do these things. Yet on this platter they did not. I'm sure they will on their next CD.

The two satire songs were the CD's highlights. In The Shabbos Song, Manginah used The Muppet Show Theme as the melodic line to tell the story of Shabbos. On cut 12, they cover Adam Sandler's The Chanukah Song. It's done very nicely, with a smile. Manginah told the stories, and as a listener I enjoyed them. My wife had to ask why I was laughing so hard.

One interesting song combined many popular melodies from songs we've all heard. The last cut is Adon Olam. It is the last prayer of the Jewish service. Manginah meshed the words of the final prayer into Pachelbel's Canon, Stairway to Heaven, Grease, and Louie, Louie. It is quite a departure from the rest of the disc.

Once again, the best news about this CD is that every problem I identified is fixable, and Manginah has the talent to sing at a much higher level.

Songs From a World Tour of the East Coast isn't an album so much as a collection of Jewish-related music. According to the group, the album includes prayers and music from Jewish liturgy, Israeli pop songs, and parodies of American pop tunes. A statement this album is not. Of course, I may be missing something since I'm not Jewish, and I don't speak Hebrew.

Though I've never heard the synagogue versions of the traditional songs or the radio versions of the Israeli pop, every arrangement had something new and interesting to offer. The arrangements were creative, active, lush and fresh. You've never heard a more inventive use of vocal percussion than when it's laying down the beat behind the Hebrew for "David, King of Israel, lives forever".

Manginah's goofy sense of humor was largely lost on me. Tunes like Spam (a parody of Weird Al's parody of REM's Stand) and Every Purim (a cover of Sugar Ray's Every Morning) are so chock full of Judaic inside jokes, Hebrew and references to the Torah that I spent half the time either scratching my head or asking my Jewish fiancée things like "What's a keepah and why would it keep out the gareepa?". Manginah sings about the Sabbath to the tune of The Muppet Show Theme and later forces the traditional Hebrew prayer Adon Olam into a medley of melodies ranging from the Backstreet Boys to the Beach Boys. Interesting, yes, but I didn't get it.

Musically, the group has some problems. The group's pitch is rarely dead on, and individual background singers and soloists are sometimes obviously off key. The group's blend can be good, but it's inconsistent. The group needs heavy work on phrasing around the beat. Most of the soloists deliver phrases that are significantly off the beat, and the background is sometimes so off tempo that the effect is actually disorienting (Spam). Liberally applied reverb helps give the group a full, lush sound, but it also prolongs many sloppy cutoffs. I enjoyed the strident, clear tones of the soloist on Keren Or. Otherwise, Manginah's soloists were mostly uninflected, tentative, and not outstanding. I sometimes wondered if the soloists understood the meaning and emotions behind the Hebrew they were singing.

Somehow, through all the rhythm problems, the basses and vocal percussionist stand out. The basses have good presence, some cool riffs, and potential. Manginah's vocal percussionist is talented. Lex's sounds are consistent and on the beat, and he lays down some funky percussion that, believe it or not, complements even traditional Hebrew. For very smooth VP tempo changes and a smorgasbord of jams, check out Adon Olam.

The variety offered here keeps the album interesting and unique, varying from traditional songs to goofy covers. I've never heard anything like it, and maybe that's why I feel like I missed something.