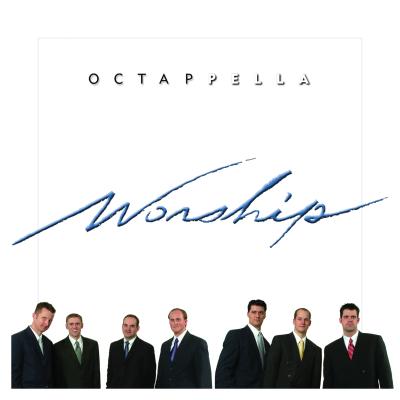 Great music continues to come out of the rich performance tradition in Utah, but some groups give us too much of a good thing. Such is the case with Octappella, a septet — let's go out on a limb and a say that G-d must be the eighth member — of fantastic singers and gifted musicians. Like a combination of Il Divo and GLAD poured into the boy band mold. Their latest album Worship clocks in at more than an hour's worth of recording time and features 17 tracks, which after about the thirtieth minute made me think that I had hit the repeat button on my iPod.

Matt Cropper arranges for the group with occasional help from outside collaborators. His originals, Look to God and Live, Anthem to Our King and Gloria hold up well against the covers. The most moving is Anthem which features Mindy Gledhill as soprano soloist. Lilting, romantic and just gorgeous. I wish I could give accolades to the other singers. But accept for a list of names in the notes, there is no indication of who's singing which songs. I do wish bands would remember that not everyone has been to their concerts and know who's singing lead at which time.

According the liner notes and the website, the album is a more accurate representation of the group's purpose and mission providing a sounding board for "the belief in and appreciation for uplifting principles". That's a tall order for songs that have a great propensity for creating a lush soundscape more suitable to quiet introspection and spiritual reflection than a campfire jamboree. If you want energetic and uplifting music, I would suggest listening to Martin Carbow or Apes&Babes.

But if you want to hear some soothing a cappella delivered with dulcet tones, then try this album. Except for a few clunky notes here and there and some buzzing vocal coloring at times, this is a solid recording and very captivating if a bit repetitive. For Always and Look to God and Live put a tickle in my throat. The production and delivery of the songs reminds me of a cleaner version of songs from the musical "Alter Boyz" — extremely theatrical without the sense of irony or double entendre. Priceless.

Worship is definitely a niche recording. If praise and worship is your niche (plus a dose of patriotism) then this is a CD for you. If not, check out the clips online and decide from there.

The aptly named all male eight member Octappella adds to their canon of recorded music with the full length Worship. While it offers some hints at musicality, it ultimately proves to be powerful neither as an a cappella nor a worship album.

Octappella sounds to me like a mix between a poorer version of the Kings Singers and those most generically cheesified of arrangers, Sally and Jay Althouse, then run through a mix designed to take any life out of the vocal lines. The result is a conglomeration of sixty minutes of monotony that, while technically well sung, offers no real reason to listen.

Arrangements are simple and the same throughout. Lots of "oo"s and "ah"s, lots of sequenced arppegiation, lots of lush chords growing out of stark unisons. They seem to be almost trying too hard to achieve some level of the sublime that I just can't take it that seriously. The same goes for the backing tracks that are devoid of any emotion at all. Already at a disadvantage with repetitive arrangements, a lack of dynamics adds to the problem. The worst is the mixing however, completely stripped of any impurity and sounding like synthesizer produced tones.

This especially doesn't work for Octappella's subject matter, which is religious in nature. With lyrics breaching such weighty topics as a higher power, it just seems too stripped of anything approaching feeling and too monotonous to make any impact. There is nothing divine in the sound.

There are some redeeming qualities of Worship. Solo lines are given a little more freedom from constraining auto-tune and do much better than the backgrounds. And for all their lack of nuance, the backgrounds have excellent blend, unity, cohesion and tuning. They're just not that interesting. It is ironic to note that the true standout on this album is the only track with instrumentals, Be Still My Soul, which rings with truth and emotion.

In the end Octappella went with sterility over sentiment, doing a disservice to their listener and their inspiration.

The first thing that popped into my head was wow. That's lush.

These seven guys (originally eight) blend together richly. However, there are occasionally slight lapses in technique throughout the album that prevent me from giving a 5, though a 4+ or 5- would be appropriate. Octappella is strongest as a group and likes to flex that muscle as evidenced by seventeen tracks of rich, spiritual overtones. (That was a nice double entendre if I do say so myself.)

Worship takes the more traditional choral route as far as orchestration goes but oozes with contemporary harmonies that keep the listener engaged even (GASP) without any vocal percussion. The abundant variation in each track helps to alleviate the quasi-sameness of Worship. Don't get me wrong, the music is fine and the guys do a good job of offering their message without being overbearing, but the energy of each track is the same kind of joyful over and over again. Judging by some of the lyrics I would think that some parts should sound sadder and more grievous, but every note sounds like it's being sung through a smile. Octappella obviously loves what they're doing, and that comes out in their music, which may or not be a good thing depending on the context.

Anthem To My King is arguably the strongest track on Worship. The addition of guest singer Mindy Gledhill gives a subtle touch to the guys already rich texture that just makes everything glow.

Some people who passed me listening to Worship commented on the "pretty Christmas music" and, indeed, it does have that calming and joyous feeling that the season brings. In fact, this hour long album is perfectly suited for that use. However, I'm not sure that Octappella intended to produce a holiday album but rather a musical testament to their beliefs that could stand on its own without the aid of snow, egg nog and the jolly fat man in red. If Octappella chose eight or nine songs instead of sixteen and a bonus track with a piano, the album wouldn't have the residual feeling of a seasonal soundtrack. It would also help the memorability of Worship. After listening to it for a few weeks, the only two things that really stick out in my mind are the opening ostinato of Come Come Ye Saints and the reinterpreted hook of My Country 'Tis of Thee.

Overall, the Worship is pretty good stuff. A little long for straight listen through, but it does provide a good selection for the God mix on your iPod.