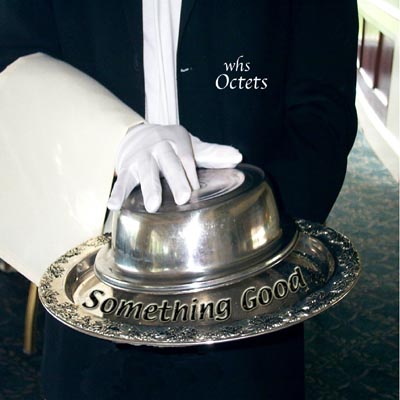 Something Good collects nineteen (!) tracks from the WHS Octets, a co-ed group from Winchester HIGH SCHOOL (!!). This disc has ambition and energy written all over it. All in all, it is a very mixed bag in terms of musicality, ultimately let down by the recording.

I have a hunch that the Octets are better in person than the disc lets on, more in tune and fun to watch. The recording is to blame for the album's dissatisfying sound, as it sounds high, tinny, and enclosed. The sound destroys the atmosphere for many songs, atmosphere I am sure the singers are doing their darnedest to create. Some apparent problems in rhythm may also be due to the recording, in which bass notes are just about bled away. While I was not possessed of exceedingly low notes during high school, they can exist...just not on this album. Percussion is also often lost, with only cymbals and upbeat breathing coming through. A great exception is Killing Me Softly — Mr. Myers' percussion is right on.

On the other hand, the singers themselves are not perfect, either. As is perhaps to be expected, most problems come from the soloists, who are frequently off-key and even more often just out of their depth (or range); Satellite and Mess are two examples. The backing singers also flicker in and out, sometimes missing notes entirely. This is especially true of the higher voices (for example, on Least Complicated), a shame given the top-heavy sound of the disc. One surprise is the group's inability to blend even on homophonic numbers. On New Day and Someone to Watch over Me, the higher voices again cannot seem to match the rest. The Octets are also often uncertain about rhythm. Everything You Want features dueling baritones...but not in a good way; Only Time has no groove.

The group gets kudos for attempting some difficult material, but often their ambition (and the arrangements) outstrips their abilities. Don't Give Up (like a lot of Peter Gabriel's work) is rhythmically very complex and demanding on both the lead and counter; Your Move, with its shining '80s harmonies (and high notes!), stumps the singers.

One real highlight is Killing Me Softly, but despite a good start and (at last!) decent engineering, it soon falters. I kept waiting for a more choral bridge or chorus. The track does feature good balance, good percussion, and a fun approach — the Octets near their best.

All told, an energetic but inconsistent album that probably does a fairly good group less than absolute justice. Undoubtedly, we'll be hearing from members of the Octets again. I can recommend this disc for purchase only to the most die-hard a cappella enthusiast.

It's heartbreaking to contemplate how much better this album could have been if it were about twelve songs long. Granted, by "much better" I mean around a 3, which is basically as good as I've ever heard a high school group go. As it is, though, numerous lovely solos (from Marina Stakes, Lisa Dacey, and Andrea Ellwood, among others) share space with awkward, pubescent efforts, and some decent block work (I Can't Make You Love Me; Don't Give Up; I'm Beginning to See the Light) alternates with backgrounds that are just unlistenable. This contrast turns up within songs, too; almost every song that I graded highly has a chaotic chord or two, while many of the worst songs have their moments. The result is that the songs feel a lot longer than they are, which is never a good sign.

Tuning is the group's biggest trouble area, with blend and rhythmic unity tying for second place. The group does a lot better with choral blocks than with pop backgrounds. Overall, the sound is muddy and sour. With 22 voices, I suspect some of the less experienced singers may be pulling the chords out of whack. Maybe instead of splitting into male and female lineups for certain songs, the group could divide into varsity and JV troupes on a tough number or two? This would allow the stronger singers to fine-tune their skills, while still giving the newbies a chance to get their feet wet.

The Octets also desperately need some better production on their next album. So many issues — young basses struggling to get their low notes out, not-quite-there chords, sloppy edges on solos — can be minimized with careful editing and studio manipulation. Most of the tracks here just sound raw.

The fact that these kids can handle some jazz chords suggests that the real problem isn't a lack of talent. Rather, I suspect the kids are getting carried away with that I'm-a-rock-star feeling when they cover Dave Matthews or the Chili Peppers, and they just aren't putting their ears to work the way they would on a choral piece. Octets, it's great that you're having such a good time, but a CD won't let you get away with cracking on the high note or running out of breath at the end of the phrase. Singing pop well is both a total blast and a ton of hard work.

As always, I'm thrilled to see young singers get the opportunity to learn and enjoy a cappella in high school. I hope the Octets will bear in mind that RARB's job is to compare their work to the body of available recordings — much of which is professional — not just to other high school groups. This is a CD for the Octets' moms, not for nitpicky RARBers. I'm sure its intended audience treasures it more dearly than any ten faultless pro albums RARB could recommend.

Who should buy this disc? Friends and relatives of the performers, students at WHS, supporters of the WHS music program, and the occasional high school music educator. It's not for the casual listener or the a cappella geek. The album sounds like a collection of regular high school singers, but the dedication and commitment of the students (and educator) far outshine anything that might be considered average for the high school music experience.

Students not only perform each of the songs, they've arranged most of them as well. The arrangements and the performances aren't going to knock anyone's socks off; this is essentially a live CD. But when I say the singing and arranging is average for the high school student, I mean that the skill and age levels are appropriately matched. It must be considered that the Octets have abilities of which many of their contemporaries only dream. The difference is that the young men and women at WHS have the opportunity to participate in ensembles and classes that give them musical skills every high school student should have. I hope they realize how lucky they are.

You'll hear 19 tracks that exemplify the high school age vocal experience. Female voices just discovering resonance, finding that awkward spot between a belting range and ringing head voice. Male voices that are uncertain and awkwardly stuck in the range of a limited baritone. These aren't knocks; they're obstacles in the lives of real high school singers. You won't find a Christina-like phenom or any vocal gymnastics on this recording. But you will find a group of young singers who have obviously invested an incredible amount of time and effort into producing a more-than-full-length recording of their year's work.

The Octets certainly have ambition; they've tackled a project that would strain most collegiate groups. The real value in this endeavor lies not so much in the end product as in the process. This recording reflects a public school music department that emphasizes the doing of music: performance, arranging, composing, and theory. It's a wonderful sight to behold. So while I won't recommend this recording to the general public, I can only hope that more high school students are offered the same wonderful opportunities. Lynne Rahmeier's students should be thankful for the chance to learn from her and the music department at WHS, but most of all, they should be proud.