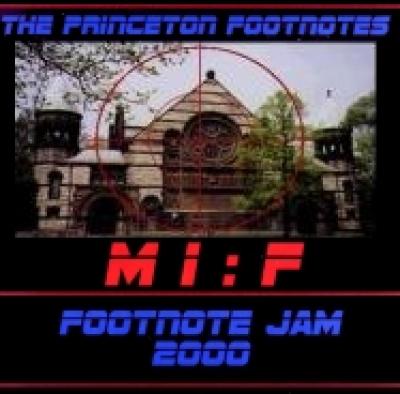 I am not a promoter of the near-universal trend toward complicated arrangements, percussion-driven modern rock repertoire, and heavy electronic production in collegiate a cappella. Innovation is one path toward excellence; the meticulous preservation of an extraordinary tradition is another, and just as worthy of praise.

It's evident that The Footnotes have good ears, decent pipes, plenty of experience, excellent dynamic control, lovely blend on glee-style arrangements, and a subtle understanding of their American-standards repertoire. But they are taken to the woodshed by the crappy recording system in Richardson Auditorium at Princeton. I mean, even the Rolling Stones don't always sound great on some bootleg Internet feed, and that's basically what you're getting here. Why do consumptives always feel the need to congregate in concert halls? The bronchial attacks in the opening and closing chords of That Lonesome Road are so ingeniously timed to blast at exactly the wrong moments, they sound like a deliberate plot by rejected auditionees to sabotage the concert. I'd like to use this review space to talk about The Footnotes' ease with difficult jazz chords and the potential for improvement in their throaty tenor sound. Instead, I have to keep coming back to the deafening crowd noise, parts fading in and out, clomping feet during choreo numbers, occasional flubs, and (worst of all) visual jokes that provide CD listeners with distracting laughter but no laughs...

Footnote Jam doesn't make sense as a purchase unless you're buying it from your boyfriend.

We have a little bit of this and a whole lot of that on this live concert album by The Princeton Footnotes. The little of "this" is the goodness captured in the great energy of a live performance. The whole lot of "that" is the badness stemming from pitch problems, spotty sound production, balance issues, excessive hall noise...the list could go on and on.

Footnote Jam 2000 is the definition of a "yearbook" album, and only the audience members at the concert would likely care to have a copy. There are bursts of better-than-average (while not exactly brilliant) highlights on the album, but more often than not, unless you were there, you won't find any strong enough tracks to merit buying the album.

The Footnotes have a talent for both comedic flair and compelling passion in their music. Their repertoire offers an interesting mix of old school standards with an occasional foray into contemporary hits. Bridge Over Troubled Water is a heartfelt rendition of the Simon and Garfunkel classic, and the thirty-year-old song sounds more relevant than ever. Kiss keeps the Prince swagger right in the forefront, and I like that. Really, I do. Unfortunately, even when strong musicality is evidenced by the group (as in Bridge), the album is hampered by awkward arrangements, ineffectual and timid soloists (except Phil Blodgett, Chas Prasad and Michael Gibney), and sound technicians who often fall asleep with their hands on the recording volume knob.

At times I thought there was more than one group performing. A song that was almost pitch-perfect and rhythmically cohesive was followed by barely audible dreck or atonal screaming matches which rattled my bedroom windows. How could the same group sound so different within minutes?

The audience definitely hampered the recording process as well. The better tracks were the stronger songs and those songs were more appreciated by the audience who would clap and scream, covering up most of the song. It was a supremely bad cycle.

The one savior of this disc was the inclusion of All I Ask For Is You, a Footnote original written in 1965 and sung with Footnote alumni at the end of the concert. Ernest D.B. Pittman from the class of 1971 sings the solo on this version of their "group" song. The man has pipes! But what is most special about the song is that it makes me tear up with nostalgia to think that an alumnus from 29 years ago would not only attend the concert, but would be willing to perform with the group. Truly amazing. I hope I have that opportunity in 2033.

The Princeton Footnotes have released a live album that sounds like it was recorded with two ambient microphones placed out in the audience. As a result, the sound quality and balance isn't great. Unfortunately, the technology accessible to most collegiate a cappella groups is limited in this way. I'll never know whether this technique accurately preserved the sound of the space and what it felt like to be in the audience. And unless you were at the concert, neither will you.

The arrangements are adequate, though despite the claims in the liner notes, many of the arrangements are not original to the members of the group and its alumni. (Up the Ladder to the Roof, Bridge Over Troubled Water, That Lonesome Road, Heavenly Bodies, Kiss Him Goodbye, and others.)

In a curious twist, The Footnotes actually sound better doing their jazz-influenced repertoire than their popular material. Most collegiate groups are the other way around. Some of the best ensemble singing crops up on the slower-tempo, softly sung jazz tunes like Night and Day. When the group hunkers down and really gets to singing musically, without worrying about entertaining, they sound quite good. For this reason I'm looking forward to reviewing their studio album Purple Tides.

As a concert, the album is a little haggard. Transitions are somewhat awkward between the different styles the group has chosen. Come Go With Me and Heavenly Bodies, in particular, interrupt the flow. The Footnotes change from being Nylons copycats to hip jazz cats, from street corner doo-wop guys to glee club gentlemen, with the occasional pop maven thrown in. In a live performance setting it may not be so noticeable, but on a CD, I find it distracting.

Boogie Down is a favorite track largely due to the balls-out (there's no other way to put it) solo efforts of Phil Blodgett. Mr. Blodgett also opens up a can of Whoop-ass and saves the corny and tired Kiss Him Goodbye. Prince's Kiss actually starts off with the right groove and a nice solo by Mr. Andrew Gibney, but later falls into a square, plain old rock beat.

Ultimately, I can't recommend this CD to the general public or a cappella geeks. It belongs in the hands of the members of The Footnotes, their families and friends, and whatever hardcore supporters they have. If you want a true, live Footnotes experience, just go see them in concert.

Please send $15 per CD, plus $5 per order for shipping and handling to: