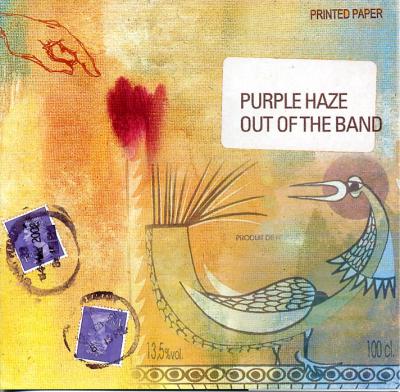 Out of the Band, the latest release from Northwestern's hardworking Purple Haze, is an enjoyable album from beginning to end.

The disc has a clean sound, for the most part lacking the octavization so prevalent these days, and is thus reminiscent of collegiate a cappella from the early '90s (cf. Stanford Mixed Company's Unanimous). At the same time, it is not without its modern advantages. Multitracking is the rule, and the mix is well balanced; the songs are all recorded better than anything was a decade ago.

Aiding the clean sound are the arrangements, crisp and spare, apparently subscribing to the dictum that less is more. The result is elegant, letting the voices speak for themselves, letting the lyrics come through, letting the group achieve an easy balance. Rarely these days does one have a chance to enjoy the timbre of individual voices that are distinct but still well blended; Out of the Band affords that pleasure.

There are some standouts. Elevation rides a driving energy. Fallin' is even better, with a more confident soloist and helpful percussion; the arpeggiated backing voices never falter. And Still Fighting It is a wonder, less like a cappella than simply music; Mr. Mike Mahler does Mr. Ben Folds one better.

Some tracks are marginally less successful. Barrel of a Gun sounds a bit less like Guster than like They Might Be Giants; intonation, especially in the lead, edges the song unintentionally close to comedy. This Woman's Work is at first too bright, too top-heavy; once the rhythm section arrives, the song locks more into place, with deft engineering. But the overall result is less convincing emotionally than the version included on the original BOCA (by The Tufts Jackson Jills).

All told, a great album from an increasingly great group.

Purple Haze has taken a step forward with this CD, particularly when it comes to soloists. On their last album, Hooray for Everything, star soloist Erika DeShay stood out from the crowd. This time around, her soulful sister Rachel is just one of several stunners, each with a distinctive style. Jamie Howe's youthful, free soprano is just right for a Michelle Branch cover; Jocelyn Levin has fantastic range and control on Emotion; Matt Pearson absolutely tears it up on U Got It Bad. Mike Mahler more than makes up for his rather stiff Elevation with a sensitive turn on Still Fighting It.

The reason I don't love this album is that it has too many moments that sound, well, sterile. The production is thorough and proficient, resulting in a very smooth and technically accurate sound. This electronic sound, perfect for pop cuts like Emotion, drains the life out of slower, folky songs. Go Rest High, a teary memorial hymn, cries out for heartfelt human voices, yet ends with a cold "oo" chord that might as well be a studio musician pressing a few keys on the synthesizer. The block performances on the Natalie Imbruglia and James Taylor covers are equally straightforward and soulless. Maybe the background singers were pouring their hearts out in the studio; if so, that subtle magic somehow got lost in the machine.

Repertoire could use a little work, too. On the one hand, Purple Haze wins a lot of points for selling me on songs I've never liked, such as U Got It Bad. On the other hand, many of these songs have been definitively (and famously) recorded by other collegiate groups, and Purple Haze doesn't do anything different with them. It's fine to cover Criminal, This Woman's Work, etc., as long as you find something unique and distinctive to say about those songs. Instead, these versions are solid retreads.

Despite these flaws, Out of the Band is an unusually well crafted college pop CD, much stronger than the typical offering. I can't give it a 5, but I can let Purple Haze know they've got one more fan in Chicago.

Purple Haze's new album, Out of the Band, opens with the song Elevation by U2, in which the following lyrics are sung: "Can't sing, but I got soul". The crux of the problem of this album can be summed up as the opposite of this quote.

Purple Haze's pitch and blending are near perfect. While certainly there are notes that don't mesh 100%, I couldn't find a single out of tune note or chord in the entirety of the CD, and believe me, I was listening. Blend is equally good, with no individual voices sticking out, and fairly consistent sound from most parts. Production is simple but effective. This group obviously has very well trained singers and is grounded in classical music; the pyramid effect in mixing is evident throughout.

Great, right? This quality creates problems, though. While the sound of the group is perfectly adequate for traditional teen-angst tunes from Ben Fold's Five, Natalie Imbruglia, or Maxwell, it leaves much to be desired for less inhibited tunes from Destiny's Child, Usher, U2, or James Taylor. There is really no change, in intensity, emotion, style, timbre, production, or anything else between, for instance, Everywhere and U Got it Bad, or Go Rest High and Fallin'. The group's classical roots and impeccable tuning are again evident in Emotion, where the classical vowels in the backing vocals are completely inconsistent with the style of the original. The group gets almost there in Barrel of a Gun; the opening, especially from the guys, is gritty, released, and fun sounding. However, this quickly retreats into a controlled boringness typical of their upbeat tracks by the chorus.

Soloists generally just aren't that great either, and some (Mike Mahler, Rachel DeShay) manage to butcher the originals. It's clear some soloists just didn't have the vocal capacity to handle some of the leads; two notable exceptions are Allison Willis in Criminal, and Justin Conner who, while I don't much care for his interpretation of Vince Gill, sings a highly impressive final note.

In ending, let me get a little personal. Shed a Little Light is perhaps my favorite song of all time, and I was excited when I received this album to see it covered. But the singers just don't understand the tone/emotion and don't have the capacity to do the song justice; the harmonies are unsupported and tempos are poorly interpreted. The album is technically beyond reproach. But it's just pretty blah. Purple Haze, loosen up some, and you'll make an exponentially better album next time.