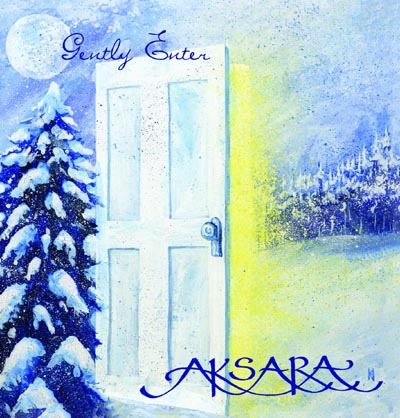 Gently Enter is the musical equivalent of those Hallmark cards designed for grandmas, with airbrushed photos of bouquets on the front and poems in printed flowery script on the inside. Care for a little melodrama with your Christmas carols? AKSARA makes great use of ...

... the pregnant pause. Pauses remind the listener that the song is very deep and deals with important emotional themes that must be taken seriously. At least that's what I figure the eight women of AKSARA were thinking during all the moments where they stop dead in a middle of a song and then creak back into rhythm again. The worst offenders are the four piano instrumental tracks, the first of which features a maudlin poem superimposed on a new-agey piano arrangement. Remember that old Saturday Night Live bit, "Deep Thoughts by Jack Handey"? It's kind of like that, except that I don't think AKSARA is trying to be funny.

The bulk of Gently Enter is by-the-book, repetitive arrangements of traditional Christmas carols. For the most part, AKSARA sings them pretty well, with decent tuning and nice dynamic and rhythmic control. But if you're going to sing the same arrangements every caroler on my doorstep is singing, you've got to distinguish yourself through technical achievement. A lot of technical errors warble along in Gently Enter. The different timbres of the singers (throaty, head-voicey, etc.) often come apart in the blend. The balance is often bizarrely poor; on tracks four, seven, eight, and thirteen the soprano melody is almost inaudible, while a boring mezzo line blares in my ear. Elsewhere (Lo, How a Rose), a vibrato-y soprano wiggles to the front of the blend.

With the exception of Winter Solstice, an unusual pagan hymn well-suited to female voices, AKSARA doesn't do much better on its more adventurous material. An interesting Yoruba carol is rendered in the exact same choral style as the European hymns, with zero West African feel. A quasi-jazz arrangement of the spiritual Mary Had a Baby is equally lifeless.

AKSARA sounds like a solid group, but there are so many excellent holiday vocal albums out there that I can't recommend this one to the general public.

If we were to judge an album by its cover, Gently Enter would be a solid outing. Original cover art and tasteful liner notes nail the visual side. I also appreciated the use of a piano interlude and spoken word piece as a framing device to open and close the disc. Not strictly a cappella, this eight-woman group was often accompanied by piano, with even a few piano instrumental tracks, providing a nice change of pace to this somewhat monotonous set list of Christmas carol standards.

Unfortunately, these details could not overcome more fundamental issues with AKSARA's music. At the basic level, tuning problems plague at least half of the tracks, made more apparent by the occasional piano accompaniment. I have a strong suspicion that the recordings were live in studio with little editing, as I have a hard time believing that any music director could overlook some of the more egregious tuning errors. The problem is particularly apparent in the sopranos, but AKSARA has general issues with group chord changes as well. As a general rule, the lower voices were much stronger in both solo voicings and general harmonies.

The lack of attention to detail was present across the board, with sloppy entrances and cutoffs and disjointed unison rhythms. Blend was problematic at times, with a few particularly warbly voices cutting through the mix; stronger production could have mitigated this to some degree. The group has a slightly tentative sound that serves them adequately on tracks like Still, Still, Still (a particularly strong song) and Carol of the Bells. AKSARA's few forays beyond standard choral songs — an African song and a spiritual — could have used a bit more intensity to truly pull them off.

Ultimately, there are just too many problems to make this album much more than a good stocking stuffer for AKSARA's friends and relatives. Anyone beyond that circle should wait for something a bit more finely honed this holiday season.

AKSARA is an eight member all-female group that has a yogic feel and describes itself as taking "you to wonderful places within yourself as you listen". Gently Enter is a collection of holiday carols that tries to pay homage to the Christmas carol tradition, while staying loyal to the group's new age soul.

The group solidly stamps its character on the album within the first two tracks. The album opens with a piano-accompanied poem written and recited by one of the group's members. The reader's soft, warm alto voice entreats us to "gently enter, sacred is this place" and sets a peaceful, quasi-religious tone for the album. When the group begins singing about the winter solstice and goddesses on the next track, we get a flavor of what's in store.

The song selection is fairly typical of Christmas fare, with the exception of Bethelehemu, a Nigerian carol which gets the sole mark for originality on the album. Except for this song and the piano instrumentals (six tracks feature piano and two are entirely instrumental), most arrangements are nearly identical to the typical high school or college sheet music. The group does include a jazzy yet fairly unsoulful spiritual, Mary Had a Baby, and sweetly modifies We Wish You a Merry Christmas to include Hannukah, Solstice, and Kwanzaa.

AKSARA's singers sound warm and mature. In true carol form, most of the arrangements were sung with sectional solos rather than individuals carrying the melody. Unfortunately, many tracks suffer from chronic pitch problems with both entire voice parts or individuals singing alternately above and below pitch (Winter Solstice and Lo, How a Rose E'er Blooming are two examples). Many of the lush, warm chords don't ring true, which is especially unfortunate for fairly unchallenging holiday fare. The group matches syllables quite well, and when properly tuned, the blend is often good. The group's timing and chord movement is precise, showing the group's choral roots.

The recording work is decent, with ample reverb and a consistent sonic feel throughout the album. The group's diction is very good. The sound engineer did not use a de-esser, however, keeping every precisely timed sibilant loud and clear (Gloucester Wassail, O Christmas Tree).

Gently Enter, though musically competent, is not an outstanding holiday album. Mostly it feels like a group of musically competent, middle-aged women with a casual interest in Eastern religion singing stiff, politically correct Christmas carols with chamber choir precision and street-caroling intonation. But if you like nice holiday music sung by a group of nice women who are occasionally accompanied by a nice piano, or bell, or African drum, you may appreciate Gently Enter for what it is — yet another rehash of the same old Christmas carols, this time with a slightly hokey new age veneer.