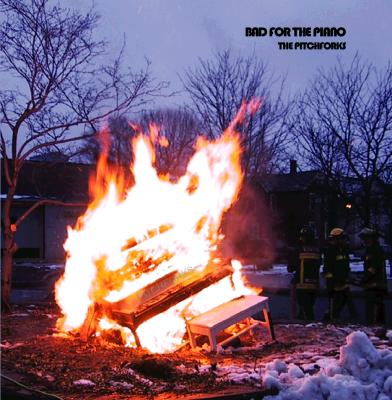 On Bad For the Piano, The Pitchforks, an all-male group out of Duke University, offer up a baker's dozen tracks. The bottom line? Not bad, but needing work in several areas (pitch, rhythm, energy) before the group might break out into greatness.

The tracks range from pop (*NSYNC appears twice) to contemporary alternative (John Mayer, Train) to old school (Boyz II Men). To this variety The Pitchforks apply a rather uniform sound. It's a bit muted, with chords not as crisp as they might be, poppy vowels tending to nasalization, and solid if uninventive percussion hampered by straying basses. Part of the sound's problem, I think, comes from the recording, which doesn't seem to shine. The middle voices are muddy, and the bass is dull, lacking the oomph available nowadays. But in general, tuning and blend are more to blame; the middle voices drag the chords toward mushiness, and the bass sounds naked.

The singers sound more at home on some tracks than on others. The opener, Heart in Hand, is atmospheric and driven; More Than a Feeling is also evocative and apparently heartfelt. But Wonderland suffers from spotty rhythm in the background parts and a soloist whose meanderings (and attempt at vamp) don't help. The Boyz II Men cover is just embarrassing — too slow, pitchy from the start, simultaneously over- and under-emoted, and ill at ease with itself.

But as already noted, this group is not bad. So what's to be done? Rhythm exercises. Performances should almost as a rule be faster (a cappella in general needs speed to make up for lack of range and force). Vowel-matching. All groups need to work on these things. The Pitchforks are off to a good start. With hard work and luck (and a better studio), their next album may break the "good" barrier.

They Don't Even Know, The Duke Pitchforks' 2000 release, didn't wholly impress me. Unfortunately, their most recent album, Bad For the Piano, doesn't show the marked improvement I was hoping for. Tuning issues and unsupported tones mar almost every track, and the arrangements don't do enough to hold my attention when the performances fail to do so.

The tuning on the disc suffers at many turns. If I Am, More Than A Feeling, and Your Body is a Wonderland are the clearest examples, but problems pop up pretty consistently on the whole disc. Within the first three seconds of the disc, poor tuning and pinched, strained tones rear their ugly heads. Even though the lead track gets more solid, the group starts off on the wrong foot. I hear this problem pretty consistently in the higher voices, be they in the background or taking the lead. These guys need to work on opening their mouths more, letting the sound come from their breath and not their throat muscles. It would make their sound fuller, help with their tuning, and make their soloists sound that much stronger and more mature.

Another big problem for these guys is rhythm, and their propensity to let it slide around. The percussion has problems staying with the block, and there are often rhythm issues within the group. Such sloppiness could be worked out a number of ways, from simply paying more attention to it to using a click track in the studio. This general looseness hurts both their upbeat and slower tunes. When the group attempts sharper, dancier songs (It's Gonna Be Me and Motown Philly), they fail to bring enough crisp snap to the backgrounds, favoring a style too relaxed for the track. This overly-relaxed tone also saps the energy from already gentler tunes like Wonderland. Unfortunately, they bring more energy to the Phish ballad Farmhouse, inappropriately ditching the honesty and tenderness that makes the original what it is.

All this is not to say that the disc has no redeeming qualities. The album's biggest boon is Mark Hecker, who raised the soloist score one point by himself with his turns on Steal My Kisses, Drops of Jupiter, and CSNY's Find the Cost of Freedom. He still has a couple weak moments that could be worked out, but his tone is strong, supported, honest, and convincing. Seth Weitberg penned a couple of the stronger arrangements on the disc, #41 and Thinking of You, which has a pretty cool chorus. These songs comprise the peak of the disc, unfortunately buried near the end. I feel the group could have done much more with some of their other arrangements, which are pretty standard, with some odd syllable choices thrown in here and there. There's a great super-high descant in More Than A Feeling. Find the Cost of Freedom is a really interesting song choice, with a word-free solo taking the place of the lead acoustic guitar.

Bad For the Piano has its moments, but there are too many technical problems for me to be able to recommend it.

Bad For the Piano is competent collegiate a cappella at its most reserved. The group has chosen nice, safe songs that don't take big risks, and the group's slow, low-energy arrangements won't exactly take you prisoner.

I think if you put The Pitchforks in a room with big reverb, they could come close to singing this album for you. The Pitchforks stuck to the basics, keeping each song mostly unadorned with studio effects. Most songs feature basic pure vowel sounds and typical collegiate layering of chords. The pitch is good throughout, with a few exceptions that prove The Pitchforks didn't use an intonator much. The vocal percussion sounds very human and mouth-made, and the rhythms are inconsistent. Overall, the feel of the album is personal, warm, and choral (Farmhouse, Somewhere North).

Farmhouse and Steal My Kisses are the most interesting arrangements on the disc. The group breaks its own mold of "oo"s and "ah"s with some "wot days" and "die oom wah dums" in Steal My Kisses and breaks down the bridge into unison parts that scream for a bass solo or audience participation during live shows. Farmhouse layers verses and chorus lyrics and moves into a predictable, yet cute, Bob Marley bridge.

The soloists have decent voices and perform competently, sometimes fighting to breathe life into the undertempo arranging. The soloist in Drops of Jupiter has a soulful, stylish voice, but the bland background doesn't match his energy. The soloist in Wonderland has a smoky, sensual voice like John Mayer's, and is supported with a relaxed but interesting arrangement. Slow songs like Somewhere North, More than a Feeling, and Thinking of You nearly put me to sleep with repetitive backgrounds and boring syllables.

Though the arrangements won't make your heart pound, and the soloists won't win points for musical charisma, the studio work is good, and the group's pitch, rhythm, blend, and percussion are decent. If you enjoy relaxing to low-key tunes sung a cappella and will promise not to listen to Bad For the Piano while driving at night, you won't regret spending some pesos on The Pitchforks.