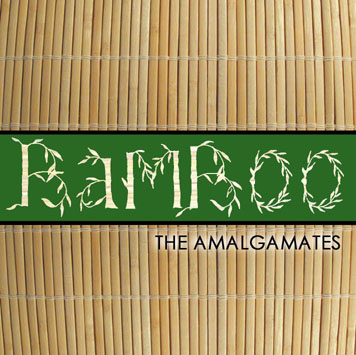 At its best, this album is stunning. The rest of it is fine, too. Definitely one of the best a cappella albums I've come across all year.

Becky Rubin opens the album with her best foot forward, a languorous and soulful rendition of Roberta Flack as re-packaged by The Fugees. Brian Quirk is up next on Crazy Love, with the kind of tenor solo I can't get enough of, aided by a good arrangement with enough space to hear its strength. Then there's Why, the best arrangement on the disc, its accents and obligatos executed flawlessly. I didn't agree with Lisa Jacobs's soap opera approach to the solo, but she makes her choice and sings it well. Her vocal skill still comes through. When she returns with Angel at the end of the disc, she leaves the breathy coquette routine behind and lets her voice truly shine.
[Editor's correction: The solo on Why was sung by Nathalie Wade, not Lisa Jacobs. Lisa did sing the solo on Angel.]

The best songs on Bamboo not only have the best solos, they have the best production. On the weaker songs, the solos are set closer to the background, as if the engineer knew they weren't as strong as the others and tried to hide them in the mix. The lack of contrast on Faded, 3 Libras, and My Stupid Mouth exacerbates the songs' blurry tendency, and drags them down. In contrast, a song like Get Gone puts soloist Jessica Sutton out in front, giving her room to sing without being overpowered.

The Amalgamates have a terrific group sound. It's full, it's got presence, and it has all the pieces of a standout foundation. The basses are strong, the sopranos are ethereal without getting too shrill or breathy, and the vocal percussion is solid. When their best soloists are out in front, The 'Mates are in a league of their own.

Listening to Bamboo is somewhat like watching someone bowl a 290, Tiger Woods place third in a tournament, or Tamyra Gray get voted off in the final rounds of American Idol. It is still undeniably a solid achievement. And yet, in light of what SHOULD be, what COULD be, you can't help but feel disappointed.

To be fair, The Amalgamates' last album Juice was one of the best collegiate albums I've ever heard — certainly, a hard standard to uphold. With Juice, I believed that The 'Mates had figured it all out. Well-selected songs capitalized on their style, and strong production made their blocks sparkle. The harmonies fairly shimmered out of the speakers, soloist after soloist slammed the vocals, and I found myself with goosebumps more often than not. Bamboo boasts only the stunning Angel, with the other tracks ranging from strong to wince-worthy. And thus the group returns to their historic M.O.: putting out collections of solid but largely unremarkable pop covers that always seem to include one or two gems in the semi-rough (e.g., Man in the Mirror, I Don't Wanna Wait).

On the solo front, the majority are passable but forgettable. Without the bite of Fiona Apple, Get Gone seemed more petulance than quiet rage, and attempts to mimic John Mayer's sound and falsetto on My Stupid Mouth led to disastrous pitch problems on the chorus. But there were a few welcome exceptions. The phenomenal Becky Rubin followed up her CARA soloist win with soulful covers of The Fugees and Boyz II Men. As on Juice, Colin Simson turned in the most compelling male performance; this time, he lent his talents to 3 Libras, although the demanding range seemed slightly out of his grasp at times. Yet the real star of the show was music director Lisa Jacobs, capable of ethereal harmony or soulful riffing on duet after trio after background vocal, beyond her own heartrending solo on Angel.

Bamboo also represents an Amalgamates shift beyond their traditional pop-rock repertoire towards an R&B songlist, meeting with mixed success. Killing Me Softly deftly leveraged The Amalgamates' ability to create real drama with block singing; Becky Rubin and Lisa Jacobs answered my doubts about female soloists on Boyz II Men with their capable turns on Thank You (though the song as a whole never quite captured the original's energy and drive). But I failed to see why the "when-will-this-ever-end?" rap song Summertime was ever arranged, and the over-repetitive Faded quickly induced yawns. While I am certainly all for groups pushing their creative boundaries, I would suggest that The Amalgamates think more carefully about their song choices. This wouldn't be such a bad thing to do within the group's "sweet spot" either, considering the similarly spotty performances on non-R&B songs.

For many collegiate groups, Bamboo would have been a solid outing, if not a small triumph. But having seen the heights The Amalgamates are capable of, I couldn't avoid being disappointed. Investing every one of their blocks and solos with the energy, edge, and excitement that the singers periodically demonstrate would push the group towards recapturing the magic they previously displayed.

The Amalgamates have just rocked my world harder than any other new CD I've listened to this year. In fact, Bamboo rocked me so hard, I started to hate it. Too much of a good thing, you know. That lasted for three days. Then, as any good object of obsession finds its way back to the addict, my favorite album of the year (so far) made its way back into a permanent spot in my CD player.

While not perfect in every way, Bamboo has so much going for it that it's hard not to be supercilious in my platitudes about the album. My first complaint about Bamboo was that it only has 13 tracks. I want more! But then again, maybe they knew that 13 is my favorite number. And I don't like being tricked. When I saw Summertime on the track listing, I thought the group had covered my favorite song from the opera "Porgy and Bess", a daring move for a contemporary collegiate group. Unfortunately, it was the DJ Jazzy Jeff and the Fresh Prince hit from the mid-90s — a solid track, just not what I was hoping for.

Terrific soloists are matched beautifully with amazing arrangements. Superior musicality across the voices is enhanced by strong production values. (There was some background hiss on a couple of tracks when I played the album on my computer that wasn't evident on any of my other stereos.) The 'Mates perform a good mix of styles, but could benefit from some uptempo numbers. You could get lost in a blissful haze as one track blends into another.

There are many soloists who do stellar work on the album (kudos to the group for not relying on a handful of singers to carry the album, unlike some groups), but Becky Rubin has to have her name in (virtual) print. Her work on Killing Me Softly and Thank You belie her youth. A commanding presence and mature quality make this girl a star! "American Idol", anyone? No wonder she won a 2001 CARA for best mixed collegiate soloist. Adam Pulver and Colin Simson are especially captivating as well.

If great a cappella music is your drug of choice, make sure you pick up Bamboo for your next fix.