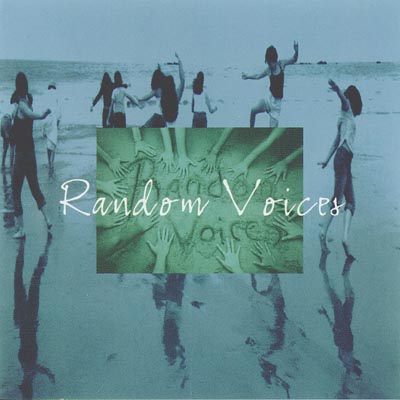 Random Voices is a very winning young group. As the first all-female group at UCLA, they clearly were in a position to choose charismatic and powerful singers. Range and enthusiasm mark most of the voices, rather than careful expertise. Most of the soloists have a raw freedom that's fun to listen to, even on less-than-perfect turns.

Blockwise, RV sounds like the inexperienced group they are. The spirit is willing, but the throats are kinda weak. Even the better songs sometimes wander out of tune by the end of the track. Others (Kiss the Girl) never lock in the first place. Blend within parts, which ought to be fairly easy for a single-sex group to achieve, varies from track to track.

Yet I'm a bigger fan than my scores might suggest. My pet peeve among young women's groups is that too often, they have an apologetic presence. If you could hear the subtext of their performance, it would say, "Um, this note is probably wrong, so I'll kind of whisper it. You don't need to listen; I'll just be over here behind the microphone ... don't mind me." RV doesn't apologize for anything they're trying to do. Their subtext proudly belts, "You better get ready, 'cause it's time for me to sing!". Mais Que Nada and I Want You, two of the less-familiar covers on the album, aren't any great shakes technically, but attitude and personality carry them a long way.

RV has two major areas to improve upon before the next album. First, they've got to listen to some great female groups to work on pop arranging for female voices. While founder Molly Jones offers some solid arrangements, others (More Than Words; You Learn) are overly simple and repetitive. In general, the arrangements are way too high. This is a common rookie mistake for female groups; they try to make up for the missing bottom octave with an additional octave on top. This usually results, as here, in a thin and unconvincing sound. Second, the album sounds very live and natural, which isn't particularly kind to this group. Across the board, the basses are really hard to hear, and the VP has a lot more spit than polish (are those dog-barking sounds on Beat It?). Southern California is home to some of the best a cappella producers in the world; RV would do well to invest in an expert next time.

It's become a cliche for RARB to end reviews by saying, "I can't wait to hear the next album; this group could go on to great things.". This time, it's really true. With the right leadership in the future, these Random Voices have the potential to be anything but.

What can I say about a collegiate debut album that's nearly an hour long, all female, and which mixes It's Raining Men, Wannabe, and Beat It with Respect, And So It Goes, and Galileo?

Well, I could say that it's very random. Instead, I will say this: It's a marathon compilation of a few good songs and many bad songs, most of which UCLA's Random Voices have performed with outstanding energy and average musicianship.

The group has picked at least six songs that have been way overdone in the collegiate a cappella world, but Random Voices manages to use their impressive energy to breathe some new life into old standbys like Respect and Kiss the Girl. Unfortunately, they jam equal gusto into songs that I've always dreaded would one day see the light of a cappella day (Beat It, I Want You, You Learn, and It's Raining Men).

In fact, the best and worst quality of this album is the amount of energy that comes pouring out of it. The ladies sing every song as if it's the last of the concert, and that kind of electricity is tough to catch in a studio. But on tracks like Hazy Shade of Winter, Wannabe (Spice Girls), and I Want You (Savage Garden), the girls are just a little out of control. Whenever the girls just wanted to have fun, the pitch suffered, percussion got weird, soloists got a little unintelligible, and out came shouted girl power slogans and whip-crack vocal percussion.

The arrangements are active and show a good grasp of texturing. Galileo and Freedom are the best arrangements on the album, and Galileo is among the best I've heard of the many covers of this song. Both feature interesting syllables and build well through the bridge, using some dynamics and well-placed vocal percussion. A few of the slow tempo songs (And So It Goes, So Hard to Say Goodbye) don't develop much tension. Also, too often the group relies on the same few old-school a cappella syllables.

The most heartfelt song on the album is ushered in by The Spice Girls and moonwalked out by Michael Jackson. Still, I Love You is the album's most serious attempt at mature emotional musicianship. Though suffering from some pitch and blend problems, at least the ladies have taken it seriously. The result is warm and moving and proves that Random Voices could be more than just random.

This randomness causes other problems, too. The group sports some beautiful solo voices, but only five songs feature one soloist for the entire song. The variety dopes up the album with more energy, but it feels a little ADD (one song actually cites all fifteen group members as soloists).

I would never choose to sing some of these songs that Random Voices has enthusiastically recorded. And I probably wouldn't end an album with a giggly version of Lean on Me that closes with "oh no you didn't". When all is said and done, Random Voices has fun singing, and it shows. I have to respect that.

Random Voices (the name really doesn't help, girls) suffers from the same problems that plague the majority of collegiate groups that have only existed for a few years — namely, a lack of fundamentals. This disc is representative of most groups that enter a studio for the first time — that is to say, it sounds like an attempt to create a kind of audio "yearbook", instead of thinking of the disc as a product to be sold. The result is a recording that seeks to please the group's interest more than the listener's. Proud parents and a few sympathetic friends will feel obligated to buy the disc, but will probably listen to it rarely. There is nothing wrong with the "yearbook" approach if the group is content to go only that far with their recordings. But since Random Voices has submitted the disc for public criticism, I suspect that is not the case.

Vocal percussion is the most noteworthy culprit on this album. To begin, simply saying the word "DOOM!" or "Rigi-digi DOOM!" does not create the same sonic effect as making the actual percussive sound (especially when done in a soprano register). All it does is make the person sound ridiculous. (A suggestion to RV percussionists: Buy Wes Carroll's mouth-drumming video.) On basically every track, the VP is simply too unsteady to help the feel and overall sound of the song.

Minor pitch mistakes in the background will often go unnoticed by the listener (and producer, too), but not sour notes in the lead vocal track. Random Voices can improve their sound drastically by putting more time into getting more accurate takes from their soloists.

The Beatles wrote a lot of great songs. Some of my favorites are Norwegian Wood, Tomorrow Never Knows, and Drive My Car. They did not, however, write It's So Hard to Say Goodbye to Yesterday, contrary to what's printed in Random Voices' liner notes. (I figured it was by Babyface, but it was actually written by Freddie Peren and Christine Yarian — who knew?). Such a mistake reflects the overall lack of attention to detail, musical and otherwise, on this disc. Seemingly little things like cut-offs, phrasing, and getting artists' names right, are crucial to making a better disc.

As the overall score of "2" would suggest, Random Voices needs to work on making their sound less "weak". There are many ways to do this. Next time around, they can improve the tracks by turning up those supposedly "powerful basses", by fixing the myriad VP issues (and turning that up, too), and by singing with more force, energy, and accuracy.

CDs are $10 each, plus $3 shipping. Please make checks payable to "Random Voices" and send to: