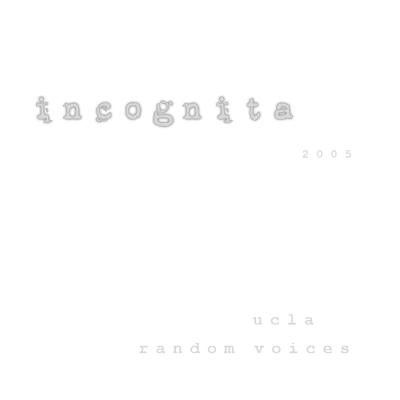 Incognita has things to like, things to dislike, and things to get used to. Make a commitment to the album, and you'll be rewarded.

A common theme on Random Voices albums is soloists determined to put on a good show. The group's soloists typically sing with abandon, to a fault on their self-titled debut. Incognita continues the theme, which is possibly my favorite quality of this group; every soloist seems to pour her entire being into her performance, and often through a rich, colorful voice.

A few soloists go a little overboard, especially on the two opening tracks. It's always interesting to me to hear which songs a group thinks are its best and should lead off the album, but I thought the middle tracks were much better than the two openers.

I think this was a critical mistake of the album. It took me three or four listens to come to appreciate Incognita. I had real problems getting past "this album is over-the-top and cheesy", the stage set by the first two songs. As an album reviewer, I have to give an album more than a passing glance, but possible fans of this group might not be as generous.

Yet these two singers are not entirely at fault. As a song, Prince's When Doves Cry is the some of the poppiest crap ever written while Save Ferris' Goodbye probably requires an over-the-top Gwen Stefani-style solo. Random Voices fans will know how the group got its name; another theme of the group's albums is rather random song selection, a complaint of mine on Random Voices and a notable quality of Danger: Curves Ahead. The three albums I've reviewed all seem to have similar ingredients: a little ‘80s, a little ‘90s, a little 2000s, a little Tori Amos, a little soul, some charming femininity, and a healthy dose of girls-just-wanna'-have-fun silliness.

Incognita is the album of a group that's growing up a little bit. The song selection is more eclectic than random, with less-known songs of greater quality. It's got a little more restrained sass (Goodnight Moon, Sweet the Sting) than previous albums and a little less R&B than Danger: Curves Ahead. I'm coming to believe that this group could pull off pretty much any genre it aimed its soloists' hearts at.

Yet even past the opening tracks, Incognita has a certain "over-the-top" quality. Gabe Mann has added more reverb and delay than necessary, exacerbating occasionally poorly timed attacks and cutoffs, and several songs barely slog through the wash (When Doves Cry, Sweet the Sting, American Girls).

One of my complaints on both previous Random Voices albums was boring syllables. Random Voices arranging is showing increasing sophistication, but a few songs have taken unconventional syllables to an extreme. A quick sampling of syllable phrases that appear on Incognita: "tweedly dee um zah dah wah dee" and "zay guh nah dah wah dah zahdah day oh wah! day!" (Goodbye), "summa numma num bop bop bah dop" (Kiss Me), "jist-uh breathe-uh" (Breathe). These forced syllables feel contrived, while "mee oo" of Goodnight Moon, "I like it said I like it" of Sweet the Sting, and the doo wop ‘50s syllables of You Don't Own Me work nicely to complement the mood. Ladies, don't try quite so hard and you should nail it.

Some ethnic groups lean toward a common soloist tone. The Asian-American soloists I've heard often sing from the back of the throat and sometimes a little nasally. This stylization takes a little getting used to on some solos (Goodbye, Goodnight Moon), and you'll hear it pop out of the blend in a few backgrounds.

After reviewing album number three from a group, I feel the pull of an imaginary relationship. My relationship with Off the Beat, for example, is both awed and frustrated. With The Beelzebubs, it's warm and admiring. I look forward to 'Bubs albums just as I would anticipate having beers with an old friend; I know it will be fun. Though I've never had a conversation with any of the Random Voices, the group continues to surprise me. As the follow up to the unrestrained girl power of Random Voices, Danger: Curves Ahead had me gritting my teeth at the mailbox and then grinning in front of my stereo. Incognita reveals a complex group, one that's intriguing and deeper than meets the eye — and possibly headed for the big leagues of college a cappella.

"Maybe I'm just too demanding". .. but Random Voices' latest release, Incognita, was unfortunately a disappointment. Like Simon Cowell's deliciously evil (and often deserved) criticism of some of the 2006 American Idol contestants, I felt like the execution of most of the tracks appearing here were campy, overdone, and ultimately, like a cabaret act. From the opening When Doves Cry through the final American Girls, there's vibrato where there should be a sustained single tone, overenunciated scat, and an inconsistent use of the bass octavizer.

I think my biggest problem is that many of the arrangements focus on the middle voices. Goodbye's soloist has a decent wail, but because the arrangement is middle-heavy, it doesn't have an oomph that might have been kicked up a notch through better use of the sopranos. Goodnight Moon fares a little better, but the song drags on forever with a mediocre arrangement that's overly breathy and repetitive. Relief comes on track 4, a marvelously soulful rendition of Alicia Keys' If I Ain't Got You. Not that this performance is flawless, but it's a welcome U-turn from the ridiculous melodrama of the first three songs. The simplicity of this interpretation places more emphasis on the solo, and more importantly, the soul. Danielle Aladjadjian's CARA for Best Solo is well-deserved.

Kiss Me is rather jokey, a pop song I've never liked that just seems awkward against the first few tracks. With a weird reverb and uncomfortable syllables, I could pass over this one, along with the silly You Don't Own Me, a yawner in its own right.

The higher voices are more appropriately utilized in the middle and later tracks. Between offers a rolling, punctuated percussion that aptly represents the better of the Random Voices' arrangements with cymbals, kick drum, and snare. The sopranos offer a countersolo to the melody that provides texture against the sometimes pitchy lead. And while The Promise's deep alto solo by Madhurima Gadgil originally caught me off guard, in the context of the piece, it is absolutely enthralling. Tina's Lin's arrangement, with a bass that nearly sounds like a cello, is a delicate, warm masterpiece pulsing with energy and color.

While the women have definitely stepped ahead in their choice of music going from your typical aca-fare to a stronger R&B/alt chick repertoire from their last release Danger: Curves Ahead, the next move will be all about refinement; the Random Voices need to carefully tailor their production values and use of mixing tools to their choice of music and arrangements, perhaps adding in some more effects that fill in the slow tempos or fine tune the problem spots. An overall improvement, but sadly an album that American Idol's Simon Cowell surely would have called the "Random Voices' ticket off the show."

Random Voices definitely deserves the awards, but were I to stop there I would be giving the impression that these talented girls could relax and cruise into next years CARAs when there is still room and time for them to shift into at least one higher gear.

Arrangements are usually on the simpler side, but the thick and gooey blend these girls achieve milks every note for all it's worth. Occasionally syllables are too distracting, though. Most notably, "ven vinga din" in When Doves Cry and "zeyga nanawana zada dayowa" in Goodbye grab huge amounts of attention away from the flow of the song without any discernable justification. Rhythmically and melodically they seem like they should work, but the syllables aren't percussive enough to stay in the background and they aren't close enough to actual words to make linguistic sense. As it stands they remain in limbo and unsatisfying nuggets in otherwise impressive covers.

Something else that I noticed immediately but took me a few days to articulate was, well, their articulations. While the tone and blend of album is pleasing, heavy attacks often create a sort of urgent atmosphere. I found myself envisioning girls talking to their voices like athletic coaches saying, "Come on music, you can do it. Push through it. One more lap then you can hit the showers.". RELAX. The talent is there, the dedication is there, the creativity is there but you can't force your sound somewhere it doesn't want to go.

Solos are fun to listen to with just the right amount of riffing without sounding overbearing. I have to reiterate the Best Female Solo thing; goosebumps every time on If I Ain't Got You thanks to Danielle Aladjadjian. Jeyling Chou also sticks out on You Don't Own Me although I wish she could have spent more time in the middle to lower part of her voice. She keeps building emotion along with the background singers, but her tone became slightly less demanding as a casualty of range. Nitpicky, I know, but seemingly inconsequential observations are necessary so that advanced ensembles can improve.

Drumming is inconsistent across the album, which was distracting. The album opens up with heavily engineered drumming and progresses to comparably weaker live drumming. I emphasize "comparably" because it wouldn't have seemed so if there had been a more consistent style.

Overall, good stuff. Seriously. I dig it. I'm glad to be hearing a lot of confident all female a cappella lately and I hope the Random Voices push themselves to be that much better on the next disc.

To order this album visit the group's website or email the group.