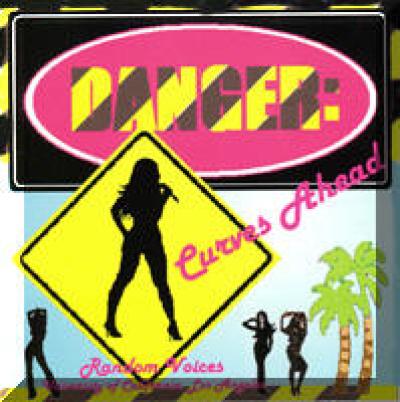 First impressions really do make a difference. I find that my gut reactions to a cappella music are more honest and accurate than later opinion forged through weeks of listening (often much meaner, too). So when I opened the CD mailer from Random Voices, dread oozed from my eyes to the back of my skull, coating my ears in a protective fogginess, then slid down my back to my lower spine, numbing me in preparation for the pain to come.

See above. I think you'll agree that Danger: Curves Ahead has easily the worst album jacket art ever (and a cheesy name as well). Covered with patchy bitmaps and internet-looking clipart, I may offer the jacket cover to my parents as their entry in the Annual Tacky Banquet that they like to attend. If this is part of some retro ‘80s trend in album art spreading from the West Coast, I want nuthin to do with it.

I was further terrified when my wife, snatching the CD from me, pointed out Hotel California, Dust in the Wind, Sheryl Crow's chick anthem, All I Wanna Do, and then played Baby Got Back. Played alone, the Random Voices' sung (not rapped), primly enunciated, downtempo and minor-keyed Sir Mix-a-lot began painfully awkward and stiff, despite a saucy alto soloist. Played all the way through in album order, though, the track is clearly not to be taken seriously and is actually kinda funny in a ridiculous kind of way ("fellas, has your girlfriend goT the buTT?").

In fact, you can't judge a book by its cover. Danger: Curves Ahead has lovely moments. The album is way better than its jacket art led me to prejudge.

The soloists, miked for maximum appeal, have beautiful voices, warm emotion, sensitive style, and good energy. The fervent and R&B tinted delivery of Hotel California, accentuated by trippy beats, brings a new perspective to the song. Danielle Aladjadjian sounds like The Real Deal on hip-hop/R&B tunes Thank You and For All Time. The golden throat of Alegria's soloist seems to have been genetically engineered to sing the lyrics of specifically this song. Were all the soloists this good, I'd deliver a rare 5.

The arrangements are womanly, warm and active, but could build more. The ladies could change up verses and choruses and work to build tension through the bridge (Hotel California and Alegria do best). Songs feature well-spread chords, a smattering of dissonances, and sensible (read: not flashy) syllables. Strong altos and a wisely sparing use of low-end effects belie old adages about all female a cappella. The percussion is hip and fitting. Background vocals are wickedly crisp and clear (especially Dust in the Wind), a testament to the experienced Gabe Mann.

Speak o' the devil, Gabe rescues several songs from near-boredom, contributing panning and tonal effects to second verses and choruses that otherwise wouldn't have varied much. He often kicks the vp and effects up a notch during bridges. In fact, the modified chord progressions, new syllables, and more interesting studio work make several bridges the highlights of their songs (especially: Dust in the Wind, Baby Got Back).

The group's blend is good, but several songs rely too heavily on "ah"s and "oh"s. With syllables this easy, blend should be great. Random Voices should work to blend more smoothly at all dynamics and pitches and then explore a more challenging syllable vocabulary. Better moments include Alegria's "jin jin ah jin jin oh", the legato and instrumental combos in Hotel California, the "Humm" vs. "nah/dah"s of Dust in the Wind, and the hilarious "buh buh booty"s of Baby Got Back (nice touch, ladies).

This is Random Voices’ second album and the first to explore "layered beatboxing and produced effects". I’m impressed with the result; this second album is vastly better than the group’s 2002 self-titled debut. Keep throwing us curves, ladies, you’re onto something!

UCLA's Random Voices picked a good title for the follow-up to their limp eponymous debut from 2002, although a more literal and informative one might have been "Massive Improvement". Or maybe, "This Album is Way, Way Better." Call it whatever you want, Danger: Curves Ahead is all the things the last one wasn't: sexy, confident, and mature. That isn't to say that the album is a must-have, but the steps the group has clearly taken to improve their recorded sound are both quite obvious and highly commendable.

From the first note of Scarborough Fair/Canticle to the last bars of Hold On, the recording itself is rich and full. The balance between soloist, group backing voices, and vocal percussion is excellent. One would expect no less from the oft-lauded Gabriel Mann, who lends his skills admirably to this project. Like many groups that have recently taken their albums to another level, Random Voices was wise to employ the aide of a reputable producer such as Gabe. The result is a product viable for sale. My last review of Random Voices implored the group to re-think their recording endeavors in order to focus on the consumer. Whether spurred by my comments or not, it pleases me to see that they have done so.

Of course, production can only do so much. The most striking aspect of Danger: Curves Ahead is the improved quality of the individual and group performances themselves. Besides the solid BOCA pick, A Sorta Fairytale, the album's closer, Hold On, showcases the tight blend and big sound the group is capable of when at its best. The opener, Scarborough Fair/Canticle, is a good example of the high caliber of arrangements the group seems to be churning out now. The solo-less arrangement by Tina Lin deftly utilizes alternative harmonies and moving lines without straying too far from the mood of the original. Although the track itself is not one of my favorites, Alegria features a commanding, mature solo by Jenise Gragera which makes you forget you're not listening to a professional.

What's left for Random Voices? Well, a few things. While the improvement from the last album is certainly noteworthy, the disc is missing an unforgettable quality to its tracks. As the scores suggest, most aspects of the disc are good, but none are truly outstanding (i.e. no score of 5s). One factor is the bass. Like many all-female groups, the group has a sound that is often top-heavy. Some of the best all-female discs I've heard either use an octavizer or they just happen to be blessed with a deep, booming alto.

Although this album puts Random Voices pretty high up compared to the majority of female a cappella albums, they are not quite among the elite just yet. Nonetheless, if you buy Danger: Curves Ahead, you won't be dissappointed at all. You will like it, but you won't be blown away. If the group's incremental improvement on the next disc is anything like this one, there's no telling how good it could be. My fingers are already crossed in hopes for the title: "Even More Way Better".

The thing about Random Voices' album is that it doesn't impress the way I thought it would after garnering a BOCA track. Danger: Curves Ahead is a collection of typical female collegiate fare, done up rather undazzlingly. Opening dangerously with the slow Scarborough Fair/Canticle that pauses three times after the choruses (making me ask "Is it over yet?"), the album's energy peaks at track 4 and goes downhill pretty much from there.

Moments of pure inspiration are few and far between. Either the soloist is great and the arrangement is bland (Thank You,Hotel California), the arrangement and lead are both just okay (All I Wanna Do, Dust in the Wind) or everything in the track just kinda leaves you with a blank look on your face, wondering "What were they thinking?" (Baby Got Back). Truly, although the Tori Amos track that made it onto the Best of College A Cappella 2005 is one of the better songs on the album, it doesn't live up to the innovative, creative, and interesting pieces churned out by some of our genre's top recordings from women's groups. I have to say I found Alegria heads above A Sorta Fairytale in originality, soul, and passion. Soloist Jenise Gragera invokes a beautiful Latin flair with a clear and crisp intonation. Danielle Aladjadjian also delivers a solid performance with a unique timbre and great R&B turns on two tracks.

I feel that the Random Voices may have been held back by their repertoire for this album and that it may have been more enjoyable for me as a listener to hear these otherwise talented women apply their talents to a more risky, diverse choice of songs. They have a feel for the music they're performing, and Danger: Random Curves is a nice step toward greatness, but for now, their recording is too average overall. Sadly, it even lacks for charm due to the ubiquity of the tracks that have appeared elsewhere, and often. The only thing this album offers is high expectations for what Random Voices may be capable of in the near future.