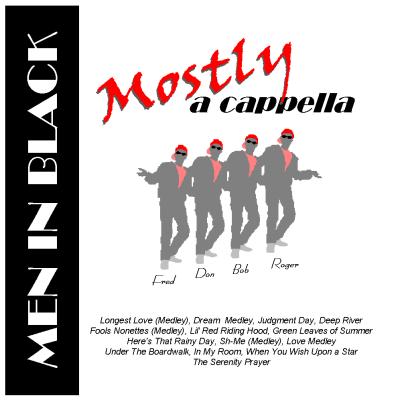 Men In Black represent some of the best qualities of amateur a cappella. They are four men with good voices and a lifelong love of music. They get together, they sing songs, they get gigs, they get pretty good. They go to the studio and make a record — it sounds just like them, or pretty close. Then they send it to a bunch of snotty record reviewers, maybe half their age, who have become spoiled by expensive production and radio-ready pop voices. Oh, dear.

I like the Men In Black voices. In addition to being good singers, they sound like they are old enough to remember a different time, when the songs they are singing were still fresh. They sound charming, and I respect very much the time they put into this group and the arrangements they made. These guys know something about music and have respect for it; they are not a bunch of clueless duffers.

The album's not in tune, though. That pretty much rules it out for anyone who doesn't already know them. It's not unforgivable — you can tell they rehearsed — but it's not perfect. And the no-frills recording style exposes every little flaw. The tuning is good enough for a live performance, but not polished enough for a successful record.

Hire these guys to sing at your church supper, school party, summer barbecue, or community fundraiser. They are cheerful and fun, and I bet you will have a good time. Then you can decide whether to buy their album.

So what if the tuning is so disastrous that at times I couldn't even tell what chord the group was trying to sing? So what if blend is an entirely foreign concept? So what if first tenor Fred Bailey sounds like a strangling cat? So what if they string together unrelated songs into awkward medleys with ridiculous titles? (Sh-Boom + Come Go With Me = Sh-Me???) Men in Black, a doo-wop quartet of mostly retirees and semi-retirees, display an incredible love for the music that nearly transcends their musical shortcomings.

This is what I want to be doing 40 years from now, although as someone who will have devoted his entire life to music, I hope I'd sound a little better. I hope above all that Men In Black, who have been together over 15 years, are not discouraged from doing what they are so clearly passionate about because of the insignificant comments of some cocky 20-year-old. Here's my advice, then: keep it up. But if you make another CD, don't send it to RARB. Save it for your fans and loved ones.

Mostly A Cappella is a disaster, but it's a wonderfully endearing disaster.

While I almost never admit it, I used to be an actor; my second favorite role of all time was that of Smudge, the introspective, waiting-to-be-set-free bass in Forever Plaid. Listening to this album brought me right back to that moment, of singing tight-knit harmonies with three buds and pretending the days of barbershop and doo-wop were still kickin'.

Let's be honest: Men In Black, with the release Mostly A Cappella, aren't going to win any awards, and they aren't going to sell a million copies. It's made very clear by the liner notes that these four guys love to sing, and do it because it's fun for them. And perhaps that is what I took away most from this album.

Arrangements are standard male quartet, whether songs from the original boy bands such as Sh-Boom or Three Coins, newer doo-wop stuff such as The Longest Time, or traditional songs like Deep River. The medleys are nice, but there's nothing spectacular or unique about the arrangements.

The group is led in song by Roger Alm, but don't be fooled: he's no lyrical baritone. His sound is rich and full, slightly gritty, and with a certain homegrown quality that endeared him to my heart. He sings lead on almost every piece, and is comfortable in his role. His sense of pitch is strong, and enjoyable to listen to. The bass of the group has an amazing range, with full resonance to the true depths of the register like a perfect barbershop bass. The top tenor floats above, with a slightly airy and yet slightly tinny sound that completely rounds out the trio. Its obvious these three musicians have a clear grasp of their roles within the group and play them well. The weakest part is the second tenor, whose timbre just doesn't quite match the rest of the group.

The pitch is fairly strong throughout, but certain lines falter such as the majority of Deep River, or the Nonettes medley. Production is almost non-existent, and it sounds like a fairly accurate representation of a live sound.

As I said before, their energy and enthusiasm comes out right from the fore. They are singing to have fun, and it's evident in all they do, which is perhaps why they were such a pleasure to listen to. Maybe I'm a sucker for quartet-style singing, but I enjoyed their album. Nothing fancy, no frills, just music done for enjoyment, the way it should be.