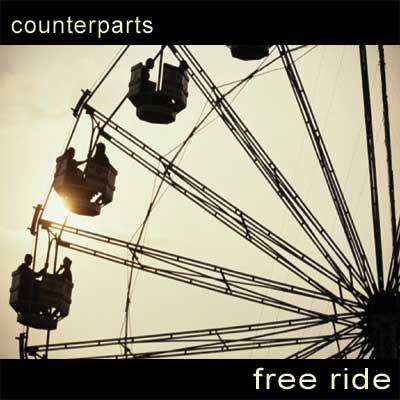 Free Ride is a decent one from beginning to end, full of clean songs. The Counterparts, a mixed group from the University of Pennsylvania, have a history of jazzy interpretations and tight harmony, and their new disc comes from the same mold. The result, despite some tuning problems, is very listenable, if never all-out rocking. This is a good album, but not a great one.

In line with recent trends in collegiate a cappella, The Counterparts have assembled their track list from fairly diverse sources. Jazz standards, '80s rock, '80s new-wave, and more recent pop all make appearances.

The singers sound most comfortable singing songs from the '80s, with backing voices doing the best job. Baris and basses have some timing issues (e.g. the doubled "ddoom" in Father Figure), and occasionally the parts are a shade flat (Side). Soloists are unimpressive. Overall, there is a lack of energy (e.g. I Hope You Dance, All I Want).

At times the arrangements work against the singers. Jazziness is not always good, producing distracting syncopations in backing voices (Father Figure again, Night and Day, Sweet Child o' Mine). The Yesterday medley seems unmotivated, with motion between the two versions hardly seamless. One exception to this pattern is Side; perhaps Yesterday was just a hiccup on Mr. Herrmann's part.

Part of the problem lies in the recording, which is somewhat tinny and dry. The effect is clean, but minor problems stand out. Soloists sound masked, crescendos are rarely allowed to crescendo, and choruses are dynamically indistinguishable from verses. I think much more could be done with eq and making the sound wetter. Percussion is in line with the rest of the sound, that is, unemphatic and muffled (and awful on Yesterday and the otherwise excellent We Belong; use compression next time). As such, it doesn't distract, but is also never punchy (although Side comes close).

All told, a decent album somewhat hobbled by unimpressive studio work, cluttered arrangements, and a general lack of energy. But the album is very listenable.

Free Ride is the latest release from The University of Pennsylvania Counterparts. I last heard The Counterparts on their release Ten. Unfortunately, this album is not a step forward for the group.

The best song on the album is Heavy Cloud No Rain. It has a great soloist and high energy in the group. The rest of the album sounds almost distracted, as if they knew they were supposed to be recording an album, but nobody was really into to it for whatever reason.

Russ Dickhart and Crystal Chukwuma, standout soloists on the last album, are highly underused here on inappropriate songs that do nothing to show off their voices. Sara Pourkay turns in a nice solo on A Thousand Miles but the background is unfortunately hesitant and uncertain. The same goes for Rose Muravchick on Sweet Child of Mine and Jackie Schafer on Ten Minutes ‘Til the Savages Come.

Their straight harmony pieces, like America, a mixture of patriotic songs, lack the tight blend and clean cut-offs that should accompany songs like these.

The arrangements are also a little scattered as well. There is a lot of jumping around with few solid chords to hold things together. This is a decent album, but not one to add to an a cappella collection.

The UPenn Counterparts have been around for a while. With an eleven-album legacy, three BOCA appearances, and the UPenn reputation backing them up, I had my expectations set high for The Counterparts. Though Free Ride is a good album, I was a little disappointed.

Free Ride features some good arranging, production, and soloists, but suffers from inconsistent pitch, blend and some sloppy timing issues.

The Counterparts offer a jazzy rendition of Sting's Heavy Cloud No Rain, a straightforward version of Vanessa Carlton's A Thousand Miles, and a long but worthwhile George Michael's Father Figure. These tracks offer the richest voices and best solo presence on the album. The soloist for Father Figure just oozes creepiness. The soloist for A Thousand Miles has such a pretty, vulnerable voice that her occasional flatness and the background's bad blend become afterthoughts. The soloists for Yesterday and Side fit their songs very well and sing with good presence. The second soloist for Paper Moon nails the pitches in a tough melody. Soloists in the remaining tracks had problems with pitch or presence.

Surprisingly, only three tracks on the album have consistently good blend (Heavy Cloud No Rain, Father Figure, Yesterday). The majority of the album has singers that stick out in both tone and volume. The jazz songs particularly suffer from blend problems. Bright vowel sounds and complete English words in the background cause the most blend trouble (I Hope You Dance, Ten Minutes…).

The best-performed songs on Free Ride are in the blended collegiate/vocal band style. A third of the album features fully eq'd bass and well-mixed vocal percussion accompanying the usual dynamic chords and texturization. The meaty bass sounds instrumental rather than choral. The drum kit sounds are creative and varied; the beats are on tempo and generally in sync with the bass. The delayed drum clack on Father Figure is perfect for the mood. Crisp and Sting-like reverbed rimshots help drive Heavy Cloud No Rain. The mouthy-sounding percussion on Side is a nice touch. Good studio work on both the underlying bass and percussion sounds adds real depth to tracks 1-4 and 9. These tracks stand apart from the remaining collegiate pop and jazz tunes and substantially raise the quality of Free Ride.

Despite the overall good bass and percussion work, Free Ride has some problems with rhythm and cutoffs. The bass and kick drum early in Father Figure are off. The bass is a little shaky in pitch and rhythm during Side. The walking string bass in Night and Day is unconvincing after the fat bass of the first four tracks. The jazz songs feature a wetter group reverb that accentuates missed cutoffs (verses of Night and Day, intro of Paper Moon). Several of the pop songs have some cutoffs that sound indecisive. Lastly, America, the final track of the album, should have been cut off the album entirely. The blend, balance, and pitch have widespread and serious problems.

As a whole, Free Ride is a good album from a talented group. I will be curious to see if The Counterparts move more into the collegiate vocal band sound that shines here.

If you'd like a copy of Free Ride, please send a check or money order for $15 to: