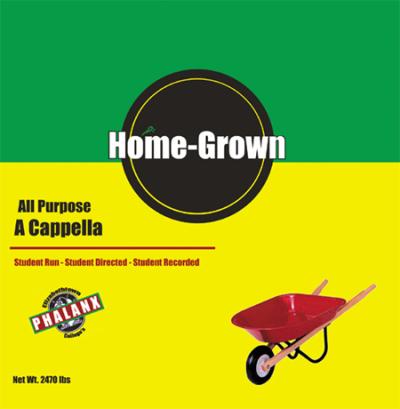 Home-Grown is the finest Phalanx release yet. Infectious, testosterous energy propels killer leads through perfectly intonated arrangements and groove-laden, driving beats. Above and beyond the group's talented performances, kudos must be heaped upon the nascent engineers, John Bilich, John Uhl, and a cappella's ubiquitous elite engineer/producer and Jedi master, Gabe Rutman of Asylum Recording Studios. The combination makes for serious repeat play.

With Phalanx, it's about the leads (stupid). Every solo is a winner, and a few are just downright rightous. At the top of the pile are Joe Anzuena's gritty tenor stylings on Your Love, Pride, and Black Sheep. Simple when he needs to be. Layin' it down when there's layin' down to do. These three alone are worth the purchase price.

Adam Brophy is credited with all the VP. That's pretty impressive, considering Phalanx calls for everything from kick-snare '80s rock to Double-Dong R&B punk-style beats. It's great stuff.

On the down side … well, there isn't much. The perfect tuning is a little artificial, but that's par for the course these days. And besides, Phalanx' exuberance more than makes up for leaning heavy on the AutoTune.

Home-Grown sounds anything but. This is the stuff of champions.

Home-Grown is a labor of love for the men of Elizabethtown College's Phalanx, but it is the baby of graduating senior John Bilich. John took on the task of learning how to use recording software and hardware and laying down the tracks for all but three songs. Those three tracks were recorded at a studio, but the group didn't have enough money to continue. The story goes on; the three-page insert is dedicated almost entirely to the making of Home-Grown.

Reading between the lines, I get the impression that John Bilich was the motivating force behind the album and a big reason it sounds so good. Of course, it helps to have raw vocal talent (see any solos by Joe Anzuena or Adam Halpin) and the mixing and mastering talents of Gabe Rutman. (Gabe is clearly capitalizing on the CARA/BOCA gold that his magic has produced for past albums by accepting unmixed albums from all over the country and mixing/mastering them himself. Smart guy.)

Home-Grown lacks some of the polish and precision of entirely studio albums (such as The 'Bubs' recent and amazing album Code Red). However, it is an entirely listenable album.

Phalanx has come a long way from their last album I reviewed, Vision. Phalanx's latest production is a surprisingly good homegrown garden of contemporary a cappella.

Home-Grown, the latest album from Elizabethtown College's all male group Phalanx, is solid, but left me cold. While their ability is apparent, the production has created a very impersonal sounding album that just didn't connect with me.

First, I must give tremendous credit to these guys, who recorded the CD completely on their own, with their own equipment; the talent and effort that went into that process must have been incredible. They are also a talented and experienced group. Their arrangements are solid, but fairly standard fare with nothing particularly innovative; the strongest work is by John Bilich on Parallel Universe. The soloists are also solid, but not exemplary. Bilich manages to shine on the original I'm Still Always Here for You by Jonathan Sears, along with the passionate Joe Anzuena on Black Sheep.

Ultimately, however, I found the final product unflattering to the group. Each and every note on this 45 minute CD is perfectly in tune; however it's obviously artificially produced. It sounds as if every single sound has been auto-tuned. While this produces stunning intonation, it leaves the voices lifeless. The basses have no focus to their sound at all, making each bass line sound like an organ or synth. The vibrato is completely wiped from all sustained notes, and even shorter percussive notes sound sampled and tuned. The end result to my ear was very artificial-sounding, like early '80s progressive rock with synthesizers and power chords (think Styx or Kansas vocals). This is especially a problem on the slower songs with longer, sustained chords, such as I'm Still and Black Sheep, where the lifeless vocals make the songs excessively boring. Percussion also loses its power and is mixed discreetly into the background. This effect is very effective on some songs, such as Your Love and Broken Wings, but is inappropriate on others.

So all in all, a decent album, but the production left it unpalatable. The songs and the voices lose all their personality, intensity, passion, and emotion, and every song sounds like the next. It's like hearing your favorite carols played on a Casio Rapmaster. It just loses something in translation.

For ordering information, visit the group's website or order from Mainely A Cappella.