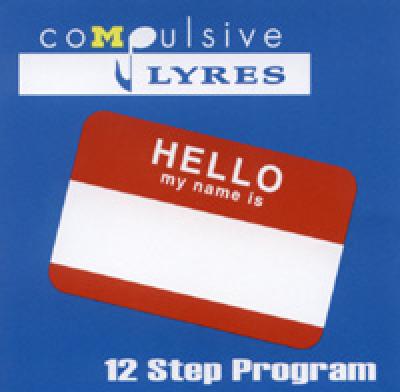 The University of Michigan Compulsive Lyres are exactly what one imagines from the phrase "collegiate a cappella". The soloists are good throughout, the arrangements are largely block chords over simple vocal percussion, and the styles and interpretations of the original songs are largely kept intact. In other words, 12 Step Program has merit, but for the most part, it's all been done already.

Inside Out, Torn and Africa are the CD's first three tracks. That's followed by covers of Alanis, Dave Matthews and U2. The disc even closes with That Lonesome Road. These are great songs. That's why everyone covers them. But because these songs are so ubiquitous, The Lyres' arrangements suffer from a more exacting scrutiny.

Unoriginality aside, The Lyres have a warm, lyric sound and engaging soloists. The intonation, I suspect, is studio-perfected, but I dare anyone to find intonation correction artifacts (that's tech speak for unnatural, and usually unintended, side effects from using pitch correction). In other words, The Lyres' uncanny intonation sounds quite natural, unlike, say, From the Edge's Pub Night in South Central Czechoslovakia.

The vocal percussion could have more oomph to it. The overall dynamics could be brought out more. The bass could have been just slightly more present in the mix. The upper voices blend nicely. The production is clean and tasteful.

In the realm of classical music, originality is far from a necessity and in some circles, it's even shunned, with the focus instead on realizing the original vision of the composer. Rock, pop, jazz and their derivatives concentrate on invention and originality, even at the expense of basic musicality. The Lyres are a very musical group, but to live up to their chosen genre, they should invest more time into their own sense of style. I look forward to hearing their voices as artists and not simply singers.

The eagerly-awaited 12 Step Program by the 2002 ICCA winners University of Michigan Compulsive Lyres is a bit too pretty, a bit too clean, and a bit too unoriginal. Despite the appearance of all three of the songs that appeared in the championship-winning set, their encore piece, and a BOCA 2002 track (Fiona Apple's Limp), the album is unexpectedly disappointing in light of The Lyres' record of excellence.

12 Step Program is a nice collection of The Lyres' hits. The songs most often sound sweet and bright, good for some tracks (Torn; Africa) and inappropriate for others (Inside Out; Stay). Really, you've heard all these songs somewhere else, and often done better. Torn is indeed attributed to the SoCal VoCals' BOCA 2000 appearance, Hard to Say I'm Sorry is a dead-on copy of the Az Yet/Peter Cetera collaboration, and Vox One's Over the Rainbow is identical to the original.

Matt Salter's arrangement of Limp is his only piece heard here, and it is by far the best track, closely followed by Hard to Say I'm Sorry. Despite the song's lack of creativity, 2002 ICCA Best Soloist Jesse Nager nails the solo beautifully and more than makes up for the merely so-so leads on the other songs. I also enjoyed arranger Rob Humbracht's take on Alanis Morrissette's Hands Clean and Stuart Naylor's solo on Superman.

The Lyres' attempt at novelty left me dissatisfied with the results. For example, I'm always wary of pieces whose originals prominently feature an instrument. The Devil Went Down to Georgia is largely lost in translation because the vocals and "fiddle" sound so similar. Over the Rainbow and I Still Haven't Found What I'm Looking For fare better, but as mentioned earlier, are really slight variations on what other groups have already perfected, the latter by U2 and the Boys Choir of Harlem in a lesser-known version. Unfortunately, I Still Haven't Found What I'm Looking For lacks the power and intensity audiences experienced at The Lyres' 2002 live performances.

All in all, a decent compilation. A note to any group who wants to produce Africa and That Lonesome Road on a future album: these songs are so overdone they detract from the overall appeal of a CD. I would rather get eight tracks to review instead of having to listen to each of these one more time. 12 Step Program is only a small leap forward for this former giant of collegiate a cappella.

The University of Michigan Compulsive Lyres established quite a reputation as live performers en route to their ICCA championship in 2002. The ensemble clearly is blessed with good singers, a strong work ethic, and a desire to be the best. Studio work is a different beast, though, and The Lyres have yet to master it well enough to reach the top of collegiate a cappella.

12 Step Program is a good album. But it's not great, and here's why.

Production values on 12 Step Program don't do The Lyres justice. Well-matched vowels, good intonation, and consistent tone and timbre suffer at the hands of poor mixing. Eight of the twelve songs are affected by severely problematic volume levels of both soloists and backing vocals. Overall, the mixing lacks depth, image, and subtlety.

Krista Luli's arrangement of the Eve 6 anthem Inside Out kicks off the CD with a bang. Production and performance are the best right from the start. But the rest of the songs don't live up to this immediate promise. Alanis Morrissette's Hands Clean, with a cutting, edgy solo by Susan Dailey, is the only one that comes close. Rhythmic accuracy and vitality struggle after the opening piece; hiccups and stutters occur because beat alignments between the percussion and vocals aren't quite there. Tracks 2 through 12 just don't hang together as effectively as the opener.

Arrangements are adequate, though it's clear some of them are not original to The Lyres, including the dirge-like Africa, rehashed Hard to Say I'm Sorry and gospel-influenced I Still Haven't Found What I'm Looking For. The flow of the CD is abruptly disrupted by the contrived The Devil Went Down to Georgia and a stilted, unrefined rendition of Yumiko Matsuoka's stunning arrangement of Over the Rainbow. Whatever momentum had been built up before this point is lost.

The Lyres have put together a good album. Rock-n-roll serves them better than jazz or R&B or choral styles. If you buy this album, expect strong ensemble singing, well done, straightforward rock, appropriate tone, tuning, and timbre, good energy, and an above average product. But don't expect greatness — yet.

CDs can be ordered through the Compulsive Lyres website.