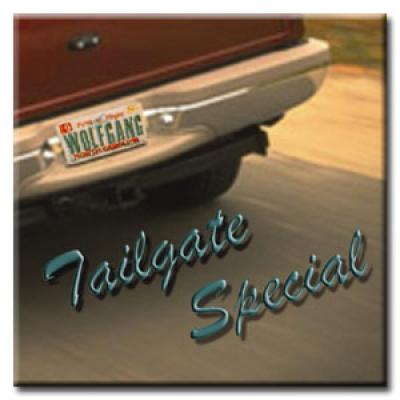 Back when modern a cappella was still something of a novelty on college campuses (beyond glee clubs and barbershop quartets), groups relied heavily on enthusiasm and energy while they were finding their way with repertoire, arrangements, soloists, and overall musicianship. Unfortunately, it was this bit of nostalgia that kept popping into my head as I listened to Tailgate Special, the second album from North Carolina State's Wolfgang.

I have little doubt of the more than two years' worth of effort and energy that the group expended in producing this CD. But the basic elements of solid a cappella musicmaking are simply not present on this album. Intonation, tuning, arranging, and production are all problematic on virtually every track, and no amount of enthusiasm is enough to overcome these handicaps.

On the most fundamental level, the group needs to work on its singing — intonation on an individual level and tuning on a section-by-section, and later, overall group level. For a group that favors arrangements with many moving parts (more on that later), this affliction is especially deadly and shows itself most often in busy bass (Special; Every Little Thing She Does Is Magic) and soprano lines (Heads Carolina, Tails California; Kokomo), in which crisp and precise tuning is sorely lacking.

That said, it is no wonder that the two strongest tracks on the album are ballads: Vanessa Carlton's Ordinary Day and Dido's Here With Me. The group does quite well with the simple, chordal backgrounds featured in these two tracks and the solos in both cases are excellent. But so much of the rest of the album could serve as a primer for pitfalls to avoid in a cappella arranging. Some of the missteps are instinctual and common — a overreliance on ba, dum, and doo, and a tendency to try and duplicate the original, accompanied version of the song by replicating each and every note played by the various instruments (especially on the opening two tracks). Some are more theoretical — voicings at extreme ends of the harmonic register leaving an uncohesive arrangement sounding empty and scattered (Del Amitri's Roll to Me is only one example), and so many moving lines that the harmonies are lost and the "busyness" of the arrangement overwhelms (too many instances to enumerate). This final point is particularly bothersome and is well demonstrated by the final two tracks on the album. The mellow, island-influenced, classic Beach Boys tune Kokomo gets a thoroughly overcomplicated arrangement, with an insistent and overbearing soprano line and an overall background that almost obliterates the melody. Scooby Doo is the most basic of basic arrangements, but the song is well-served by the simplicity.

Lastly, this mediocre album could certainly have been somewhat improved by a knowledgeable and experienced producer/engineer. I'm certain this is not true, but it almost sounds as if the engineer turned on the mics, hit "record", and walked away. Of course, good studio work is no substitute for good singing and arranging, but there are moments peppered throughout this album when you will perk up with incredulity and wonder, "How could the producer/engineer let that go?". Suffice it to say, a bit of attentive mixing and even the slightest bit of craftiness with vocal processing could have rendered some of the album's errors far less egregious.

Every group has to start somewhere, and at six years old or so, Wolfgang is still a relative newbie on the a cappella scene (especially in North Carolina!). So while this effort is not up to snuff, here's hoping they use the mistakes of the past as building blocks toward the future.

It's back to the drawing board for North Carolina State's Wolfgang. Tailgate Special sounds like it was recorded after a few too many keg stands.

I hate panning college albums; so much love and labor go into even the worst ones. Sometimes, though, I have no choice. This album sounds sloppy across the board. Many soloists are lazy when it comes to pitch and energy, the production sounds close to nonexistent, and a lot of the blocks are just a mess. The result is an album that sounds like it came from a high school group. I have to serve up a special slice of blame to the men, who tend to be very disunified within their parts. At least once per song, the tenors get bored with the group key and decide to take a little detour into a new key that exists only in their heads. Or maybe they are practicing their part for the next song. At any rate, what they're singing has nothing to do with one another or the song.

I often review tracks that start out solid and deteriorate by the second chorus. Wolfgang has the opposite problem; many of the tracks start out at a 1 level, and over the course of three minutes, coalesce into a 2 or even 3. Soloist, block tuning, and energy all improve during Everything You Want, Freshmen, Heads Carolina, and others. I wonder if the group didn't have enough studio time to do multiple takes and get comfortable performing each song. Even if that explains the improvement within tracks, many opening chords are such disasters that I don't understand why the director proceeded with the take. I kept conducting cutoffs in the air and wishing I could tell the group to start the tune over and pay attention to the pitch pipe this time. If you can't nail the first chord of your song, you shouldn't be taking it out of the rehearsal room, much less booking a recording studio.

The playlist is baffling. The strongest soloists, Zack Kitto and Erin Hayes, get only one full song apiece, and those tracks are buried in the middle of the disc. If I weren't working for RARB, I would never have heard the best work on the album, because I would have given up hope after hearing the first three tracks.

Here's my advice for the group. First you need to hear what a great album without a lot of expensive production sounds like. Get some older CDs from groups you admire, or recent CDs from old-school groups. (I'm thinking along the lines of early-'90s Beelzebubs and mid-'90s Off the Beat for the former category, and The Krokodiloes or Nassoons for the latter.) When you're on retreat, play them to the group along with your own recordings and talk about the contrasts and how you can narrow the gap. Then build up your fundamentals by workshopping some basic numbers, even if you never intend to perform them. You need to get solid on In The Still of the Night before you can be solid on Everything You Want. So take some simple four-part arrangements of workhorse songs — you know, Brown-Eyed Girl, The Longest Time — and drill them in rehearsal until you have them RIGHT. Nitpick. Fine-tune. Split hairs. Then you can start moving on to more challenging pieces. It's going to take a lot of time, patience, and sweat to bring your group to a higher level, but the investment is well worth it.

Tailgate Special sets the standard for collegiate a cappella mediocrity. The arrangements are unchallenging but energetically sung. The soloists are mostly unpolished but pretty tolerable. Pitch, blend, and balance are fine, but not great. All in all, Tailgate Special isn't bad, but neither is it good. It falls squarely in the middle, redefining my sense of a cappella averageness.

The album feels amateurish. The syllables, almost entirely ba, doo, and oh, are just about as basic as you get. The background during These Are Days alternates rapidly and almost exclusively between ba and doo for 176 consecutive seconds. The vocal percussion ranges from decent at best, with good drum sounds and rhythmic consistency during Here With Me, to hilarious at worst, with something that sounds an awful lot like "Goo! Kat!" during the end of Ordinary Day. I hate to cite incorrect liner notes since they don't affect the recorded material, but Wolfgang actually forgot a song on the back of the CD case (went straight from 10 to 12, guys). Lastly, there is virtually no reverb or tweaked equalization on the album, and soloists are a little too prominent in the mix.

The arrangements, often featuring repetitive, sustained soprano lines, active ba-ing in the middle voices and doo-ing in the bass line, are fairly easy. Wolfgang does not layer chords as much as other groups, nor do they incorporate dissonance. The arrangements are reasonably active, though, with verses that support soloists' vowels and choruses that bounce around. Each arrangement builds to some degree, but some stall in mid-build or end weakly after the climax, leaving me emotionally unfulfilled.

Wolfgang sings energetically throughout the entire album. The group clearly enjoys singing a cappella and sings each ba and doo fervently. The soloist on Ordinary Day has a warm alto voice that has good color and style. She sings well, but doesn't build emotionally through the song. The soloist on Let It Be has a cute and pure voice, almost childlike, with a pleasing vibrato. Other soloists are unremarkable in their finesse or style and have some pitch issues, but they sing like they're trying hard.

When all is said and done, Tailgate Special feels like an honest effort. The lack of fancy arranging tricks and newfangled studio work combined with earnest singing lends the album a sense of honesty — it sounds like a bunch of college kids havin' some fun while doin' some singin'.

But should you buy it?

For ordering information, visit the group's website or email them at cd-purchase@omniplane.com.