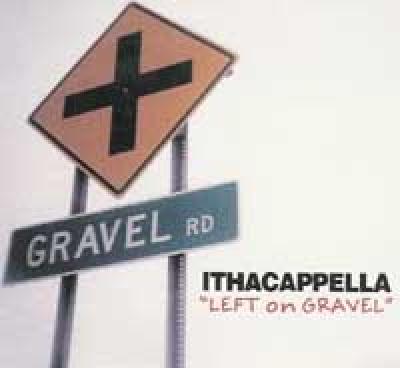 When I read the liner notes for Ithacappella's sophomore effort, Left On Gravel, I had no idea how prescient they would prove to be. You see, the album's title is derived from the group's experience on a road trip in 2001 whose most distinguishing feature was that the group was involved in a major traffic accident involving a wrong turn on gravel road. I must admit that this seemed like a rather odd way to commemorate an event which, but for a good deal of luck, could have been a far more tragic incident. As it turns out, and somewhat unfortunately, the album's title is quite apropos.

Simply put, this album is anything but smooth driving. At times, it's a fender bender and at times it's a full-on, ten-car pileup. The guys of Ithacappella have fallen prey to a whole host of pitfalls that might have been more forgiveable in the colleagiate a cappella world, say, ten years ago, but in this day and age, really are almost inexcusable.

Repertoire: it's not the first time I've made this point in a review, but groups generally can't sing everything — and on this album, that concept is taken to a real extreme. In one stretch (in order), the listener gets Bouncin' Around the Room by Phish, followed by a classical choral setting of an Edgar Allen Poe poem, followed by a medley of Madonna songs, followed by Kenny Loggins' Return to Pooh Corner, followed by a classical setting of a Holocaust poem, followed by Linkin Park! Yikes! Hey, I like variety as much as the next guy, but there is no way an album is really going to hold together when the repertoire and running order are as haphazard as this. Ironically, on their website, the group seems acknowledges how widely divergent their repertoire choices are. Unfortunately, they don't realize how detrimental it is to their album.

If the arrangements were fabulous and the singing were great, all would probably be forgiven. Sadly, they're not.

The group is 21 members strong — they're officially the Ithaca College Men's Chorus and trying to be a more typical a cappella group at the same time — and yet, on many tracks, you'll struggle to hear more than 8-10 voices. The final Guster track is a possible exception to the above — a basic but functional arrangement in which the listener gets the full "oomph" that the group has to offer. Still, in general, the arrangements of the modern/pop/rock tunes are quite rudimentary by today's standards, featuring predominantly "bum", "doo", and "bow" syllables, voicings that rarely, if ever, jell into a cohesive whole, and movement patterns that are often at odds with one another. The latter problem leads to a great many rhythm issues throughout the album, both within the background voices, between soloist and background, and between vocal percussion and everyone else. Attempts at medleys, such as the aforementioned Madonna one and a later medley of cartoon theme songs, rely way too much on their solos at the expense of the arrangements, which are almost non-existent at times.

The classical singing fares somewhat better, though the pieces themselves aren't the most compelling. Didn't My Lord Deliver Daniel has some zip, but the arrangement is not one I'm familiar with, and the guys seems to have some trouble keeping the modulations in tune. Loch Lomond and I Believe fare OK as well, but these, as well as Dream Within A Dream (the setting of the Poe poem), pretty much stop what little momentum the album has dead in its tracks.

Not to pile on, but there are rampant tuning issues throughout the album as well. Soloists fall flat or sharp with some frequency and ensemble tuning and diction in the non-classical pieces is also loose at best. Lastly, the liner notes explain that the album was recorded in Presser Hall in the J.J. Whalen Center for Music. It's impossible to tell what sort of room the hall is, because the engineers of the album have gone to great lengths to vary the processing on a song by song basis — unfortunate, because I could otherwise blame the mixing issues on acoustics. But it seems that a great deal of the album has been knowingly (if not purposely) mixed into oblivion, with the sound quality on some tracks sounding more like the album was recorded in my closet.

On the up side, to be fair, the group was only founded in 1996, and perhaps they have a bit of catching up to do. These are talented men who made a noble effort, but fell a ways short. On the down side, reading through the RARB reviews of their first album (only after I'd written all but this paragraph), this new offering is plagued by many of the problems that reviewers noted on the first one. Nevertheless, if they can sharpen up their arrangements, limit their repertoire a bit, focus on their tuning, and find a good studio, I'll still be very interested to hear what they have in store for us next.

Ithacapella is a group of about twenty men from Ithaca College. Left On Gravel is their second offering to the world of male collegiate a cappella (you can check out my review of ...the Band Never Showed). With the exception of the hideous hidden track, they are innoffensive, which is neither a good nor a bad thing.

They don't assault me with terrible pitch, but they don't blow me away with their precision. Their arrangements aren't filled with crazily conflicting vowel sounds, but they aren't very interesting either. Their soloists don't make me cringe, but I don't get little tingles. The percussion is reminiscent of the early days of duv-kuhs and shu-kahs, with the exception of some more interesting sounds in Immaculate Medley and In the End.

All in all, Ithacapella is somewhat glee-club. They are nice guys. They sound good. They have a nice blend. They are probably entertaining live, especially with their Tune of Toons (my favorite track, a mix of cartoon theme songs ranging from Teenage Mutant Nijna Turtles to Ducktales to Gummi Bears) and the The Muppet Show Theme. They have a large repertoire. But I can't even make my standard quality over quantity argument, because all these songs are about the same...

What is missing here? There is a certain level of jelling that just isn't there. There isn't much umph. Or, as my little Chinese mother would say, there is no "chi". It is the difference between watching a prima ballerina and a member of the corps de ballet.

Left On Gravel is a solid album, but lacking in distinction.

Ithacappella's Left On Gravel is a classic yearbook CD, fine for family, friends, and fans, but with nothing much to offer the average a cappella listener.

Amateurish studio work is the biggest problem here. Part balance is poor, with grating, repetitive background parts frequently drowning out the melody. The album's overall sound lacks clarity and oomph, especially on the vocal percussion. And the Immaculate Medley (yup, Madonna) features the most inept use of AutoTune I've ever heard. Essentially, the engineers just turned on the plug-in and let 'er rip, seemingly without tweaking any settings whatsoever. In a couple of spots, the soloist's pitch is even bent to the wrong note! Ouch! So badly did the engineers botch this one that the hidden track, a torturous "Fun with Pro Tools Plug-Ins" mix of said medley, is actually more listenable than the listed version.

The group is impressively versatile, tackling standard glee club fare, Linkin Park, and everything in between with approximately equal success. The actual repertoire choices, though, are a little stale, all songs I've heard a cappella many times before. Either Way, a song I love despite how overdone it is, is sabotaged by wrong chords in the arrangement and by soloist Jamie Paisley's choirboy falsetto. This song requires someone who can really wail on the high notes, as Greg Binstock so memorably did when The Beelzebubs covered it. Ithacappella's doo-ba-happy arranging isn't going to win any awards either, though some cool stuff goes on in Scott Seltzer's arrangement of Love the One You're With. And at 17 tracks (two of which are Ralph Vaughan Williams's interminable Loch Lomond and a tedious 6-minute cartoon medley) and almost a solid hour, the disc is almost impossible to listen to in one sitting.

All that aside, Ithacappella is a pretty decent group. Soloists are solid; special props to David Stills for Ain't No Sunshine. Tuning is generally good, as is energy. Rhythm gets a little sloppy in the busier arrangments (I'm a Believer; Love the One You're With), but is fine for most of the album. The group has a great feel for spirituals, but on the two featured here, feel seems to come at the expense of intonation.

Left On Gravel shows promise, but it has too many flaws and too little interest to earn my recommendation. A good engineer and a more exciting set list should be the biggest priorities for Ithacappella's next release.