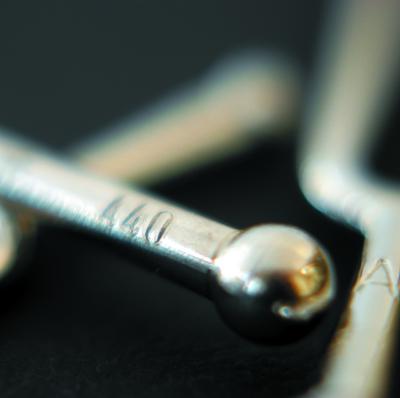 This album is a glowing testament to the a cappella establishment, to the miracle of a national base of producers, arrangers and expertise. It's also a pretty good listen.

The singers of Germantown Friends High School have put together a stronger album than many college groups. Compared to the college records of just a few years ago, it would be in the top 10 percent. Much of the credit goes to the singers, clearly a talented bunch who invested a lot of sweat equity in these songs. Still, the album's success owes almost as much to the arrangers who donated songs and the producers who made the most of what was available.

The fabulous opening track shows all of these attributes, in spades. The women of Double Treble sang the song, a cappella stalwart Samrat Chakrabarti contributed the arrangement, and producer Jim "Jiff" Hinger used an octave doubler, generous reverb and a host of other tricks to elevate this song into one for the ages. Further down the disc, a range of production levels gives a good idea of how these singers sound on their own, compared to when they have the full weight of a talented producer behind them. Even at its height, this album doesn't have the polished sound we've come to expect from the best a cappella. But the album does carry a sense of excellence just the same, and deserves some top recognition.

Once again, GFS pools its talent from three ensembles: the all-female Double Treble, the all-male Bufftones and a coed collaboration of the two. As expected, the women have a better sound, but the coed numbers are slick too. The boys are not without decent solo talent, Taylor Brown delivering my favorite performance on Anyday. The female solos are uniformly good, although in some cases (Pride, Rio) they are so produced as to throw into question their underlying performance. Kelly Bixby continues to shine on MLK and 'Cille Songhai turns in a nice turn on Newborn Friend. Songhai's track shows Double Treble in their unproduced glory — although significantly more flawed than the produced numbers, it shows that Double Treble has some great voices and even some good percussion chops.

Some listeners may take issue with this album's inconsistency. Over the course of the 11 songs, the tuning ranges from gratingly natural to artificially impeccable. Personally, I liked the variation because it gave a better sense of how these singers sound and the breadth of their experience. I did, however, take issue with their interpretation of Sarah McLachlan's Good Enough, a melancholy downer of a song that turns up here as a triumphant inspirational ballad. Technically good, but artistically grating.

On balance, this is a very nice album and a poster child for The Contemporary A Cappella Society. With a few free arrangements and the phone number of a good producer, a cappella excellence is more accessible than ever before to anyone willing to put in the effort.

Oh, happy day. It's a reviewer's joy to see a group with a learning curve like this. 440 is lightyears past GFS A Cappella's previous "Best Of…" album on just about every level. A collection of tracks from The Bufftones (all-guys), Double Treble (all-girls), and joint coed efforts, 440 benefits from stronger tuning and better production, while maintaining general excellence in soloists, arranging, energy.

Four out of the eleven tracks are live and for the most part showcase GFSers' fundamental singing ability, sans studio tricks. While tuning issues cropped up in most of them, I was particularly impressed with the powerful and compelling Good Enough, which benefited from a remarkably mature solo by Julia Alexander. In general, the young women of GFS step up to the plate effectively. Highlights include 'Cille Songhai's impressive range on Newborn Friend and Kelly Bixby's lovely soprano tones on MLK. This is not to say the guys are subpar, but they do tend to suffer a bit more from tuning and breath support issues. That being said, Takin' Care of Business was one of the more fun live tracks I've heard in a while. I'll bet The Bufftones put on a great show.

Director David Buffum's arrangements are simple but effective; the album supplements them with a number of superstar guest arrangers (e.g., Samrat Chakrabarti's Pride via The Hyannis Sound, Sid Khosla's Don't Stand So Close To Me via Off the Beat, and the venerable Deke Sharon's Rio). GFS A Cappella somewhat handicaps themselves by covering these songs; while solid, I found the first two fall a bit short of the energy and intensity of the originals. David Buffum is more than capable on his own, with a good ear for which songs benefit from busier arrangements and when simplicity is best. Special props for reimagining U2's MLK as an all-female number — it was stunning.

I'm not sure if collegiate a cappella has undertaken real recruiting efforts yet, but people might want to keep their eyes and ears open for these singers. I'm sure their talent and energy would be a welcome addition to any group.

The kids are all right.

Hailing from Pennsylvania's Germantown Friends School, GFS A Cappella has produced an album comparable to, and in many respects better than, the typical collegiate group recording. Credit the singers, credit director and choir teacher David Buffum, and credit the engineers. In that order. The album features 11 songs from three GFS ensembles: the all-female Double Treble, the all-male Bufftones, and the combined co-ed group. Each group on 440 is presented in both the studio and live performance setting, with mixed results.

There are a number of moments on this disc where you simply forget that the recording you are hearing is the product of high school singers. Everything about this disc is mature for its age. On all but a few songs, the group demonstrates lively dynamics, classy blending, solid tuning, and energetic sololists. Highlights for me were The Bufftones' Anyday, with a solid solo by Taylor Brown and a confident, tight backing cast of male voices, as well as the coed choir's take on Good Enough, which was chill-inducing thanks to a great live recording and elegant arrangement by Mark Rosenbaum. Just about any collegiate ensemble might be proud to boast these two tracks on their own album.

That's not to say there aren't moments of carelessness or youthful error. The opening track Pride (In The Name of Love) is a rather lethargic re-working of Samrat Chakrabarti's arrangement for my group, The Hyannis Sound. This rendition lacks energy and relies on minimalistic and inexperienced percussion. The studio sounds take the arrangement to new places, but the performances are ultimately less than supportive. Other tunes, such as Land of Confusion and Rio, are notably sloppy and rhythmically stilted from time to time, yet show a tremendous energy and enthusiasm.

Should you buy this album? That depends. On one hand, you'll be impressed at how strong a disc this is given that the performers are high school students. Regardless of age, the album deserves a 4 for being good, overall. On the other hand, there are better recordings out there for at least three of the arrangements on this disc (the aforementioned Pride, Off the Beat's arrangement of Don't Stand So Close To Me from BOCA '99, and Deke Sharon's Rio arrangement). If you are a member of a collegiate ensemble looking to improve your recordings, I'd say this is a must-buy — you older dogs might be able to learn some new tricks.

For ordering information, write to: