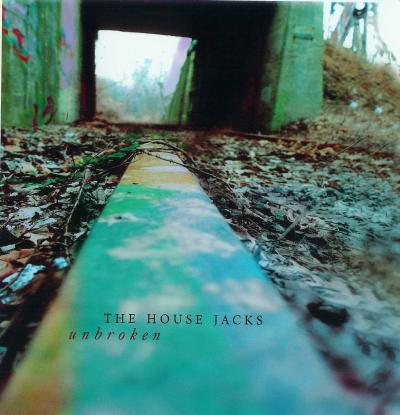 I can't remember the last time I had something negative to say about The House Jacks. I'll state it right up front: like so many of us, I'm a huge fan. And what's more, it really wouldn't be fair of me to suggest that with their fourth album, Unbroken, The House Jacks have taken a step backwards. Sideways, perhaps. Or maybe they've just stepped through some sort of rift in the a cappella continuum and into a parallel universe. Such are the conflicting thoughts that nagged at me as I listened, and re-listened, and re-listened to this wonderfully complex, technologically ambitious, musically diverse but ultimately unsatisfying album.

In their own words, Unbroken is an attempt at "studio craft reminiscent of the glory days of XTC and The Beatles: each song melts into the other, creating not just a collection of songs, but a sonic voyage with ten enticing destinations." Those are some pretty heady aspirations, and while I applaud the guys for trying to raise the bar of what an a cappella album should be (as they did for live albums with Drive), I was disappointed that this offering did not quite live up to my or their stated expectations.

First off, it's very, very short. 10 songs. 33 minutes and 18 seconds. Now Lord knows, I'm a huge critic of groups that take endless repeats of final choruses and whose arrangements play on the same opening riff ad nauseam with no further musical development. But so much of what I enjoy of The House Jacks is their musical inventiveness — grabbing the listener with a solid groove or melodic hook and developing, building and expanding that musical idea over the course of a fully realized song. Several of the songs on Unbroken feel formulaic: verse, chorus, verse, chorus, bridge (often seemingly truncated), chorus, segue (often awkward) to next song. It's possible that this is part of the "sonic voyage" idea, but if I take a 10-city European tour, I want to stay in Paris long enough to appreciate the Eiffel Tower. Only in a few instances — Deke's Adventure Day, Deke & Garth's absolutely gorgeous After You (screaming to become the next overdone collegiate cover), Wes' sweet Middle Ground and the simple, but very clever Good Things — did I feel satisfied before the group had moved on the next tour stop.

What's even more frustrating is that a great deal of the inventiveness that can be found on this album is presented in the form of studio wizardry and not within the music itself. The House Jacks were among the firsts to use the tricks of the recording trade to challenge our definitions of what a cappella could offer, so I can't and don't begrudge their continuation of this tradition of gimmickry. But in the past, the integration of voice and machine has been essentially seamless. The bells and whistles were integral parts of the music-making without being overbearing. On Unbroken, the magic of Bill Hare — of whom I am also a big fan — is ever-present, and too much so for my ear. When the basic elements of the material itself become less compelling than the way the material has been manipulated, the music suffers and I lose interest.

Lyrically, the group remains at the top of their game, with especially moving, poetic imagery in the ballads. Still, I will admit to missing the musical and verbal funkiness that Andrew Chaikin always brought to the table as well as the intangible edge that this album seems to be lacking. Indeed, to my ears, there is an over-arching philosophical, conceptual filter of sorts that seems to have been applied to Unbroken. It's mellower; it's more pensive, more reflective. A reading of the liner notes sans musical accompaniment yields a mood that is generally downbeat and borderline bitter with life's lessons of love. To be fair, as the guys get older, the maturity that comes with marriage and family is bound to show up in their compositions and performance. The fact that I won't let go of their hipper, edgier, wilder image may indicate that I'm behind the times and not them. And a slightly overreaching House Jacks album is still head and shoulders above 95% of a cappella today. Still, this is probably not what you were expecting. For some, that may be a good, even exciting thing. For me, not so much.

I'm overcome by a sense of deja vu. The House Jacks release a CD. The soloists rip the leads in half. The arrangements do more with five voices than a lot of arrangers do with twelve. The production screams its way across the disc. The sound would fit right in on contemporary rock radio. I review the album and give it a 5. Then it happens all over again.

My favorite track has to be Adventure Day, Deke Sharon's joyous pop number about spending the day with your kid. I always loved the rather quirky old HJ songs like Erotica Bazaar and Attitude. This one has a similar sense of humor, applied to a very different topic.

The two things I disliked about Drive are still around. Sometimes the lyrics get a little cheesy, especially on the ballads. The Jacks still don't tell you who's singing which solo. That's about as critical as I can be.

Although you can't tell from the scores, I actually liked the live album a lot better. Audience-artist interaction creates a special magic that Drive captures better than anything else I own. If you're looking to pick up one House Jacks album, that's the one I recommend. If you're planning to buy them all, which you should, you won't regret picking up Unbroken.

As popular as The House Jacks are, this album should damn well bring them even more love. But prepare your ears and mind for a captivating adventure day. The sequencing and effects may make you question what's for real, but after you listen to the album you won't care. maybe that's the reason everyone should own this recording — you can listen to it from sunday through the end of the week and come back for more. stop and think for a moment about how many CDs you own that you listen to straight through without skipping a track. With so many good things brought to life on this album, lyrically and musically, there really isn't any middle ground of generic mediocrity. The House Jacks' consistent excellence creates an Unbroken string of finely constructed, provocatively engaging, and undeniably hip musical expression.

Audio clips and online ordering of this and other House Jacks albums can be found through the House Jacks web site.