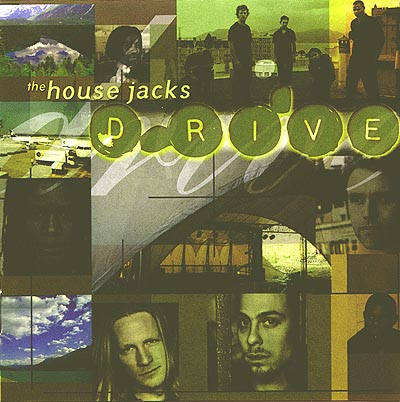 If you've heard The House Jacks before, then you're already a fan and probably already have this album. If you've never heard them, then get Drive now.

This disc shows off the best of what a cappella can be. Just from listening, you can tell that these guys are having fun on stage. On this live album, they capture the audience and feed off of their energy to put together a great show. Everything is tuned just right, which is really difficult to do live.

I know I've had trouble with live tracks on CDs before, but that is because they weren't done right. The House Jacks figured out the secrets to recording live. First of all, this isn't a recording of just one concert. It is the best from several concerts performed at different times. This technique allows the artist to pick and choose what goes on the final disc. You can't expect to perform an entire set perfectly every night. Secondly, the audience is not intrusive. There are no inappropriate screams in the middle of songs that make listeners feel like they're missing something. The best thing about Drive though, is that there is no doubting that these guys can reproduce the same sound when you go see them. There are so many albums that are overproduced so much that no one can believe that the group can sound that way live. While this album does have some studio tricks on it, it is still a live album, which means that these guys go out night after night and sound just like what you hear.

Another thing to point out is that most of the tracks are originals. The House Jacks are part of a small cadre of a cappella groups that write their own songs as well as arranging already-popular music. What stands out the most, though, is that their originals are better than their covers. I enjoyed Around and Drive Into You much more than Crash Into Me and So Far Away.

I urge any a cappella fan who doesn't already own this album to go out and get it soon. The House Jacks have produced one of the finest examples of a cappella that can be heard. It is also one of the best live albums I've ever heard in any genre. The House Jacks take you from your living room stereo and transport you to a concert hall somewhere in Germany without missing a beat. This is a great album.

I have no pithy openings, no one-liners, no wacky metaphors to start my review. If you read my reviews with any regularity, you've probably just fainted dead away. Frankly, I think there's something wrong with me. I'm a critical person. Overly critical. Hyper-critical, if you will. I can find fault with just about anything. This time, maybe my ears are clogged. Maybe my stereo is broken. Whatever it is, my feelings about The House Jacks' latest effort, Drive — a CD recorded live during tours in Europe and the US — are plain and simple. It's fantastic.

It's not that Drive is perfect. It comes pretty darn close, but it's not. As live albums go, however, it is the best-quality pure a cappella recording I've ever heard. Sure, there are tiny flaws which even skillful editing and post-production can't hide, but we're talking microscopic, barely perceptible, and very infrequent glitches, the kind most a cappella groups would kill to have as their worst problems.

And it's not even that I like all of the music on Drive. I don't. To be honest, my least favorite songs on the CD are a few of the originals. But even on those tunes not to my liking, the songwriting ability demonstrated — both lyrics (Stephen Sondheim, meet Andrew Chaikin and Austin Willacy) and music (Sting, meet Garth Kravits and Deke Sharon) — is noticeably superior to so much of what passes for modern, original a cappella rock/funk/r&b music these days. Much like SoVoSó or even Zap Mama (albeit with a far less international feel), there is a level of musical sophistication to The House Jacks which makes them always interesting, even if they are not always enjoyable for me.

But the covers? Watch out! True, Jacks founder Deke Sharon could probably toss out covers by rote at this point after his college days with The Beelzebubs, his arranging service through CASA, and his years with The House Jacks. But with age comes elegance, and there's no question Deke is the best at doing more with less. Now, I know there are purists out there who shudder at the thought of gifted musicians "wasting" their time re-hashing music whose most definitive interpretation will likely always be instrumental. To them I say, check out Father Figure or Sign Your Name. Mind you, I have no reason or incentive to kiss Deke's ass, and to be fair, the arrangements are credited to Deke Sharon and The House Jacks. But safe to say, the guy has made covering into an art form.

If you're in an a cappella group, you don't just want this album. You need this album. Use it as a primer for how to make your group stand out from the pack. Check out the chorus repeats at the end of Bam! and discover that just because you're taking the final chorus three times doesn't mean that all three iterations have to be identical. Listen for the quick hint of Sexual Healing earlier in the same song, or the madrigal-esque transition into the funk/hip-hop section of I Want It All, and you'll find new ways to incorporate musical "jokes" into your repertoire without sounding forced. Check out the varied syllables, rhythms, and harmonies in the background voices for almost every song, and you'll no longer be concerned that your group doesn't have enough people to create a full, rich, textured sound. In short, buy it, study it, use it.

If you're not in a group and you're just a fan, buy the damn album anyway. You'll love it.

If you're in a hurry, a concise version of this review may be obtained by reading Drive's "Repeat Listenability" score. If you have a couple of minutes, and don't mind wading through a protracted analogy, read on for the extended version.

When I was growing up, I kept hearing everyone talk about how great Shakespeare was. Teachers made it sound like it would be against the law to say he wasn't the greatest writer of all time. By the time we hit Shakespeare in eighth-grade English, I was practically hoping I would hate it. I thought it was boring and conformist to agree with what all the grownups told me. Anyway, nothing could possibly be as good as Shakespeare was said to be. Then I read Hamlet, and holy cow... Shakespeare really IS that good!

I thought of eighth-grade English as I listened to The House Jacks' latest album, the all-live Drive. Conventional wisdom says that The House Jacks are the defining vocal band, the oft-imitated originals, the standard by which all others are judged. Deke Sharon, founder of both CASA and the Jacks, is the closest thing we have to a head honcho in the a cappella world. It would've been kind of fun to write a controversial review ripping the album to shreds. I could accuse The House Jacks of being a cappella Backstreet Boys with no substance beneath the hype, or some such cliche. Then I could congratulate myself for defying the crowd and bravely breaking the truth to my readers without regard for the consequences.

But you know what? The House Jacks really ARE that good. Sometimes conventional wisdom actually gets things right. The House Jacks are a fantastically talented and hard-working group, and this studio-perfect live album proves it. How do they tune so well in the middle of a world tour? How do they scream and rock without ever edging out of flawless lockstep? How do they manage to combine crystalline VP, thudding bass, and honey-sweet tenors into a unified sound? Do they realize that they are making all the other bands look bad?

Drive has a couple of small problems. I'm not a big fan of love ballads in general, and The House Jacks are sometimes a little self-indulgent when it comes to cheesy love-song lyrics. I was also pretty darn annoyed by the lack of solo credits in the liner notes. But mostly I'm just glad to have gotten the album to review. If I hadn't, I might have made the foolish mistake of not buying it. Drive is a must-have. Don't miss it.

Available from Mainely A Cappella